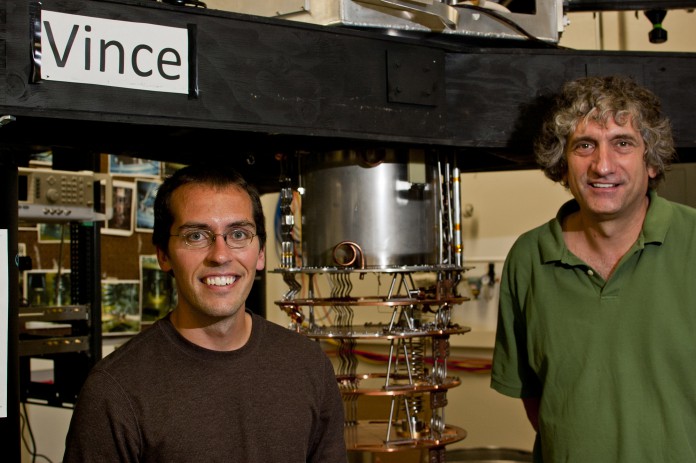 Upon taking a relevantly closer step towards quantum computing research, UCSB physicists have further affirmed that UCSB truly is one of the nation’s premier research institutions. Physicists from UCSB’s Martinis group, led by Professor John M. Martinis in collaboration with Professor Andrew Cleland, have recently struck gold by creating the successful entanglement of 3 quantum bits (qubits) of information in the solid state.

Previously, only work on 2 qubits at a time has been achieved. Before delving more into the Cleland-Martinis group’s 3 qubit accomplishment, going back to Physics 101 would be most helpful in order to clearly comprehend the magnitude of the group’s discovery.
According to How Stuff Works, computers function within a binary system. Binary, silicon-based computers can only read two commands, “0” and “1,” and these cannot be taken in at the same time. This means that for data storage, a computer today can only do either “0” or “1” and not both.
With the fast pace information and ideas are exchanged, modern man’s lifestyle necessitates faster processors as his technology need advances. This is where quantum computing comes in.
The term, “quantum” refers to atomic particles or anything dealing with atoms. Consequently, in quantum computers, the power of atoms and molecules are harnessed to carry out memory and processing tasks. Unlike its predecessor, quantum computers are not limited to two states; they encode information as qubits (atoms, ions, photons, or electrons and their respective control devices) that can co-exist together.
This ability to inhibit multiple states concurrently makes quantum computers perform commands and calculations at a much faster rate than even the supercomputers of today.
According to How Stuff Works, “Entanglement” is what scientists use to make atoms capable of holding more than one state. Outside force is applied to two bonded atoms, which in turn causes a reactionary movement of atoms being entangled.
The UCSB physicists have discovered a way to make 3 commands simultaneously occur with very minimal loss of data.
Professor Martinis recognizes that although quantum computers would take around 10-20 more years to be realized, the group’s findings have laid down the basic Physics experiments towards the path on learning how to scale up to more and more qubits.
“We have learned two things from this. One is how to put more qubits together. If we know how to make 2 or 3 then we can replicate it to scale higher. [Two] is enhancing coherence – making quantum operations work without error,” Martinis said. “The materials we use in these experiments have defects that leak into the final output. Learning how to remove and solve these defects will aid in our research that would then enhance coherence.”
Matthew Neeley, one of group’s grad student members mirrored Professor Martinis words.
“ Our medium-term goal right now is quantum error correction. Quantum states are fragile and decay easily,” he said. “The task at hand is keeping the quantum state at a level where there is no more space for error.”