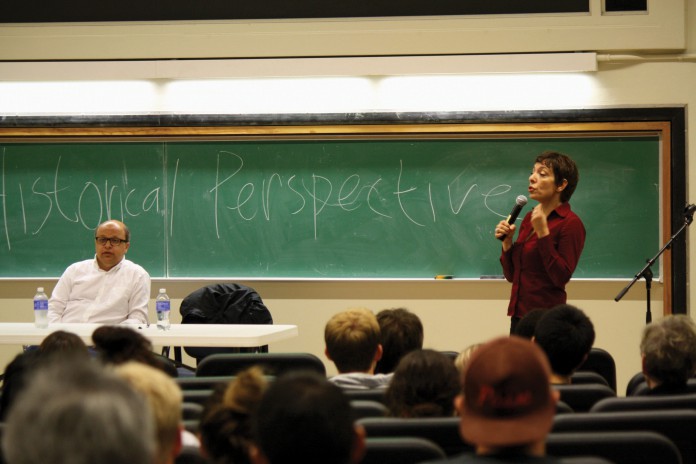 “A historical perspective gives us the tools to reject the dangerous claim that ISIS is the inevitable outcome of Islam,” said University of California, Santa Barbara assistant professor Sherene Seikaly, during a talk entitled “ISIS: A Historical Perspective,” held on May 20 in Buchanan Hall.

“The… thing to keep in mind about ISIS is that is does not emerge out of thin air,” said Seikaly. “I’m trying to locate ISIS in a broader ecology of cruelty.” Seikaly’s discussion focused on the formation of ISIS as influenced by a combination of Arab authoritarianism and United States intervention.

Seikaly began her portion of the talk by pointing to the U.S. use of depleted uranium in the battle of Fallujah, which she noted caused high rates of cancers, like leukemia, and birth defects than were found in a post-nuclear Nagasaki.

“Fallujah was effectively emptied of its population and destroyed,” said Sabra, also noting that the U.S. began recruiting many Sunnis successfully during their occupation of the city.

Seikaly also noted the high rates of mass incarceration, torture, and long-term detention of Iraqis by U.S. forces. Those that would become leaders of ISIS and similar groups, Seikaly stated, were able to build alliances in these prisons.

“This group [ISIS] does not emerge out of a sudden Islamic tendency for beheading,” Seikaly said, before elaborating on the role of authoritarian regimes in the region. Seikaly noted a deep kind of sectarianism in the region—some of which was organic, some of which was incited by the U.S. as well as Iranian and Saudi Arabian governments. “These different interests benefit from a lack of unity,” she said, pointing to the ways in which tensions between Sunni and Shiite groups have been aggravated.

Seikaly gave a brief overview of the 1991 war in Iraq, a US reaction to invasion of Kuwait by the regime of Saddam Hussein. After the war, the US imposed heavy sanctions on Iraq.

“The outcome of this war was devastating on the Iraqi people,” said Seikaly. “They were subject to one of the harshest sanction regimes in recent history. Those who paid the price for these sanctions weren’t those in the regime, but the people of Iraq.

“I would argue that he came the closest to a totalitarian regime in the Middle East,” said Seikaly. “He was very dedicated to controlling the public and private lives of Iraqi citizens—with the full support of the U.S.”

Sabra found that ISIS is, in many ways, an offshoot of Hussein’s regime. When the U.S. entered Iraq and removed Hussein from power, they also began firing those that were employed in his regime, including his secret police and other state officials.

“ISIS has simply taken on the methods, organizational structure, et cetera, from Hussein’s secret police, pretty much cold,” said Sabra. “The only difference is ideological.”

Seikaly also had interesting points that would contextualize the actions of ISIS themselves, such as the immolation of Jordanian pilot Moaz al-Kasasbeh and beheading of Miami-born journalist Steven Sotloff. Again, Seikaly located these incredibly violent actions in a broader context of violence.

Al-Kasasbeh was part of a Jordanian force working against ISIS; when his plane went down in Syria, the group kidnapped him. Later, ISIS released a video of al-Kaseasbeh speaking to the camera before he was burned alive.

“It looked like a very well produced Hollywood film,” said Seikaly, “it has several cameras, a script, very high production value.” After this video, ISIS released a video of Sotloff’s execution.

“In these videos, there’s an attempt to respond, to talk about who is in charge of torture, who has power,” said Seikaly, pointing to U.S. influence on the nature of the released videos.

“Some of this intense fetish for violence is coming from the leaks of torture that are coming out of Guantanamo Bay and Abu Ghraib,” said Seikaly. “Some of it is coming out of Hollywood, particularly the images of violence against Iraqi bodies.” Seikaly cited American Sniper as an example.

Sabra also further spoke to the nature of ISIS and its actions during his portion of the talk.

“ISIS is a kind of newborn of Al-Qaeda in Iraq,” said Sabra, though he was careful to note several key differences between ISIS and Al-Qaeda, such as ISIS’s focus on the “near-enemy” as other Muslims in the Middle East, while Al-Qaeda focused on the far enemy, namely the West.

The two concluded the talk by fielding several questions from the audience, including those about the financial stability of ISIS, which they discussed as largely funded by selling oil and stolen antiques, and the possibility of a Kurdish state.

The talk was primarily organized by UCSB’s History Club, with help from Phi Alpha Theta, a history honors society. “We had great collaboration with both the Political Science Society and department,” said Darren Chen, a fourth year history of public policy major and one of the organizers of the event. “In fact, the UCSB Political Science Department agreed to fund the entire talk despite the fact that it was being presented by history professors. Their help and collaboration was definitely my favorite part of organizing the talk.”

“The event was solely advertised by social media,” said Chen,  “I believe it became popular… [because] we presented the topic from a historian’s perspective as well as the fact that we organized the talk in light of recent events.” The event listed 379 attending on Facebook, exceeding the organizers expectations and prompting a move to a larger venue.

Chen’s co-organizer, Grant Stanton, a third year double major in history and political science, spoke to their motivation to give a historical grounded talk. “People understand vaguely what ISIS is and what they’re doing but not remotely as much as to where they came from and the underlying tendencies that gave rise to such an explosive and global force,” said Stanton, “this isn’t just a single, political, event but rather it’s the fruition of years and years of disparate historical forces manifesting themselves in violence.”