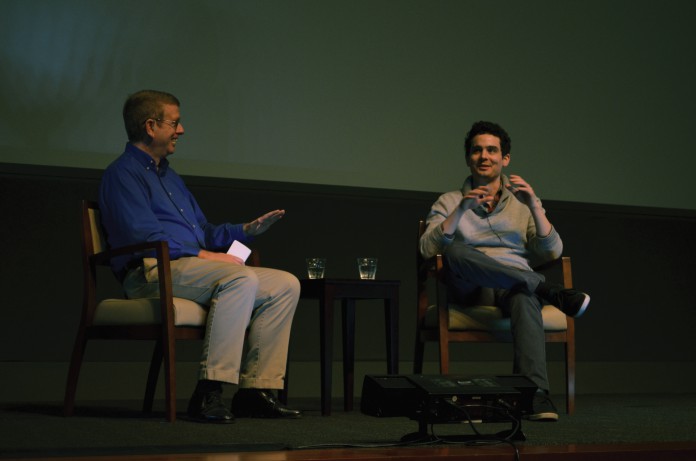 Students and non-students alike gathered on Saturday, Jan. 31, at the Pollock Theater for a special screening of the Oscar-nominated film Whiplash. As part of the Carsey-Wolf Center’s “Script to Screen” series, a Q&A was held with the film’s director and writer, Damien Chazelle.

The film is about the relationship between a drummer named Andrew, played by Miles Teller, and his instructor Fletcher, who is played by J.K. Simmons. Fletcher is a notoriously stern and cruel instructor at a top-level music institute who only wants the best from his concert band. When Fletcher gives Andrew the opportunity to play in the band, Andrew’s dreams are questioned when he is pushed to the limits and beyond by Fletcher.

From the very first scene, Whiplash lives up to its name by taking you on a roller coaster of emotions that doesn’t let up until the final cut to black. The film is nominated for an Oscar for Best Adapted Screenplay, and boy did it earn it. It’s unpredictable and powerful, and so deeply grounded in reality that it almost hurts to watch some scenes. The ending, which was met with thunderous applause in the theater, forces the viewer to question how they feel about the events that unfolded throughout the film, and how they feel about themselves. The characters are well-developed, complicated people who we as viewers can never decide whether we are supposed to like or hate.

This is made all the more powerful by the incredible performances in the film. While Miles Teller did an amazing job with his emotional portrayal of Andrew, it was J.K. Simmons who really stole the show. His portrayal of Fletcher goes from genuine to bitter and from heartfelt to angry at a moment’s notice, and with absolute ease. His charisma steals every scene he is in, and his power begs for your attention every time he is in the frame. There really is no question why he is nominated for the Oscar for Best Supporting Actor, as he nailed this performance. The film is worth seeing for his performance alone, not to mention the countless other merits it has going for it.

This brilliant film is also nominated for Best Picture, and after having watched the film it is pretty clear why. Whiplash is much more than a movie about jazz drumming; it is about the balance of motivation with humanity. It questions how far it is worth going to be the best, and whether or not it is even worth it. The film is a moving, sometimes disturbing look at what ambition and determination can do to people, and every second of it is dripping with quality.

Equally as impressive as the film are the conditions in which it was made. An unseasoned writer and director, Chazelle had no funding for the film, and ended up making a short film out of one of the scenes just to secure funding. He already had J.K. Simmons on board at that point because Simmons had read and fallen in love with the script, and Simmons stuck by the film that would earn him his first Oscar nomination. On top of all this, the film was shot in just 20 days due to its limited funding, according to Chazelle. The film was a very personal project for him, though.

“It’s slightly autobiographical,” Chazelle told Matthew Ryan during the Q&A. “I was a drummer in high school, and I had a teacher who was kind of like Fletcher.”

Chazelle went on to describe how going into band practice felt like life and death at times, and how he wanted to translate that idea to the film. Taking into accounts the merits that Whiplash has accrued, it’s clear that he succeeded. I never thought a movie about drumming could be so tense and thought-provoking. I highly recommend checking this movie out.