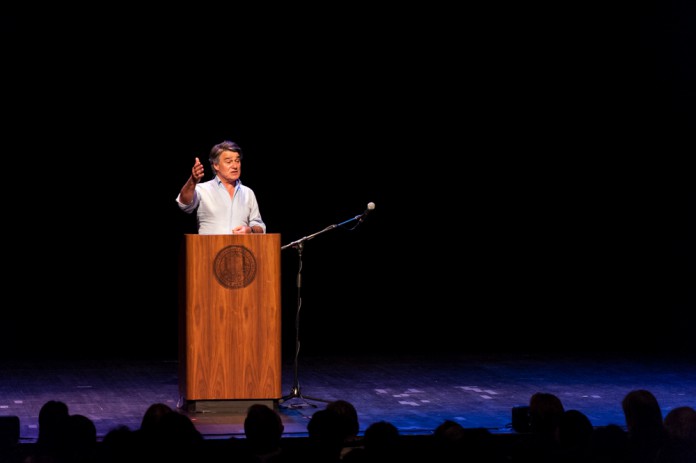 Campbell Hall was packed and abuzz with excitement on Wednesday, May 4, as University of California, Santa Barbara Arts & Lectures presented David Whyte’s talk, “Solace: The Art of Asking the Beautiful Question.” The poet, author, and inspirational speaker Whyte presented a lecture melded around his poetry, most notably from his recent release “Pilgrim” (2012).

Whyte’s poetry and storytelling, laced in a hypnotizing Irish drawl, is nothing short of transcendent. From a youth of studying business and marine zoology, Whyte’s imagination and constant love for poetry cultivated a unique creativity within him. Whyte has been a transformative voice in the world of poetry, philosophy, and corporate advising.

The lecture focused on a question that we all seem to ask: the “beautiful question.” Whyte proposes this beautiful question focuses around an identity, or unspecified significance, that we aim for. But pushing toward an answer should lead us just to new questions. Whyte spoke of the meaning of “solace” as to convey the ability of asking questions even in the hardest situations–to shape our own identities by having the courage to ask, and dare to cross over a “frontier existence,” a limited one.

The theme of the night was pilgrimage, a journey with a specific destination, or to set off for an unknown horizon that tempts us with fulfillment–a big fat symbol of the giant, beautiful question that we all ask ourselves. The specific centuries-old Christian pilgrimage Whyte’s story centered on, El Camino de Santiago, served as a catalyst in the realization of the eye-opening effect of such a journey.

As finishers of the pilgrimage reached such “ends of the earth”–in Whyte’s story it is Finisterre, Cape, the westernmost point of Spain’s mainland–there exist three rituals one should partake in. The most emblematic ritual is leaving behind something that one took on their journey. Whyte spoke of a woman in his life who inspired his poem “Finisterre,” who left behind her boots, a pair that had lasted her on so many tough roads.

“…to abandon the shoes that had brought you here / right at the water’s edge, not because you had given up / but because now, you would find a different way to tread, / and because, through it all, part of you could still walk on, / no matter how, over the waves,” read Whyte.

Learning to leave behind the old was a main part of Whyte’s guidance on how to gain new eyes. To leave a story that’s been good to you is a terrifying concept. But to be bold and courageous, to forge new paths of vulnerability, and not associate vulnerability with weakness is key.

Of the mostly older crowd, topics of marriage, children, and experience flowed throughout the conversation. Whyte joked that if we were to meet our younger selves and tell them of what lies ahead, the youth would all but live the remainder of their life in a padded room, for life is inevitably filled with heartbreak and losing almost all that we love. The sooner that we accept this reality, the more we can live our presents in dreamlike manners.

The most sincere, generous paths involve forklifts full of vulnerability and heartbreak. According to Whyte, if we close off for this fear, we become small and are not able to grow. Whyte’s words danced around the idea that we do not need to do anything to find the journey within ourselves. It is rather that our eyes become open to the journey that has been unfolding all along.

Whyte’s reading of an older poem of his “The Opening of Eyes” spoke of our own unique frontiers. The poem brought forth the image of Moses removing his shoes, only to observe that he was standing on holy ground the whole time. This reveals that we long for and commence on pilgrimages and journeys throughout our lives, only to discover we were standing on that transformative path all along, and that we did not need to go looking for it.

The real miracle of life, as discussed, was that we are something rather than nothing. We can lose our identities and names and gain new ones like pilgrim, only to find significance in all that we had taken for granted.

Whyte’s stories and poetry reading focused on provoking listeners and attacking minds in a way no other poet can match. Repeating stanzas as he saw fit to convey his ombre implications, with varied inflections and power behind each word, silence remained seated with the audience. His presence, witty and captivating, invited every audience member to romantically and unapologetically fall into a state of deep reflection.

The central idea of a pilgrim, moving their way forward in between things, passing through very quickly, speaks to the very plight of a college student. It seems we too are searching for a specific destination, but like the pilgrim, we need help, company, solitude, and silence to truly find what we are looking for.