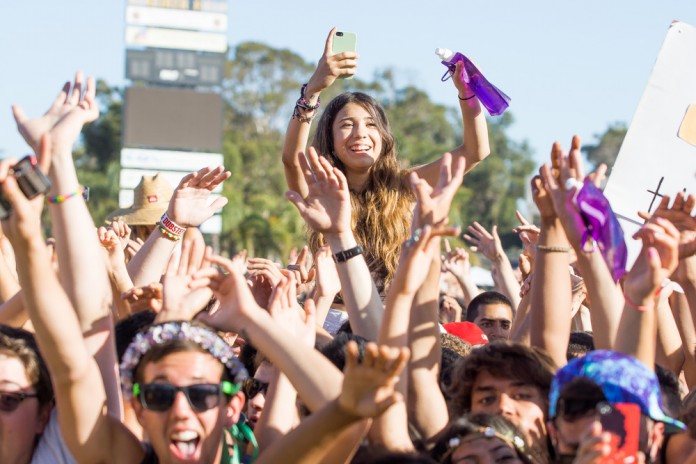 The University of California, Santa Barbara student population gathered in Harder Stadium for the 36th annual Extravaganza music festival held on Sunday, May 18, put on by Associated Students Program Board (ASPB). The 2014 line up consisted of artists Diplo, Local Natives, Chance the Rapper, and Jhené Aiko, along with local performers Yancellor Chang and T-Fresh.

A “carnevale” theme trickled through the air with the help of two jubilant dancers on stilts who towered over everyone, wearing metallic purple and gold carnevale costumes accessorized with gold hula-hoops.

The day began a little after 1 p.m., and students rushed in to first get water pouches, provided by Associated Students Program Board, and fill them up to stay hydrated for the day.

“I like what they did with the water situation” said second-year engineer major Ian Long. “It’s definitely better than last year.”

After getting hydrated, students ran to the stage to catch Battle of the DJs winner T-Fresh, who was first to get the crowd moving.

Next, Patrick Therrien (vocals), Brad Katz (guitar), Sam Goff (bass), and Gad Girling (drums) took the stage under the name Yancellor Chang. These Battle of the Bands winners, decked out in tie-dye shirts, shared their funky vibe and groovy tunes.

“Playing in front of everyone was a really good time,” said Girling. “It was a lot different because of the bigger stage and stuff, but we were still doing our usual thing–playing music.”

After Yancellor Chang hit the stage, DJ T-Fresh played another small set in transition to the next act, Jhené Aiko.

“I am most excited to see Jhené Aiko,” said third-year political science major Melanie Barajas, and the rest of the crowd’s excitement was palpable. The soulful Aiko featured a cover of the legendary Tupac and put on a great set just before Chance the Rapper.

Although he brought up the energy a bit more, Chance got very intimate with the crowd by getting off the stage multiple times and interacting with the audience.

“I like how active and involved he is” said second-year biology major Taylor Berry. “It shows that he really appreciates his listeners and creates good energy.”

Playing off of this good energy, popular indie rock band Local Natives proceeded to hit the stage and exude chill vibes into the crowd.

The day finished off with the most anticipated performance of the day. For the rest of the afternoon, DJ and producer Diplo’s skyrocketing energy and fat beats took over the audience as he proceeded to get the students jumping up and down, dancing, and even twerking on stage.

Although music was the main attraction, it wasn’t the only form of art brought to the festival.

The center of the stadium held a large tent of “Live Art,” which not only functioned as an art exhibit, but also had painters working on art pieces right then and there. Some of the artists even strayed away from their canvases and offered to paint cool designs and images on the faces and arms of festival attendees.

“I didn’t know many of the artists,” said first-year biology major Mayra Arrieta, “but it’s still really fun, especially being able hang out with friends and enjoy the atmosphere.”