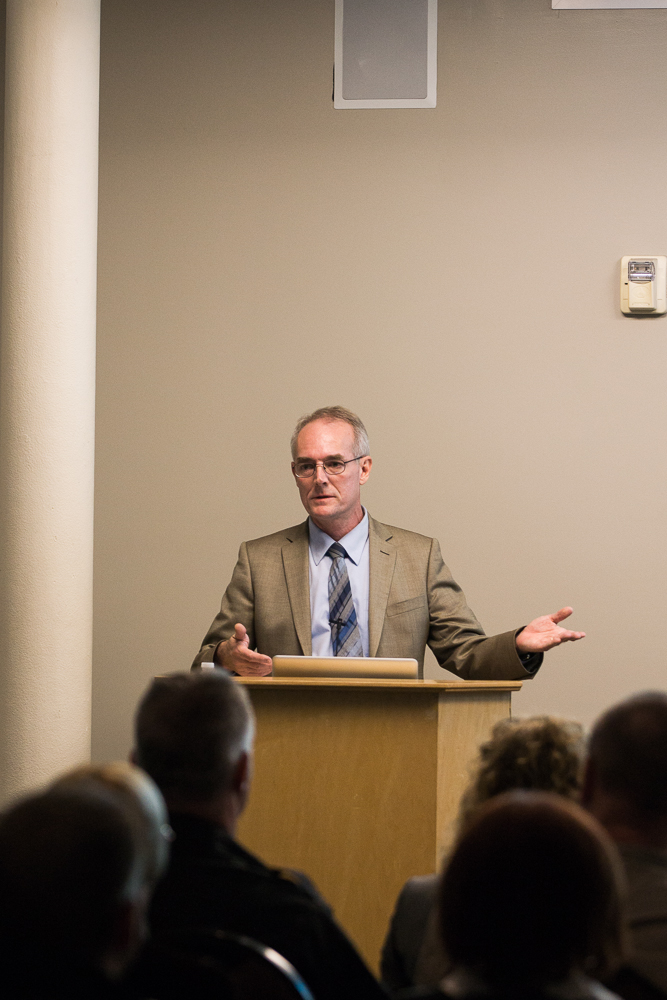 Charles Hoge, M.D., came to the Mosher Alumni House on Thursday, Nov. 21, to speak about Post Traumatic Stress Disorder in an attempt to educate the university community on its effects.

Hoge is a former colonel for the United States Army and worked at the Walter Reed Medical Center as an attending psychiatrist. He is very well known for his expertise on PTSD.

“We don’t have yet the knowledge to prevent PTSD,” Hoge said. Hoge’s lecture is included in the series “Say Something” by Counseling and Psychological Services (CAPS) on campus. The series aims to reduce the rate of student suicide.

Hoge spoke about the biological effects of PTSD on those who suffer from it. He talked about the fight or flight response with which every person is naturally equipped, and how when those affected by PTSD suffer flashbacks or nightmares, it is the “brain being unable to forget something you’d really rather forget. Its job is to make sure you never forget.”

“We, as a society, need to realize that anger is a feeling, not a threat,” Hoge said as he discussed the symptoms of PTSD. Many sufferers exude strong emotions, but not necessarily emotional actions.

Much of Hoge’s discussion revolved around PTSD suffered by veterans.

“I think the best thing if you’re interacting with veterans is be direct, honest, and make sure to follow through,” Hoge said.

He also talked about the misconception of PTSD being incredibly common in veterans. According to Hoge, on average only 10 to 15 percent of veterans suffer from PTSD, though he says “it is fair to say that everyone is affected by their deployment.”

He also made sure to discuss the implications of the government re-deploying soldiers who are known to suffer from PTSD.

He asserted that it is a difficult situation, since soldiers with PTSD are usually the soldiers who are going to be doing the best job.

Hoge discussed the importance of helping veterans transition back into a new normal routine once they have returned to civilian life.

“Sometimes the transition doesn’t happen until many years after they return,” Hoge said. “It’s no less immediate whenever it happens.”

Hoge emphasized that every soldier’s experience and recovery is different, and that there is no “one size fits all” for the healing process.

“There is no switch, but you can learn to dial them up or down,” Hoge said.

The most important thing, Hoge said, is to be able to listen to the person who is going through the process of recovering from PTSD, since they are the person who knows best what they need.

“I’m a big fan of the Vet Centers because many of them are staffed with combat veterans,” Hoge said. “There’s always somebody out there who will be willing to help.”

There are many options out there for veterans who are looking to get past their PTSD. Talk therapy, medications, sleep regulation, and coordinating mental and physical care are just some of the things Hoge mentioned.

“I think there needs to be more veteran 12-step programs,” he said.

He also told the audience to make sure they did not take any reaction from the sufferer too personally, because PTSD is a very personal struggle and often has very little to do with the surrounding people. Although many veterans suffering PTSD face difficulty in overcoming it, Hoge made sure to address the value of these veterans.

“Veterans have many outstanding skills that they bring to the university and workplace,” he said.