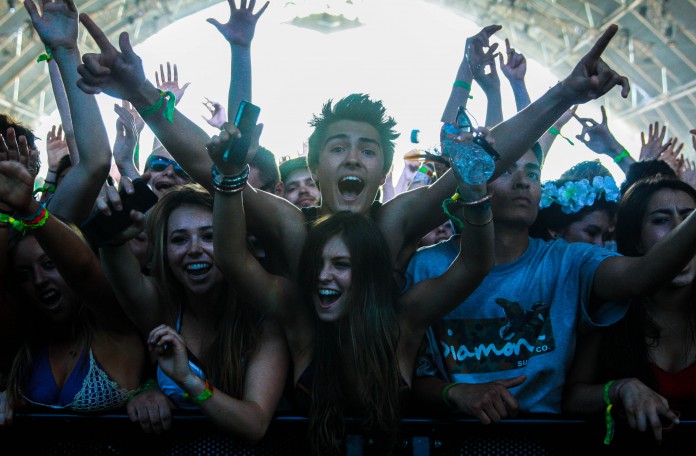 There’s a certain sense of twisted ownership that comes with not showering for an extended weekend in a notoriously hot desert climate, and knowing that you have enough dirt and grime caked on you to qualify as a fourth layer of skin. I think that every girl who I’m camping with has used the on-site showers at least once, and I’m the fetid outlier of the group. I’m the Pigpen of this Peanut Gallery; I’m Bassnectar’s Friday set incarnate.

Now, please don’t think that I have terrible hygiene—on the contrary, I usually don’t like being dirty and sweaty longer than is absolutely necessary. But I just can’t bring myself to drop $10 per shower while I’m here, especially since I don’t even pay that much for my water bill that provides me with showers for a whole month. It’s one of those expenditures that accompanies the festival experience, and I don’t blame anyone for wanting to take advantage of it. But dropping money on a shower, as well as anything else (on-site food and snacks, souvenirs, lockers to store your belongings, etc.), adds up. That being said, I encourage anyone trying to save some money to join the club of non-showering, baby-wipe-loving festivalgoers such as myself. There’s also the incentive of knowing that the shower you finally take, after (in my case) four days will undoubtedly be the best shower of your life. So embrace the grunge, and take comfort in the fact that it’s the product of way more fun and insanity than you’d have sitting at home, clean, on your couch. But, I digress.

Day two was, hands down, better than day one for me. The primary reason was not the music per se, but simply being around friends. A lack of knowledge about the festival layout and dying phones prevented me from meeting up with my friends on Friday, and I ended up on my own for the entirety of the day. Although I met new and interesting people, I still felt a sense of loneliness that cast a slight shadow over day one’s music and events. So I made it a point to ensure that recent history didn’t repeat itself, and was able to hang out with people for almost every concert I attended. It’s definitely possible to enjoy music by yourself, but there is also much to be said about the company of friends and being able to bask in the music with them.

I started day two off by seeing the beginning of Dropkick Murphys’ set, which was at the Coachella stage. The seven-piece band that hails from Boston, Mass., originated in 1996 and can be classified as punk rock infused with a Celtic flavor. Their music gave the audience not a taste, but a punch of Irish flair with songs, such as a cover of “Johnny I Hardly Knew Ya,” that could have easily been sung over late-night pints at a pub in Dublin. In a pre-show interview, bassist Ken Casey described the band’s music as having “blue collar themes that the average person can relate to.”

“Musically, we’ve grown in the sense that we’ve grown into seven [members] from four,” Casey added, “but we’ve always had a Celtic influence off the bat…It’s the themes and the topics that we write about that get the core fans to still say, ‘This is my band.’”

Straying away from music that paid homage to cultural tradition and history, I ventured over to Mojave tent next to meet up with my friends for the 2 Chainz concert. After a delayed start, the southern rapper and nominee for the 2013 Grammy award for Best Rap Album (Based on a T.R.U. Story) took the stage—wearing two chains, for those of you who were wondering—and kicked off his set with “Mercy,” a song he is featured on alongside Kanye West, Pusha T, and Big Sean. He followed up with Nicki Minaj’s “Beez In the Trap,” which I suppose is congruent with his penchant for the letter ‘z’ instead of ‘s.’ Other songs included his radio hit collaboration with Drake, “No Lie,” “Birthday Song,” and “I Luv Dem Strippers,” which covered profound and complex subjects such as big booty hoes, diamonds, and convertibles. I personally was blown away by the esoteric nature of his lyrics, which were accompanied by a synth player, guitarist, and drummer in the background.

The Sahara tent was our destination once we escaped the massive 2 Chainz crowd, and I spent the next hour near the front of the audience who came to see the Dutch techno and dance duo Bingo Players, which is made up by Paul Bäumer and Maarten Hoogstraten. Like many of the artists I’ve seen this weekend, I had no idea who they were, but their high energy set was a nice change of pace to counteract the 5 p.m. crash that many of us were starting to feel. I don’t know if fist pumping can count as an arm workout, but I did it enough times during Bingo Players’ set that I think it suffices. Although I wouldn’t describe their music as anything terribly revolutionary, it catalyzed the high-energy vibes that radiated throughout the Sahara tent that I’m sure they hoped to achieve. Also, a girl flashed the entire crowd when she was projected onto the jumbo screen, which I’d say is a valid attestation to the effects of their music and stage presence on the people.

My plan to was to catch Portugal. the Man after Bingo Players, but a hiccup in my schedule caused me to miss it. That is something I regret, given that I started listening to them recently and I was looking forward to seeing how their liveshow compared to their recordings. I did get to see Grizzly Bear at the Mojave tent, though, and noted how the glow of the lanterns that they lit onstage mirrored the orange luminescence of the sunset, which faded into a deep purple. The music had a glow of its own, as well. Sustained harmonies characterized songs such as “Sleeping Ute” and “Knife,” reminiscent of a glass harmonica. I hesitantly left as the band started playing “Two Weeks” so that I could get back to Coachella stage in time for The Postal Service, which was on my list of DO NOT MISS artists. Check back soon for my thoughts on the end of day two, which consisted of The Postal Service, The xx, Phoenix, and even a surprise appearance by R. Kelly.

Edit: Only after I came home from Coachella did I find out that, apparently, there were free on-site showers that I was not aware of. That being said, I would like to issue a public apology to everyone who had to sleep next to me, let alone stand next to me.