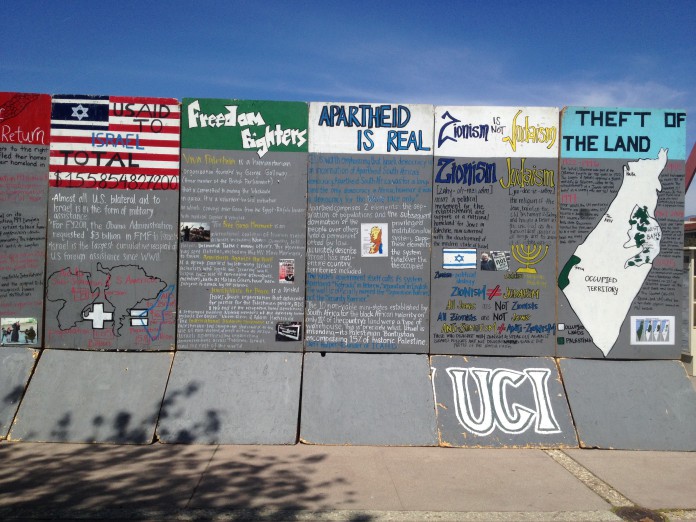 The “A Resolution to Divest From Countries That Profit From Apartheid” recently introduced to Associated Students Senate inspired plenty of controversy; however, more importantly, it inspired student discussion of a number of important social and political issues.

“Though the resolution did not pass, it started a dialogue between students on all sides of the issue. This needed to happen and I look forward to any upcoming resolutions that hope to pick up where this resolution left off,” said Senator Tyler Washington, a second-year communication and film & media studies double major. “I’m just really amazed and appreciative of all the students that actually came to our Senate meetings and toughed it out all until the end.”

The major source of the controversy lies in the fact that the intent is to cut UCSB holdings in “Caterpillar, General Electric, Northrop Grumman, Hewlett Packard, and Raytheon, whose military technology is used by the Israeli Defense Forces,” according to the text of the act. The resolution earned support from over 25 campus organizations, including Students for Justice in Palestine (SJP), Jewish Voice for Peace, Queer Student Union, United Students Against Sweatshops, Human Rights Board, Unión Salvadoreña de Estudiantes Universitarios (the Salvadoran Student Union at UCSB), and the Pacific Asian Coalition.

Senators heard over 24 hours of public forum total, between the two meetings, with the second meeting immediately preceding the vote. It lasted through the night, even with time limited to five minutes a speaker in addition to a final 10 minutes for both sides to present final arguments. Students were so passionate about sharing their ideas on the act that both senate meetings where speakers were heard were forced to move from the usual meeting room in the University Center to the larger Corwin Pavilion.

The public speakers, which included students, community members, and representatives from neighboring campus University of California, Irvine (which recently passed a similar divestment bill by unanimous vote), spoke with incredible passion, arguing about the intent of the bill and the appropriateness of the language. Both those opposed to and in favor of the resolution were entirely committed to their cause, braving long hours to speak, sometimes angrily, sometimes tearfully, about their feelings on the issue.

While the language of the bill does not call for divestment from Israel but from companies that profit from Israeli military conflicts, many felt that the resolution still discriminated against the Jewish and Israeli community. “To single out Israel, if you can’t understand how that would make a Jewish student feel marginalized, I’m flabbergasted,” said Rabbi Evan Goodman of the Santa Barbara Hillel.

Jonathan Rothschild, a second-year mechanical engineering major and one of those who spoke against the resolution during the meeting, said, “I don’t support Israel blindly, but I support Israel. [The resolution] singles out Israel separately, it doesn’t go into some of these other countries that commit human rights violations.”

Proponents of the bill maintained that the bill was not asking Senate to take a position in the Israel/Palestine conflict. “We’re asking you to remove yourself from a side that was chosen for you,” said Bradley Forrest in the Senate meeting, comparing the resolution to the recent Senate decision to divest from the fossil fuel industry.

Other supporters addressed it as a human rights concern or expressed a desire for UC funds to be divested from any military conflicts. “This is not a religious conflict, this is a conflict between the colonizers and the colonized,” said Abuata during the meeting. “Our purpose here is to divest in corporations which we know are acting wrongfully.”

Not only was there a moral and cultural basis to the opposition, but students also expressed concern over the potential economic impact of divestment. “If you all divest, finances for our research departments will be hindered,” said Chair of Finance Board Raul Martinez.

The vote was finally moved to secret ballot after a motion introduced by Senator Taryn Sanders early morning on Thursday, April 11. Of the motivation behind this decision, Sanders said, “Some people chose intimidating forms of coercion and fear tactics to try to sway our decision. I felt that not only was my personal and mental well-being being jeopardized, but my individual safety as well.” Sanders also released a statement regarding the motivation behind her motion, which is available in its entirety on The Bottom Line’s website.

Senator Navi Kaur, global studies major and feminist studies minor, also expressed concern about the difficulty in creating a safe space for discussion of the resolution. “Senate the past two meetings has been a very unsafe space. Students of color, queer students, and women were not safe,” said Kaur. “Safety should have been the number one priority.”

Despite all, students on both sides of the argument expressed similar sentiments regarding the positives of the experience. “I feel the resolution created a space for critical dialogue and brought various campus communities together…I think this coalition that SJP has created is beautiful. How often do we see this many students come together for a common cause?” Kaur said.

From the opposite side, Rothschild said of working with students against divestment, “Over these past few weeks I have felt more scared, more alone, more uncomfortable being who I am and having my own views and having my own views at this school than ever before. At the same time, I’ve felt so much love and so much passion and dedication. I’m proud to call these people my family.”

Introduced as an alternate to the original divestment resolution was the “Resolution to Invest in Companies Working Toward a Two State Solution,” which calls for, “strengthening the prospect of a two state solution between Israelis and Palestinians.” It also further resolves that “the University and students work to implement further education on this topic on campus.”