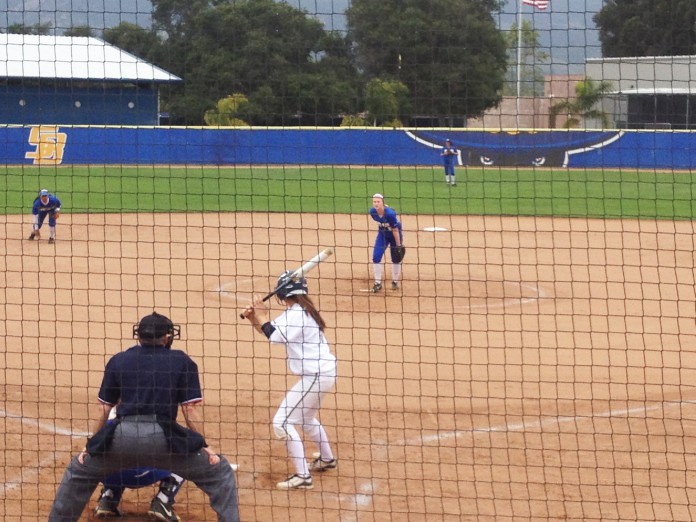 On Sunday, April 14, The University of California, Santa Barbara softball team went head to head against the University of California, Davis. The rubber match game of the three game series favored the Gauchos as they were able to edge out a victory in a close game, 1-0. The win was built upon a gutsy performance by starting pitcher and first-year Alex Pingree, who completed the game with a shutout over the Aggies. The Lady Gauchos are now 25-16 overall and 6-5 in the Big West Conference, which has solidified themselves in fourth place in the Big West Conference with still plenty of season left to go.

The three game series was a pitching showcase as each of the three games came in the form of a shutout; first with the Aggies victory of 8-0 over the Gauchos and then two back to back 1-0 victories for the Gauchos over the Aggies. Sunday’s victory was produced largely from a collaboration of Pingree’s pitching gem, the Gauchos quick and prowling defense, and the monster solo home run smashed by second-year outfielder Shelby Wisdom.

Pingree went the distance by pitching in all seven innings. She gave up five hits, one walk, had three strike-outs, and didn’t give up a run. The most impressive part of this first-year’s performance was how cool and calm she was when in a jam. She pitched herself out of trouble in the fourth inning by getting a huge strike out and a line out with runners on both third and second. She also pitched herself out of another jam in the sixth inning when she walked a batter and had a throwing error, but still managed to keep the runners from second and first from scoring.

“I feel like today after facing them yesterdayI just needed to focus on really hitting my spots consistently and making sure that my off-speed and my changeup was working. And then whenever I got into a tight situation my defense was there, so that’s always really good,” said Pingree “Anytime I doubted anything, they like had everything, even after my error they came in and cooled me down. So they were there mentally and physically.”

The Gauchos offense was patient as they were able to draw four walks, but the hits were far and inbetween. The Gauchos were held to only two hits from the Aggies starting pitcher and second-year Justine Vela, but one of those hits was the towering solo homerun from Shelby Wisdom that soared over the left field wall and bounced off the baseball team’s locker room. That was the sixth homerun on the year for Wisdom, the thirty third RBI (a team high), and it bumped her batting average to .299 for the season.

“Shelby’s homerun came at the perfect time because we were kind of at a low offensively and we needed one thing to pick us up and she definitely did that. It was great. It was good to watch and it was a bomb,” said Pinegree

The Gauchos have a tough stretch in front of them. Their next game will be Wednesday, April 17, at California Polytechnic State University. Then, a three game series against second place team in the Big West at the California State University, Long Beach.

“I think winning this series is going to help a lot because we are kind of hitting are stride and have momentum at the right time. I feel like we are all meshing together really well, so I expect to the win the series from here on out with this team,” said Pingree.

The next home game for the Gauchos will be on Saturday, April 27, at noon against California State University, Northridge.