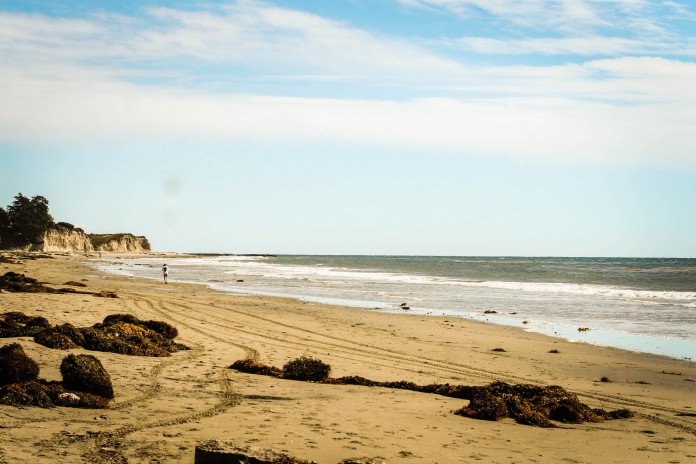 Santa Barbara County Sheriff’s Department is looking into the death of an unidentified college-aged man whose body was found on the beach near the 6500 block of Del Playa Drive early this morning.

The body was discovered today at 8:42 a.m. at the foot of Isla Vista’s cliffs, and a coroner’s office report found head and facial injuries consistent with a fall.

A Sheriff’s Department spokesman explained that the body belonged to a white man in his mid-20s, with short, shaggy brown curly hair and brown eyes. The man stood approximately 5 feet 10 inches tall and weighed about 190 pounds, and he was clean shaven. Authorities did not specify whether the deceased was a student at the University of California Santa Barbara.

According to reporter Beth Farnsworth of Santa Barbara’s KEYT News, who was reporting from the scene early Friday morning, the man appeared to have a stocky build and was wearing nothing but a pair of green boxer shorts. The body was wrapped in kelp at the time of its discovery.

The unidentified man marks the fourth person reported to have fallen off of Isla Vista’s cliffs since late August, 2012, despite the presence of protective 3-foot-high fences that were put up along the bluffs following several 2001 deaths. Friday’s fall was the only reported fatal incident in the past three months.

Sheriff’s Department investigators removed the body to the county coroner’s office beginning at approximately 10 a.m., and hopes are high that further investigation will shed light upon the man’s enigmatic death. Personnel from the the Coroner’s Bureau and the Forensics Bureau, as well as detectives, are working diligently to identify the deceased.

Anyone with information regarding the identity or circumstances of the fall victim is encouraged to contact the Sheriff’s Office Criminal Investigation Division at (805) 683-2724.