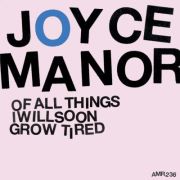 Last year, punk pop band Joyce Manor wooed both audiences and critics alike when they debuted their first self-titled LP to much acclaim. Punknews.org named Joyce Manor’s debut effort the “Best Punk Record of the Year,” while Alternative Press listed it on their “10 Essential Albums of 2011.” With their signature mix of hardcore and pop punk combined with catchy riffs and choruses, Joyce Manor has quickly become the apple of the LA punk scene’s eye.

With such acclaim comes added pressure for any band, yet Joyce Manor performs admirably on their sophomore effort, “Of All Things I Will Soon Grow Tired.” Despite expectations that the band would use the same formula as their first album to create their next one, the band altered their style as they saw fit. The result is impressive, to say the least.

In “Of All Things I Will Soon Grow Tired,” Joyce Manor continues their pop punk and hardcore motifs, which are scattered throughout the album, while bringing their melodies to the foreground.

Much of the hardcore influence that riddled their first album has been dialed down significantly, but it is still present in smaller dosages. With its fast tempo and angular guitar riff, “If I Needed You There”, appears to be the only song that can be clearly labeled as hardcore.

The album’s first two tracks, “These Kinds of Ice Skates” and “Comfortable Clothes,” seem like vestigial remnants of the old Joyce Manor, as they incorporate discordant breakdowns and poppy choruses that are a call back to the hardcore style of their first album.

Joyce Manor also relies on new influences to compensate for their lack of hardcore sounds. Songs “Bride of Usher” and “See How Tame I Can Be” sound like the poppy melodies of the New Wave bands of the 80s, as the trashy guitar riffs and aggressive drums take a back seat.

Without a doubt, the most notable track on the album is a cover of “Video Killed the Radio Star,” which is carried out in perfect punk rock execution. It may sound like crap on paper, but it’s awesome in practice.

Adding to the album’s variety, tracks “Drainage” and “I’m So Tired” take the minimalist route, with lo-fi acoustics that are reminiscent of Fugazi’s “So Tired.”

My only complaint about the album is that it is only about as long as a Pink Floyd jam sesh, clocking in at just over 13 minutes. Though brevity is a Joyce Manor trademark, in this case it doesn’t work in their favor, leaving the listener wanting more just as the album reaches its peak.

Despite these gripes, I’m pleased to say Joyce Manor has done it again; they’ve created a good album while successfully mixing together the varied influences of artists they love, putting many anticipatory doubts to rest.