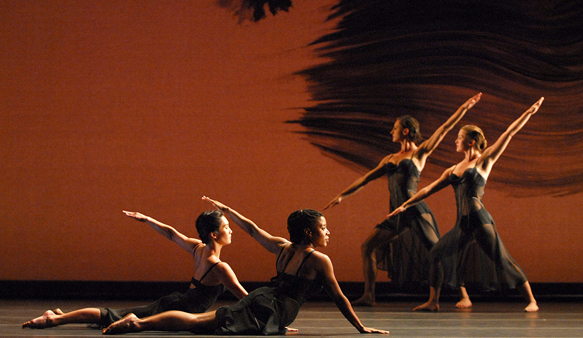 The maniacally-musical work of the Mark Morris Dance Group, along with the appearance of the infamously candid choreographer himself, inspired some lively debate among the Santa Barbara audience in attendance at the company’s April 26 performance at the Granada Theater.

The Santa Barbara program featured classical works by Bartok, Hummel and Schumann performed live. The musicians’ presence allowed the dancers to build an even more intimate connection with the music. The program was defined by touches of humor, varied use of space and notable repetition.

While the dance program itself was certainly memorable, the show seemed to continue after the scheduled performance when the opinionated Mark Morris came onstage to answer audience questions.

Nonchalantly sipping from a glass of wine, Morris brusquely handled the public’s inquiries with an impervious demeanor. His saucy quips, peppered with expletives, inspired both rolls of laughter and groans of chagrin from those who stayed to hear him speak. He discussed his choreographic process, his experience working in Europe, and his controversial dance aesthetic, finishing off with some memorably unprintable advice for the UCSB Senior Dance Company.

Having spent a number of years working in Europe, Morris noted the differences between European and American culture, or lack thereof. European society has traditionally treasured the arts and provided them with generous state funding, allowing for innovative choreographic experiments to flourish. But in America, dance is often viewed as “a phase you are going through,” according to Morris. Yet Morris remained philosophical about this, noting that concert dance, never as popular in America as in Europe, “can be for anybody but it’s not necessarily for everybody.”

Morris’s company, which he founded in 1980, has been a major global influence on modern dance for decades. His choreography is in high demand, and his work is invariably mentioned in all dance appreciation and modern dance history university courses. And, of course, Mark Morris’s inimitable personality itself is almost as legendary as his choreography.

“I pick a piece of music I really like, listen to it hundreds of times and that’s kind of it,” said Morris while responding to questions about his choreographing process. “I just make the damn thing up.”

What really distinguishes Morris’ work is his intense focus on manifesting the music through movement. Choreographers tend to differ in their views on the desirability of a relationship between the two. While Morris neatly synchronizes dancers’ movement with the music, others prefer to juxtapose the two, or to allow a sort of ongoing dialogue between the two.

Though the dance community is divided in its response to Morris’ choreographic aesthetic, his in-depth understanding and appreciation of music usually goes without question. Morris’ intense musicality helps the audience navigate the intricate nuances of his chosen scores with ease.

“Dancers are much harsher on me and my aesthetic than musicians…dancers are like, ‘how dare you dance to the rhythm or the text or phrase it according to the musical phrase?’” said Morris, openly acknowledging different perspectives on his work. “And it’s like, well, I like that.”