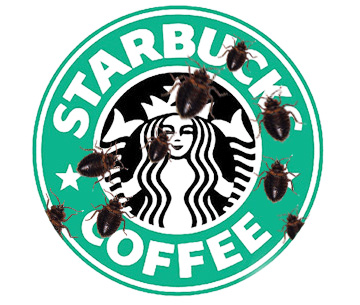 Okay, so how many of you are addicted to Starbucks and go like every day? Or how about once a week? Or a few times? Anyway, if your regular favorite Frappuccino drink is the deliciously blended Strawberries and Crème, I have some bad news for you. Hopefully, I don’t turn you off from the drink altogether.

Ever wonder how in ancient times the British dyed their coats red, people were able to color and mark their skin with shades of maroon or how the European robes were purple? Well, this was all possible from these little bugs that grow on a cactus, a cochineal bug. It is a very small white bug that when smeared across a surface gives off a deep reddish color, sometimes bright fuchsia. Now, do I dare even ask you how you think the Strawberries and Crème drink is made into a swirly pinkish color? Sadly, it’s not entirely from the strawberry flavoring, which may also have the cochineal bugs in it, who knows? But the fact of the matter is, yes, you are drinking bugs. Gross, right? I know- I used to drink those Strawberry Frappes all the time.

Now calm down, Starbucks is not using anything dangerous or poisonous in their drinks. These little bugs are harmless, although they do anger some people. I personally love Starbucks and would go every single day if it weren’t so damn expensive. And it wouldn’t hurt to have one on campus, you know? Like right next to the Jamba Juice? Anyway, that’s a whole other issue. So to reiterate, I love Starbucks and am a proud owner of their Starbucks Gold card. Yay! Although, there are (shockingly) some people who do not like Starbucks and are entirely grossed out by their use of bugs. First-year philosophy major Sarah Rose has some strong opinions against Starbucks, even before she heard about the bugs.

“I think Starbucks is the evil empire,” Rose said. “They run the smaller coffee shops out of business on purpose. And the bug thing is disgusting; it’s really gross that they’re using bugs.”

Needless to say, she won’t be trying any free samples of their Strawberries and Crème Frappes, but this isn’t the first use of the carmine extract from the cochineal bugs. Carmine is frequently used to naturally dye foods and cosmetics. Hey, maybe they even used the bug juice to color the pink icing on the “birthday” cake pops. I still haven’t gotten around to trying one of those, but I’m sure not going to crave one anytime soon.

Are you bugged about Starbucks’ use of the insect-based food coloring? So were about 6,500 other Starbucks customers. In July 2012, Starbucks will no longer be using the cochineal extract in their treats anymore, at least in the United States. This brings a cheery tune to just about anybody, even the ever-so-opposed Sarah Rose.

“Good. They shouldn’t use bugs or anything without even telling them first,” Rose said. “On the other hand, they do have very good health insurance for their employees.”

I wonder if this coverage was brought about by the use of the bugs… No, probably not. The bugs don’t harm anyone or make anybody sick, except for the vegans and vegetarians. They aren’t too happy about gulping down bug after bug while they (used to) enjoy their Strawberry Frappe next to the beach.

“Using bugs in their drinks is not at all appetizing and I am not going to drink any of those products,” third-year environmental studies major Vanessa Sanders said. “I’ve been vegetarian for three and a half years and am very disappointed that they think it’s okay to serve that to people.”

Now, if you are completely opposed to the idea of drinking bugs but you are obsessed with the Strawberries and Crème Frappe, just wait it out for about two more months. The bugs will all be gone by July. Hopefully those aren’t what gave the drink its flavor, right? Maybe those were the “seeds” that would sometimes get stuck in your teeth.