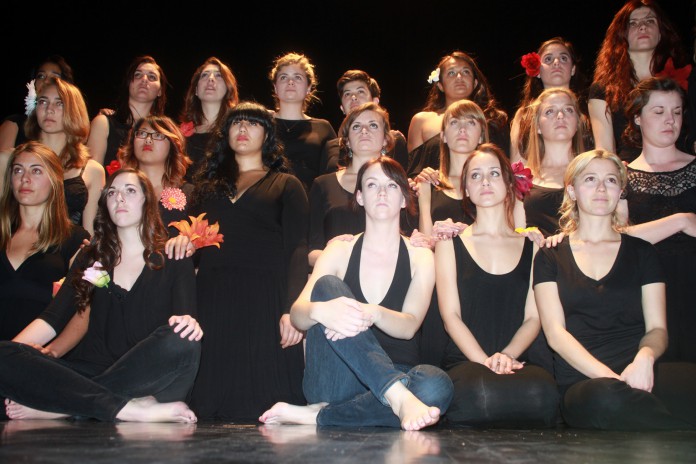 The word monologue can sometimes be misleading because it’s typically associated with individualism and isolation, but as Eve Enselers’ award winning play “The Vagina Monologues” demonstrates, monologues can be used effectively to unify a community, as well as create an alliance between people in over 140 countries. “The Vagina Monologues” is a series of solo and group monologue performances by women that address a variety of women’s social issues such as rape, pregnancy, female genital mutilation, menstruation and much more.

University of California Santa Barbara’s Women’s Ensemble Theater Troupe is presenting their 14th annual production of “The Vagina Monologues” at Campbell Hall this coming weekend. This year’s president of WETT is fourth-year environmental studies major, Marjan Riazi. The message of “The Vagina Monologues” really resonated with Riazi, who said she was more than thrilled to be involved in such an inspirational show.

“I am happy and proud to be a woman, and I love that this show gives me the opportunity to address women’s issues and to help unite my community,” said Riazi.

According to WETT’s website, the purpose of the performance is to raise awareness and advocate the education of contemporary women’s issues through the medium of the arts. Aiding the development of strong and influential women is something WETT is devoted to. WETT Vice President Sarah Sloat, a fourth-year global studies major, would agree that the play not only helps motivate women to be powerful and confident, but also provides an open and creative space to discuss important topics in female communities that often go unspoken.

“One of the major objectives of this show is to dispel any sort of taboo that surrounds the word vagina and make it so we can talk about these issues,” said Sloat.

Both Riazi and Sloat want to emphasize that the show is not just for women. If given the chance, it can be an amazing experience for people of any gender.

As I saw the show last year and sat in on this year’s dress rehearsal, I feel I can say that “The Vagina Monologues” is a remarkable show that’s able to go beyond being solely a performance to being a collective voice of strength for women all over the world. I wouldn’t miss this mind, body, and soul-stimulating experience.

“The show is not just for women, it’s defiantly a show for all adult audiences, come with an open mind, chances are you will learn something new,” said Riazi.