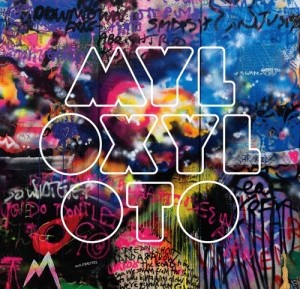 The opening notes of Coldplay’s 2000 single “Yellow” will forever remind me of my first kiss, which took place during the summer after my freshman year of high school. As anticlimactic and awkward the kiss itself was, the song was anything but; this feeling translates to literally every song the band has produced since their genesis in 1996.

Fans and critics alike praise Coldplay for their opulent melodies, lead singer Chris Martin’s distinctive vocals and provoking lyrics, and the band’s desire to continuously develop their sound while still perpetuating the distinguishable musical qualities that their fans crave.

Their latest album, “Mylo Xyloto,” does exactly that. While expanding their repertoire to feature more electronic and synthetic elements, as well as outside voices, the group still puts forth a sound that is all their own, and they don’t disappoint.

I want to dispel any accusations upfront that may criticize Coldplay for “going mainstream” or trying to conform to what is considered popular, by emphasizing their transition to more synthesizer/electronic-heavy songs on “Mylo Xyloto.” We’re not on the level that Kanye West went to on his “808s & Heartbreak” album, people. For one thing, as far as I’m concerned, Chris Martin didn’t go anywhere near Auto Tuning software (not that he remotely needs it).

While the technological components of the songs do have a stronger presence in “Mylo Xyloto,” Martin’s voice and lead guitarist Jonny Buckland’s catchy riffs still wear the pants in this sonic relationship. Evidence of this is the album’s lead single, “Every Teardrop is a Waterfall,” which was released June 3. This upbeat, colorful song acts as an anthem for the band; it weans the listener onto the album’s additional electronic sounds, while satisfying their cravings for all things Coldplay, with lyrics like “I’d rather be a comma than a full stop,” notable guitar interludes, and drum beats that both complement the melodies and take the reins at respective moments. The song acts as a multi-hued metaphor, taking the audience on a vivid trip that encourages a listener to “turn the music up” and makes their “heart start beating” just a little bit faster.

Another example that Coldplay hasn’t abandoned their roots Turn up “Major Minus,” which keeps it old school and reminds listeners that Coldplay can work with a plethora of musical content as well as the bare bones. The guitar-only exposition evokes a sense of antiquity throughout the entire song, void of any sound artificially formulated by the click of a mouse. Those cynically expecting synth-like parts to come in at any moment will be pleasantly surprised, because the only other elements to the song are the ephemeral “ooh, oohs” sung by Martin that layer on top of his crooning voice and a steady bass drum beat. Less does appear to be more in this case–though this is not the be-all-end-all for this album.

The curveball that “Mylo Xyloto” throws comes in the form of songs such as “Princess of China,” which is a double-whammy of unknown sonic elements for die-hard Coldplay fans. Not only is there a prominent amount of synthesizers that are relentless until the culmination of the song, pop songstress Rihanna also makes a guest appearance.

Truth be told, I was skeptical when I first realized this. I’m not exactly the biggest Rihanna fan, and any chance that an outside vocalist might steal the thunder from Martin raised a red flag in my book. But astonishingly (if not a bit begrudgingly), I was both impressed with how Martin and Rihanna harmonized together and relieved that she didn’t steal his limelight. One of my biggest musical pet peeves is when the ‘featured’ artist sings more than the actual artist does, and/or is the first person to sing in the song. Such was not the case in “Princess of China;” rather, Rihanna lent a sultry vocal touch to the song, giving it a femininity that was appropriate given the song’s title.

I give props to Coldplay for successfully diversifying their listening demographic without compromising their core sound in “Princess;” the song probably garnered them a respectable amount of new fans from Rihanna’s fan base but doesn’t turn off a notable amount of ‘traditionalist’ fans. Others may disagree, but I believe that “Princess” was a fair balance of old and new, as is the album in its entirety.

Besides the aforementioned songs, other noteworthy tunes on the 14-track album include “Paradise,” “Hurts Like Heaven” and “Charlie Brown.” However, since the album is a concept album, I’d recommend listening to all of the songs together for the complete experience.

Coldplay seems to be comfortably easing into a new era of sound with this fantastic concept album. Although the criticized “Mylo Xyloto” is the most drastic departure from the band’s strictly alternative rock origin, I am inclined to argue that their metamorphosis is not something to be condemned, but rather embraced.