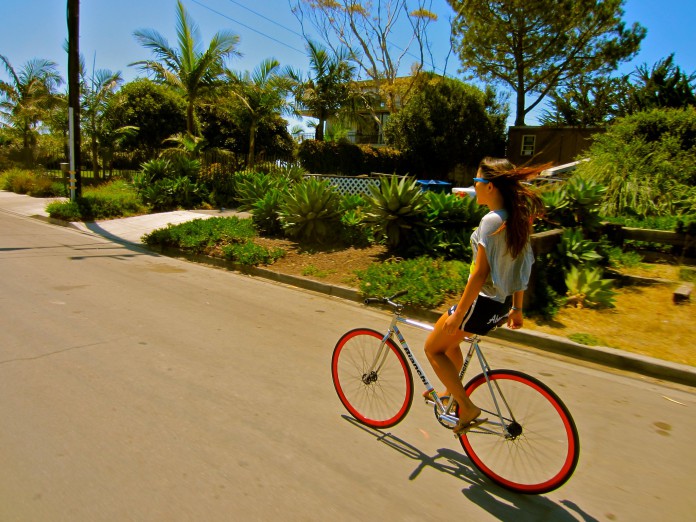 While certain posted signs make some of these laws clear to students, there are a number of regulations students could be fined for that are lesser known by the student body. The laws of the bike paths bear a surprising amount of parallels to the rules of vehicles on the road.

According to the University of California Santa Barbara Police Department, students can be cited for speeding, although the biker is expected to gauge what a safe speed is for the current conditions and traffic. Bikers are prohibited from riding too fast or slow to impede on the safe flow of traffic. They must also stay to the right side of the lane, ride single-file at all times, and signal when turning. Telephones and two earphones as headsets are prohibited unless the biker is equipped with a hands-free device.

UCPD’s Bicycle Safety Officer Matt Stern emphasized that bicyclists in the area are often cited for failing to obey motor laws while on the road.

“It is a misconception that bicyclists always have the right-of-way. If a bicyclist fails to stop at a stop sign and they are hit by a vehicle then the bicyclist may be found at fault and liable for vehicle damage and medical bills,” said Stern.

Officers and anyone with authorization by the Chief of Police reserves the right to impound parked bicycles that impede traffic on any walkway or street, block the entrance or exit to any university building, appear to be abandoned, or reported to be stolen. A widely-known regulation is the ban of biking on campus walkways.

“On the UCSB campus we try to keep bicyclists, skateboards and pedestrians separate,” said Stern. “Doing so reduces the likelihood of interactions, which can cause an accident with injury. Among our campus pedestrians are about 1,000 community members with hearing/vision impairments who also rely on the safety of our walkways.”

Though students may find biking through walkways more convenient, they should expect the possibility of a ticket.

“I was taking a quick shortcut through the UCEN [walkway] and the cops were there waiting to give a citation,” said second-year environmental studies major Gabiel Banbiu. Banbiu’s $100 fine was eliminated after he completed a one hour safety course.

“The purpose of the class is to give our community an opportunity to learn laws and important safety information without having to penalize them financially,” said Stern.

While the course allows cited students to forgo the fee entirely, it is only offered to those who receive their citations from UCPD. Thus, students cited in Isla Vista are liable for the total amount of their ticket.

Possibly the most expensive bike citation would be biking under the influence of drugs and alcohol. According to Stern, an arrest, mandatory court appearance, fine of approximately $800 and potential counseling or participation in an awareness program may all be issued.