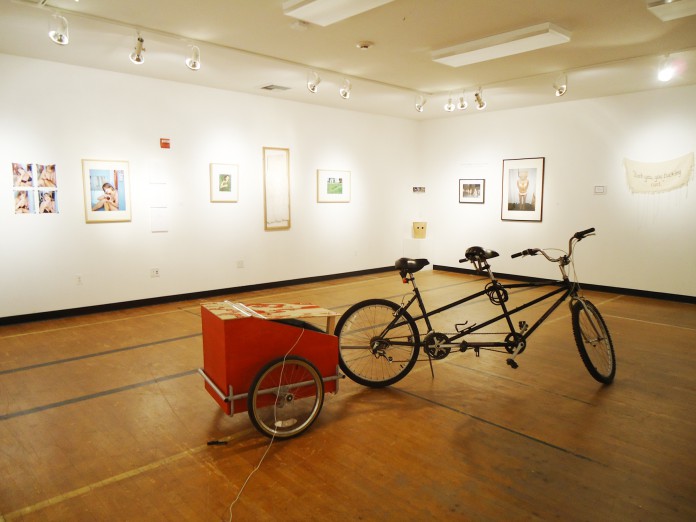 University of California Santa Barbara fourth-year art major Kiki Niebuhr presents a balance of hard and soft in her exhibit “Pretty Fluffy Squishy Hard: Neo-Feminism Through Sensuality,” where she aims to reconcile two conflicting aspects of female nature: a need to be strong and independent in a modern world, and a simultaneous need to maintain the traditionally valued aspects of femininity. Her exhibit ran in the Old Gym Gallery, Building 479, from Nov. 1 through Nov. 5.

Through her paintings, sculptures and performance art, Niebuhr explores femininity in both a metaphorical and literal sense, questioning these preconceived notions and behaviors, and the good and bad ways women interact with each other.

Her art certainly can have a resonance with other UCSB students considering feminist issues.
“I don’t like the thing in my culture,” said Jessica Rangel, a biology major, “how it’s all about finding a man and getting married and having kids.”

Niebuhr’s works vary in medium and purpose. Many are designed around subtlety, requiring the viewer to consider the meaning of not only the piece itself, but the objects used to create the art. Wood canvases and sculptures used by Niebuhr are expected to invoke the idea of hard versus soft, a common theme that connects the entirety of the exhibit. The wood itself is strong and tough, while the lines and knots in the grain are flowing and graceful, highlighted in Niebuhr’s work by paint and color to draw attention to this movement and natural balance.

The most haunting and disturbing piece is a filmed version of one of Niebuhr’s performance–based experiments. In the short film, which is composed of a series of brief clips, Niebuhr, dons a bra and thong, with blood spread along her thighs, shoulders, and neck, and walks around UCSB and Isla Vista. She repeatedly collapses in despair on the sidewalk and against cars, looking distraught and helpless. Niebuhr’s goal was to test human reactions, such as indifference, concern, or assistance, among other possible reactions, to her “rape victim” status.

The controversial piece, entitled “Face Down,” caused an uproar when some of the students and community members that approached Niebuhr believing she was a victim of rape or abuse discovered it to be an act.

“I did hear about this from a student who felt that it went too far,” said Leila Rupp, a professor from the Department of Feminist Studies. “Rape is a very serious and emotionally laden matter, and I do think that pretending to be a survivor of rape is problematic for a number of reasons.”

The performance art did bring a striking visibility to the tendencies of people to overlook the suffering of others, particularly in Isla Vista, where a girl lying on the ground in her underwear may simply be sunbathing.

“That crossed my mind. I hoped people weren’t doing anything because they thought I was [sunbathing].” Niebuhr said. “But I was covered in blood.”
Although the socially conscious meaning of “Face Down” is more readily evident, several of Niebuhr’s pieces require an understanding of her concepts and perceptions, revealing the deep connections between an artist and her work.

“I love puns,” Niebuhr said, explaining a piece where the word “crewel” (which is defined as a decorative form of surface embroidery that uses wool and a variety of different embroidery stitches) and cruel were played off one another. Niebuhr’s appreciation for double meanings seems to have extended into her pieces. The added depth and connections to her personality reflected in the pieces does not go unappreciated.

One piece, titled “Cellophane,” features a wooden canvas coated in bright blue and green paint. Niebuhr placed tape on the canvas, painted over it, then removed the tape strips to reveal the canvas beneath, allowing the viewer to see both the soft paint and the hard surface underneath. The title and the presence of the under-layer of wood both seem to echo the sad lyrics sung by Mr. Cellophane, a character in the famous play and movie Chicago, “You can walk right by me and never know I’m there.”

Another piece, “Black and Blue,” is simple in its execution. The piece is simply a blue and purple scarf hung on a painted black canvas. However, it is this simplicity that makes it so haunting, as the piece brings to mind images of domestic abuse. In addition, the scarf appears to represent domesticity, and the black expanse of the canvas forms an eerie landscape to balance such a gentle object across.

“I like seeing how everything works together,” Niebuhr said. “It’s about changing peoples’ perceptions.”

While some of the exhibit’s pieces were disturbing and haunting, the exhibit worked together as a whole to paint a complicated picture of a woman in the modern world, trying to balance conflicting ideas of femininity with a stable identity.