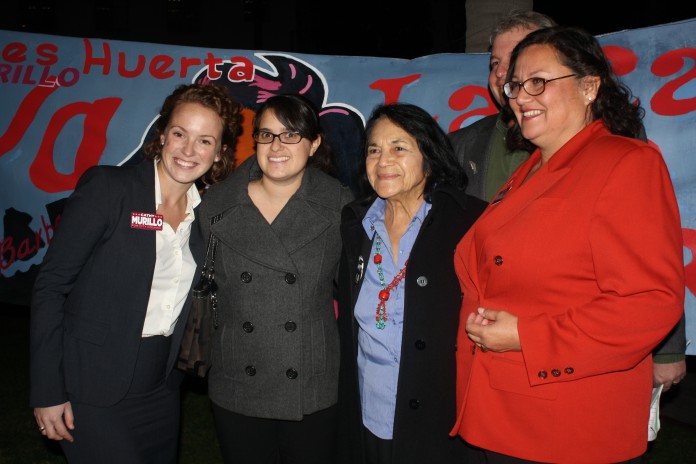 Huerta has an extensive past with social and political movements, particularly in regards to Latinos and Latinas. In 1962 she co-founded the United Farm Workers union with César Chávez and played a key role in the success of the national grape boycott instilled by the UFW.  Since she was a child, she has felt the need to actively instigate change.

“I was a girl scout,” said Huerta, referring to the importance of service instilled during those years as the spark of her lifelong purpose for activism.

Although Huerta fought political and social injustices through her ability to organize movements, as a Latina, Huerta also confronted the evils of discrimination. The biggest obstacle, she said, was to not give up on her goals despite the racism and sexism, which she never did.

Throughout her many years of civic activism, her main focus has always been localizing the issues. One of the reasons Huerta could speak out so strongly for the working class was because she could relate as a worker herself. She knew the struggles of the working poor. In her mind, closer connections must be made between the population and the decision makers representing these people. In regards to the wealthy Congressmen acting on behalf of the working class, she comments that often the decision makers are not culturally educated on the issues they vote on.

“They haven’t lived the life of a person of color,” said Huerta. This is why she stands with Cathy Murillo, and why the future decisions of the City Council are so important.

She explains that the change needs to begin at the local level and decisions should be made where the tax dollars are going to end up.

“We need to occupy the school board, the state legislators, occupy Congress,” Huerta said.

Her involvement with the current social movement, Occupy Wall Street, is based on this belief.

“For now, I’m a supporter,” she said, having seen the Occupy movements in Memphis, Chicago and Los Angeles. She also mentions the civil rights event she is planning with a number of former leaders of the Civil Rights movement, including a few who worked with Dr. Martin Luther King Jr. and participants of the sit-ins of the 1960s. The event will tentatively take place in New York City on Nov. 20.

Even at the age of 81, Huerta remains an activist for the people, continuously initiating the improvement of the lives of the working class and their families.

“This is what it’s about, right here,” Dolores Huerta said, pointing to the children taking a photo with her. “Isn’t it?”
Not only has she organized all kinds of youth educational programs and worked tirelessly for the betterment of underprivileged communities, but she stands out as an influential figure in history. Her heritage is Hispanic but her dedication to helping people reaches beyond race or gender.