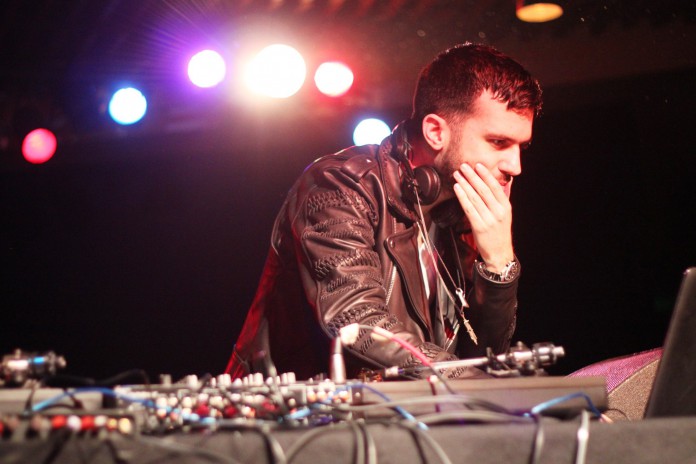 Very few DJs can jump with simplicity and ease from club sets, to prestigious festival performances, to “larger-than-life” stadium shows. Montreal-born and New York-based DJ A-Trak, who began his DJ life at the mere age of 15, has surpassed all expectations of a traditional DJ.

He created his own record label, Fool’s Gold Records, toured the world non-stop as a solo artist and produced as Kanye West’s DJ. He has helped develop the rising career of recording artists such as Kid Cudi, while remixing tracks for recognized artists such as Boys Noize, Simian Mobile Disco and Digitalism. He collaborated with the talented DJ Armand Van Helden and gave birth to “Duck Sauce.” In 2010, the duo’s radio smash “Barbra Streisand” titled itself as the dance anthem of the year. Recently acquiring many rave reviews for his performances, he has captured the attention of many and shared with them the true art of turntable-ism.
Lucky Santa Barbara students and residents were able to catch A-Trak’s party-rocking beats in the UCEN Hub on October 21.

“Hello Santa Barbara, I also worship Barbra. Shall we party tonight, UCSB style?” A-Trak said via Twitter around 5 p.m. that night, in anticipation for the show.

Opening up his set was Santa Barbara’s own local DJ, the talented Ruthy Lopez. As she set the mood around 8 p.m. with many house remixes, the Hub quickly began filling up with several anxious and ecstatic young people.

A-Trak took the stage around 9 p.m. He began his set solidly and built up the bass with his Fool’s Gold Radio mixes. As the famous “Heads Will Roll” by the Yeah Yeah Yeahs began playing, the positive vibes within the room began intensifying. Throughout the show, many Duck Sauce mixes were played as well. Their first radio smash, “aNyway” had the entire crowd jamming along. Of course, the song “Big Bad Wolf” stole the show. Every single person in the room was maniacally howling along with a collective, “ahooooo!”

“Soon the beat took over control, and the whole room was in sync,” said second-year biology major Frank Machado.

A-Trak also mixed a variety of genres such as The Rapture’s “How Deep is Your Love,” Above and Beyond’s “Save The World Tonight,” and Kanye’s And Jay Z’s new song “Nigg*s in Paris.”

A-Trak managed to convert the Hub into a remarkably upbeat atmosphere. He had every single person in the crowd lost in his music. The energy level of the room seemed at its peak for the entire two hours. A-Trak had brought everyone together in cohesive celebration of not only music, but of a memorable phenomenon.

After standing on the stage’s table, and coming off stage to shake a few attendees’ hands, A-Trak had the crowd hooked on his charm. He even had a couple crazed fans climbing the walls and beams of the underground location. Some students enjoyed the chaos, to say the least.

“From being aggressively pushed and elbowed, stepped on and having hair yanked out, it was more than worth the $24,” first-year pre-communications major Justine Estrada said ecstatically.

A-Trak ended his set with the whistle-based pop sensation “Barbra Streisand.” As the night ended, fans were not ready for the show to end. As he waved and walked off stage, everyone started chanting his name, demanding one more song. Of course, without much hesitation or disappointment, he was back at it again, this time with a DJ Mehdi encore.

Hershel wasn’t the only student to express their joy post-performance.

“He is an amazing performer! He interacts with his fans and never disappoints,” said first-year psychology major Terry Suon in excitement, once the show was over. “I’ll remember this night forever!”