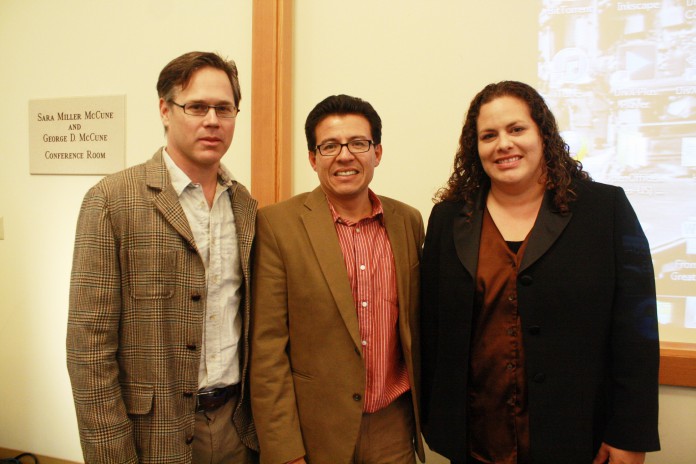 Although he passed away almost two decades ago, the historic impact of United Farm Workers leader, César Chávez holds a great deal of relevancy today. During an on-campus conference, “Symposium on the New History of César Chávez and the United Farm Workers,” research authors discussed the intricacies of the movement involving topics that had not been formally discussed. While one author wrote on the Grape Boycott’s strengths, two spoke on the weaknesses involving undocumented workers and the disparity of objectives within the UFW. All implied how these aspects affected the movement in the past and how they provide an understanding for the formation of current union organizations.

Matt Garcia, an author on the UFW boycotts, spoke on the localized leadership of the Grape Boycott that led to its success. He explained how overpowering ten vital cities proved more effective than attempting to take the nation down as a whole. Influential leaders like Dolores Huerta played crucial roles in New York City blockading grapes from being bought and sold in their respective cities of conflict. If not for these powerful localized leaders, Garcia says, the efforts would not have succeeded.

Miriam Pawel, author of “The Paradox of the UFW: Snatching Defeat from the Jaws of Victory,” said the reason for the reexamination of Chávez’s role in history was that “the new generation needs to get a sense that [this movement] is important and relevant history that needs to be fully explored.” In diving deeper into the details of Chávez and the UFW, she uncovers a side to the movement that was formerly glossed over.

Pawel summarizes the essential shortcomings of Chávez’s leadership of the UFW that lead to its eventual downfall. Internal conflict between its members and Chávez consistently involved a difference of goals or ideals. In her research, she explains that Chávez wanted “volunteers”- workers that gave up their jobs in order to participate in the movement. However, the many who could not afford to surrender their jobs were considered disloyal. He disdained those who wished to receive higher wages or move up to the middle class because in his mind, success of the movement relied on complete sacrifice. Unfortunately for him, his lack of resources to centralize power within the union limited his ability to realize his own ideals.

Frank Bardacke approaches the subject on a different note. Presenting research from his book, “The United Farm Workers and the Undocumented,” he focuses on the UFW’s handling of undocumented workers. He describes the United States-Mexico border of the sixties and seventies as open and easily accessible.

“Workers would step through the two strings of barbed wire to get on the growers bus to go to work,” he said. This increasing influx of undocumented farmworkers was an issue for the UFW. At first, Bardacke says, Chávez strongly opposed the use of illegal immigrant workers, as he felt they destabilized the capabilities of the strikes and boycotts. A slight change in heart in 1975 occurred only after the passage of the California Agriculture Relations Act, which did not address undocumented workers. Bardacke explained that the union could then use the undocumented as a scapegoat for failed strikes. Regardless, tension between these workers and union leaders was a constant issue.

All three authors agree that the UFW and its organization were imperfect but its successes and failures set an example to be learned from. This labor rights movement has now been thoroughly delved into revealing both positive and negative aspects. The two facets of Chávez’s legacy give current farmworkers who wish to organize in a union a blueprint for what does and does not work. Awareness of a pivotal era plays an important role in educating the people and could prevent history from repeating.