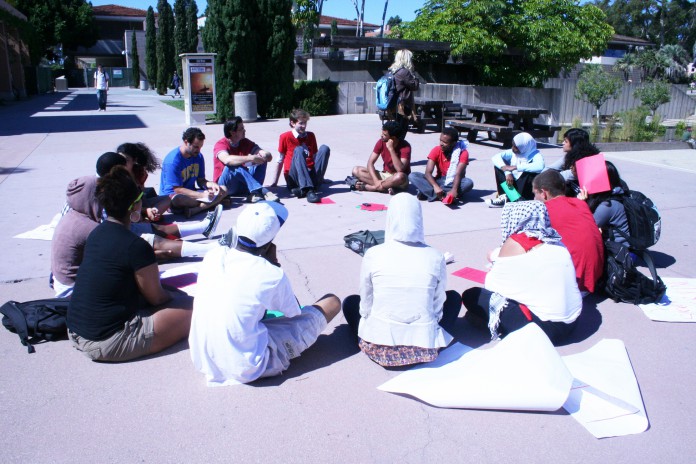 Students and faculty of different creeds and ethnicities gathered at the foot of Storke Plaza for a sit-in protest to speak out against the recent Irvine 11 verdict and what many called an institutional decision to silence student activism.

“Today is a national day of solidarity and a national day of action,” said Sophia Armen, a third-year political science and global studies double major. “Actions like this are happening across UC campuses.”
The protest was held on 10/11 in solidarity with 10 of the 11 Muslim student protestors who were found guilty by an Orange County court for two misdemeanor counts: conspiring to disrupt – and then disrupting – a speech made by the Israeli Ambassador to the United States Michael Oren at the UC Irvine campus in February 2010. Charges against one defendant were dismissed pending completion of 40 hours of community service.

The controversy surrounding the protest against Oren and the subsequent legal action taken by the Orange County District Attorney has led the group of student protestors to be referred to as the Irvine 11.

Nine students from UCI and two students from UC Riverside partook in the February 2010 protest and for their interference with the Israeli Ambassador’s speech 10 were sentenced to three years informal probation.

The incidences at UCI have led students throughout the UC system to question the bounds of peaceful protest on their campuses.

“The judge even recognized that the guilty verdict was excessive and he reduced their punishment,” said Armen, who also serves as an Off-Campus Representative on UCSB’s Legislative Council. “It is apparent that there is an attack on student expression. It’s overwhelming that rhetoric can be thrown around like conspiracy. Conspiracy is a really loaded term for planning a protest.”

The Santa Barbara sit-in acted with an open dialogue for students and faculty coming and going to raise awareness about the Irvine 11 and to discuss a student’s right to civil disobedience.

“I believe in freedom of speech,” said third-year economics and global studies double major, Armand Amin. “Ignorance is the reason for most suffering. When you suppress people and don’t let them protest, you support ignorance.”

Many of the protestors pointed their criticism at UC administration and UC President Mark Yudof for their response to the Irvine protest and trial.

“As students of this public university, which claims to value and foster an environment for free speech, we call upon the UC administration to stand by its values and protect and encourage peaceful student activism on campus,” read a flyer passed around the UCSB gathering.

“I am concerned about the potential silence effect,” said Walid Afifi, professor of communication at UC Santa Barbara. “I am also concerned about the silence from the UC President about selective enforcement of non-violent protesters. Everyone’s voice needs to be heard no matter if we agree or not.”

“This is a great opportunity to discuss what we want to do,” said Armen. “We are facing a tough year and this connects to everything progressive on campus. It’s bullshit that there isn’t more of an uproar on campus.”