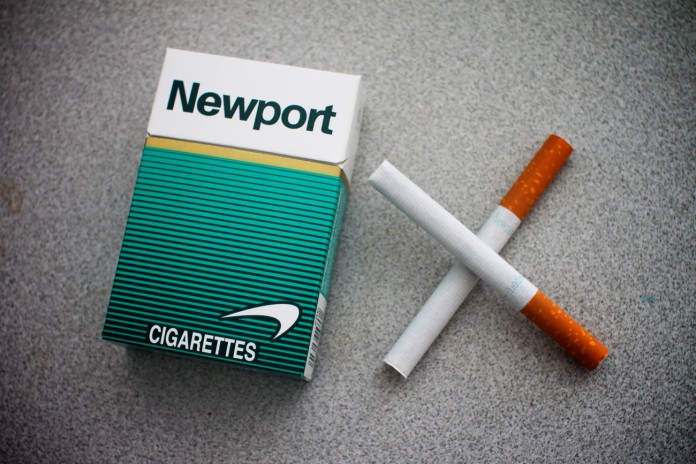 Last month, the Tobacco Products Scientific Advisory Committee (TPSAC) released a report to the FDA indicating that the continued sale of menthol cigarettes has an inverse impact on public health.

The report was initiated as a part of the Tobacco Control Act, which enacted a ban on the sale of flavored cigarettes. The ban criminalized the use of various flavors, such as candy and fruit flavors, in cigarettes. But the very popular ingredient of menthol was conspicuously left off this list.

According to an official report released on March 18, “TPSAC does conclude that the availability of menthol cigarettes has led to an increase in the number of smokers and that this increase does have adverse public health impact in the United States.”

The report specifically mentions two targeted groups: youth 12-17 years old and African Americans. Although cigarettes cannot be directly sold to minors, the marketing of menthol cigarettes seeks to create a perception of a healthier brand, which allows for the acquisition of new smokers.

“Menthol cigarettes have been and continue to be marketed with a set of associated branding elements and labels that connote health benefits… through the promotion of the particular features of menthol cigarettes that refer to their ‘freshness’ and sensory cooling properties,” stated the TPSAC report.

It is also important to note that there was no increased health risk to smokers of menthol cigarettes in comparison to their non-menthol counterparts.

While the committee did report its findings, it failed to provide a direct recommendation regarding the issue. But the findings and the conclusions seem to support a ban on menthol cigarettes. The report addressed considerations of the various results of a possible ban, such as the possible emergence of a black market as well as the possibility of menthol smokers quitting altogether. Support for either outcome was inconclusive and some policy leaders remained skeptical as to whether\ a ban would lead to smokers actually quitting.

“If the goal is to stop people from smoking, then it’s a bad way to do it,” said UC Santa Barbara third- year Biological Chemistry major Braden Smith. “If it were my brand, I would just find the next best thing.”

Debate can also extend to the idea of the government having the authority to ban a product which has shown to have no increased health risk than a similar legalized product. Such a ban would remove a preference rather than a health risk.

“[A ban] would be unequal to people of certain preferences. You can’t just ban something like that,” said Pasadena City College first-year Psychology major Sarai Henriquez.

The FDA has yet to take action based on the results of the report. It is unlikely that a full ban will take place due to the large financial and legal resources of tobacco companies who would have cause to sue if the FDA attempted to enact a ban without reporting a direct health risk.

The lack of action may come as a relief for those who enjoy their menthol brand, but the Tobacco Control Act, as well as the accompanying committees, signals an increasingly aggressive approach to removing cigarettes from the market. Giving the FDA authority over tobacco products regulation is a huge step in that direction, and if the TPSAC continues to do research on the subject, it may only be a matter of time before a national ban becomes a reality.

Would You Like Music With Your Coffee? by Danielle Shoshani