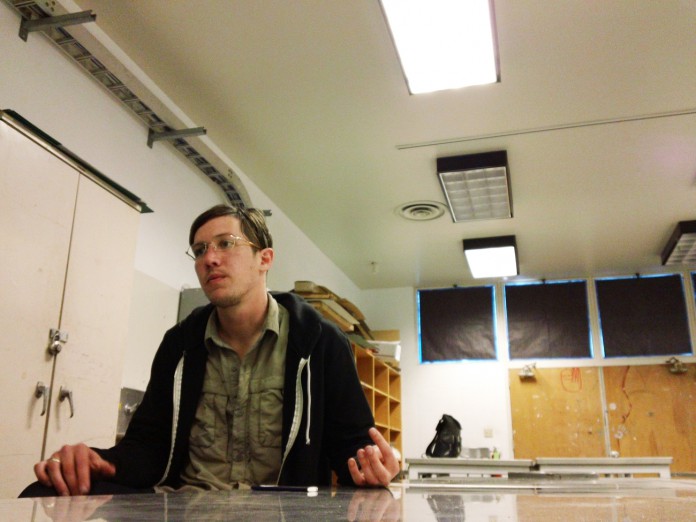 You’ll see them around campus in their understated trendy attire with their half-shaved heads and sick bikes; the art graduate students at UC Santa Barbara are more than just your regular social science teaching assistants. Upon sighting art grad students, one might wonder: who are they, how did they get so cool, and why did they choose to attend UCSB for graduate school when there are so many schools dedicated solely to art? I sat down and talked to a few of our Art department’s finest to find out what it is like to be in the graduate art program at UCSB.

Nick Loewen, a first-year graduate student from Goshen City, Indiana, studied as an undergraduate at Goshen College. Loewen chose UCSB for a variety of reasons, including the interdisciplinary practices, and the wonderful location.

When he arrived, much of Loewen’s work was on a 2-dimensional plane, but since beginning his graduate studies he has been expanding into installation works that include thread, spray foam and plastic. He pairs translucency and bubbles in the foam with the physicality of plastic to create a type of geological topography.

In his time at UCSB, Loewen has been learning how to balance his own work time with teaching and taking courses at the university. He explained how it is like learning to be self-employed; supporting one’s self with their work, selling one’s self as an artist.

In the future, Loewen hopes to travel and do some residency work, perhaps overseas.

“Wherever I go, it is always an effort, whether it be looking for gallery connections or just more spaces or groups of people to work with and places to work in, to show,” he said.

Loewen hopes to keep showing his work in gallery settings and also get a job teaching art at some point in his career.

Master of Fine Arts candidate Daniela Campins is a second-year from Venezuela who studied at Cal State Long Beach before becoming a graduate student at UCSB. What initially drew Campins to UCSB were two specific professors: Jane Callister, an experienced and talented painter, and Collin Gardener, a “theorizer.” Callister liked the idea of an intimate graduate program that would allow her to build a network with the other graduate students who work with different media.

So far as a grad student at UCSB, Campins has worked on producing a large body of work to add to her ever-expanding portfolio. She is also working on her MFA thesis paper, which has allowed her to better “inform” her practice with greater research. At the moment, she is working on putting together an exhibition featuring various MFA graduates from schools around Southern California to occur in Los Angeles sometime in July.

In the future, Campins sees herself working in L.A., perhaps with some sort of non-profit art group, putting on shows and continuing to show and sell her work in order to support her practice.

“I want my work to continue and progress; I would not want my work to ever get stagnant. It must keep moving and changing, [and I want] to always be excited about what [I] do,” she said.

Nikki Leone, a second-year in the two-year graduate program, studied at Virginia Commonwealth University School of the Arts in Richmond, Virginia for her undergraduate degree, then moved out to Santa Barbara to begin her graduate studies. Leone works primarily with sculpture. For some time, her work revolved around the creation of humorous and whimsical object-making, but recently it has evolved into a study of language or lack thereof.

“There is a failure of language and my brain doesn’t process language very well. I am working on translating language into objects,” she said.

Leone’s most current work, and the center of her thesis, is a life-size albino buffalo made of felt and fur that pees when yelled at.

When asked why she chose UCSB, Leone explained that the campus and location of the school factored into her decision in a big way because she needs to happy with where she lives in order to produce good work. Leone also appreciated the theoretical guidance she could receive at UCSB as opposed to her alma mater, VCU, which was largely formal.

In her time here, Leone is looking to strengthen her artwork.

“[I want to] make it stronger other than just self-supported, so that I can speak about my work and make it more successful,” she said.

Being able to assist in teaching the various art classes has allowed Leone to learn not only from experienced professors, but also from the struggling undergrads. Listening to her students brainstorm allows her to open up her mind, and she worries that if she were to work alone, her work might become stagnant.

“Seeing what inspires you [undergrads] helps inspire me, too,” she said.

If Leone has any free time outside of her studies and work at UCSB, she spends it with the love of her life, a French bulldog named Napoleon.

So don’t be intimidated by the Art grads, because chances are they are even more stressed and busy than you are.

The Case For PC Over Console Gaming