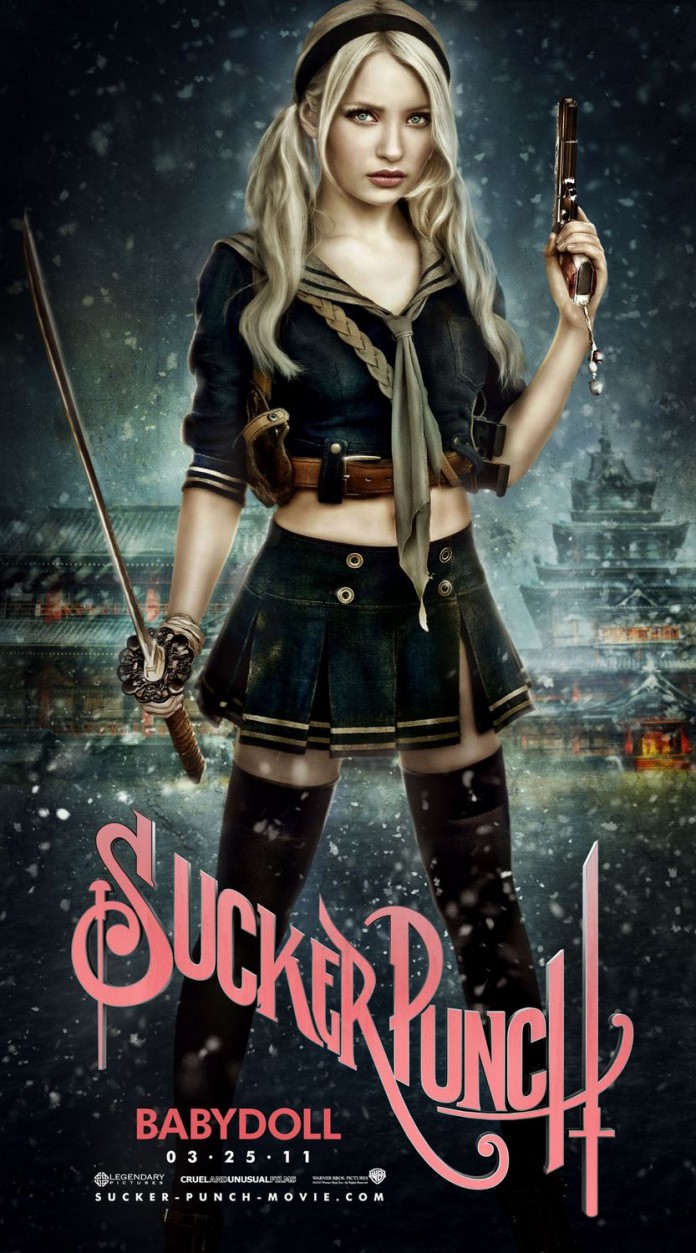 At first glance, Sucker Punch, directed by Zack Snyder, seems like your average over-sexed movie, filled with the tired image of sexy dominatrixes. Entering into Sucker Punch, I had this idea of the film, especially after watching trailers that affirmed my thoughts. As I sat in the audience staring at the big screen, I realized this movie was much more than that. Analyzing the movie from a feminist perspective, I began to understand that Sucker Punch was trying to show a tale to viewers that they don’t want to hear—a story filled with violence towards women, objectification and learning to cope in a world filled with sexual violence. Sucker Punch is forcing the audience to deal with social issues that we often want to forget about, the sexual abuse of women in mental institutions, the internalized objectification of women and the ways in which women cope with sexual violence.

Sucker Punch deals with varying levels of fantasy or reality (depending on how you look at it). We have the reality of the mental institution where women are physically, sexually and verbally abused by the male workers who are supposed to protect them. This is a historical reality; women during the early 20th century and arguably in this century as well, have experienced sexual violence in mental institutions.

Like Baby Doll (Emily Browning), women were often disposed of and placed in mental institutions when they were no longer needed, wanted, or when they transgressed what was deemed socially acceptable. Women in these categories were often lesbians, refused to be married, were gender non-conformists or were one of the other supposed mental “ills” of the time. Baby Doll finds herself in a mental institution because she was trying to protect her little sister from being raped by her stepfather. In doing so, she shoots a gun, misses the stepfather and the bullet mistakenly slides into her innocent little sister.

Sucker Punch is hard to watch at times, and its subject matter is uncomfortable. In Sucker Punch, we are faced with the reality of sexual violence and mistreatment of women. This reality is never actually shown, but the undertones are so obviously there that the average person would rather shield their eyes from the social problems of our world, as represented through the movie, than actively engage and think critically about these issues.

The costuming has been extremely problematic because the ways in which the women are dressed can be read as sexual objectification. Baby Doll is dressed in a schoolgirl outfit; others are dressed in skin tight leather and cleavage-revealing attire. These women are dressed provocatively when they are in the fantasy level of the Bordello. They are prostitutes of the 1940s and dressed as so. However, they are not objectified, and they are not gazed at through a sexualized lens. Instead, the audience never sees any element of the classic “tits and ass” shots. They wear clothes, but a desiring audience’s fantasies are never satisfied with the soft-core porn images of boob close-ups, panty shots, etc. This is where the film is brilliant because it is critiquing the very fantasy levels of nerd-boys and nerd-girls who love seeing women dressed and objectified in these outfits. Snyder refuses to allow for that form of objectification.

It’s important when watching this film to know when to take it seriously and when to sit back and let the movie take you over. In the third level of the movie in which the women must fight their way for their prize, all of us comic book/anime and video game fans can enjoy these sequences for the mere entertainment. We see these women fighting zombie Nazis, Cyborgs, Dragons and oversized Samurai. We see classic iconography that makes the inner nerd squeal with excitement. The action scenes did not disappoint.

The social commentary during this level of fantasy is complicated. On one hand, these women are controlling their life by gaining the elements of escape, yet they are told by a male authority what to do and where to get it. Even in a third level of fantasy, these women are still part of an institution of patriarchy, however, it is not without agency and they are able to navigate in this world with power.

At first watch, Sucker Punch can be easily misread as pornographic action garbage. However, once a critical lens is applied, we can begin to understand the film as a complicated historical representation of gender issues in American society. What fails is that Snyder wants to show a non-mainstream blockbuster to a blockbuster audience, masking the actual subject matter in the theatrical trailers as a mere action flick instead of showing a prospective audience what it is really about- the ways in which women cope with abuse.