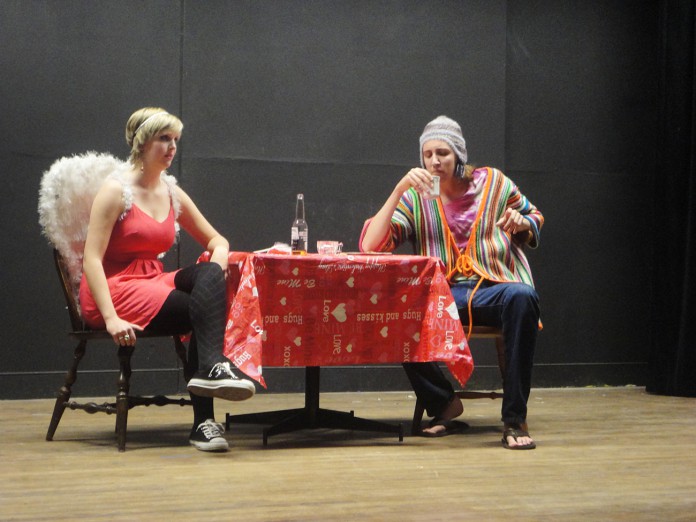 The effects of the 2008 Financial Crisis continue to be felt at UC Santa Barbara. With deficits digging at the pockets of federal and state budgets, the phrase, ‘budget cuts,’ has now become a buzz word rehashed many times over within the convoluted circles of politics and the everyday societies we encounter.

The opportunity that comes with crisis does not go unheard as artists everywhere illustrate their own modes of response and expression. Looking into bailouts and corporate bonuses, Michael Moore slaps America in the face with his documentary, Capitalism: A Love Story. To a smaller extent, musician Benjamin Folds, in Sarah Bareilles’ music video, Uncharted, takes a jab at budgetary cuts’ bitter pill and says, “Treble, bass, staff, [well] there’s none at this school because federal funding has been cut.”

Representing the UCSB community and reviving their own version of a Rage Against the Machine, Lina Aldana, Sarah Cho, Karen Urrutia-Mickler, and Monica Trausch, who are all fourth year Theater majors with the Film Studies Department, responded to the continuing cuts in the UC System by making “gold” out of the seemingly bland budget cuts.

“You don’t have to start out with any money. If you want it and love it, there’s a way to make things happen,” said Urrutia-Mikcler.
The ‘New Plays Festival,’ where playwrights are given the chance to see if their work can make it up to par, had to be cut in 2008 due to decreased state funding. In reaction to this, the four friends created a new group called UCSB Playwright’s Circle, where they meet weekly to discuss their works, bounce ideas back-and-forth, and give peer-group feedback and criticism to their plays.

“We [wanted] a place for young student playwrights, [and a place] where alternative voices can be heard and shared,” says Cho a fourth year Playwright major.

The help provided through the group was enough to help beginner writers.

Last fall, their solely student-run initiative succeeded in raising enough funds to exist. From this, they were able to hold their first play festival, entitled, Anti-Valentine’s Day Play Festival: It’s Not You… No Wait, Yes It Is.

Each of the four Playwright’s Circle founders presented a play they had penned, and Cho argues that the group is a perfect arena to express creativity. Now, with a play under their belts, the group is pushing for another collection of one act plays this spring, and they encourage other aspiring playwrights or any interested students to check out their weekly Monday meetings at HSSB 3201.

“It’s not a play if it’s not on stage. It’s different [when] you see it on stage, get feedback, [and] see the response from the audience,” said Trausch.

A Warm Hand on a WETT Opening: 2014 Vagina Monologues and...