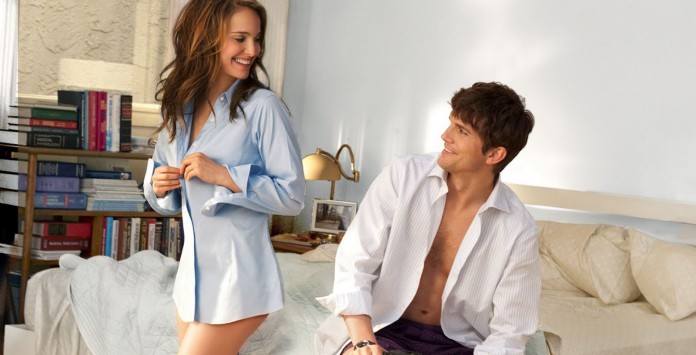 The Good: No Strings Attached is a very charming film. The two leads, Emma (Natalie Portman) and Adam (Ashton Kutcher) provide some excellent eye candy for guys and girls alike, and their characters are believable and have believable chemistry.
The plot twist is also a nice deviation from the standard romantic-comedy format: a guy and a girl attempt to be friends with benefits, but the guy craves a relationship instead of the girl. The plot device is very endearing and provides a refreshing perspective on sex and relationships.
The supporting characters were all very likable without overshadowing the two mains, and it was a pleasant surprise to see Ludacris in a film that doesn’t involve cars. There are some genuinely funny and sexy moments and plenty of cute montages to go around.
Californians will also enjoy the cinematography and get a kick out of recognizing streets, restaurants and California landscapes (there are even a few recognizable Santa Barbara shots).

Fans of Natalie Portman and/or Ashton Kutcher will get their money’s worth, as both actors appear scantily clad throughout the film.

The Not-So-Good: Although the film’s running time is only 108 minutes, it feels a lot longer than that, especially towards the end. This is probably due to the numerous awkward moments and odd dialog strewn throughout. There are a few issues with character consistency: established character traits fly out the window in the final act of the film. There are also some very strange, almost farcical scenes that the film attempts to pass off as “normal.” For example, Emma starts beating up Adam for almost no reason and at one point she even jumps on his back and it appears that they are playing leap-frog. The film expected us to take this scene seriously, however, as in the following scene they are shown with somber expressions. Huh? The movie also suffers from an overdose of “hip-ness,” as it combines Judd Apatow-esque scenes of casual drug use with so many colloquial references to the male sex organ that it just comes off as immature. Unfortunately, this means that a lot of the humor falls flat.

The Weird: I’m still confused as to why this movie was rated R. Aside from gratuitous swearing and one scene with a joint (both of which seemed unnecessary) there was really nothing too graphic. There is no frontal nudity, nothing disturbing at all, and, for an R movie, the dialog is extremely tame – there are no overwhelmingly explicit references to sex, drugs, or any other illicit activity (but they sure did say “penis” a lot). I kept waiting for the film to earn its R-rating but it never really did. It just felt like a PG-13 movie with an overuse of F-bombs.
It also seems that this movie takes place in some strange alternate universe where everyone owns an iPhone and is completely obsessed with it. I own an iPhone and even I found the constant iPhone pimping to be a bit excessive.

The Verdict: No Strings Attached is your standard friendly neighborhood romantic-comedy, nothing more and nothing less. You’ve seen worse and you’ve seen better, and this movie fits snuggly in between. It’ll make you laugh a few times but probably won’t have you in stitches.
There are quite a few genuinely charming moments, but the third act does drag a little. It’s a suitable movie for a Valentine’s Day date though, and it’s definitely worth checking out if you are a fan of Natalie Portman, Ashton Kutcher, or romantic comedies in general.