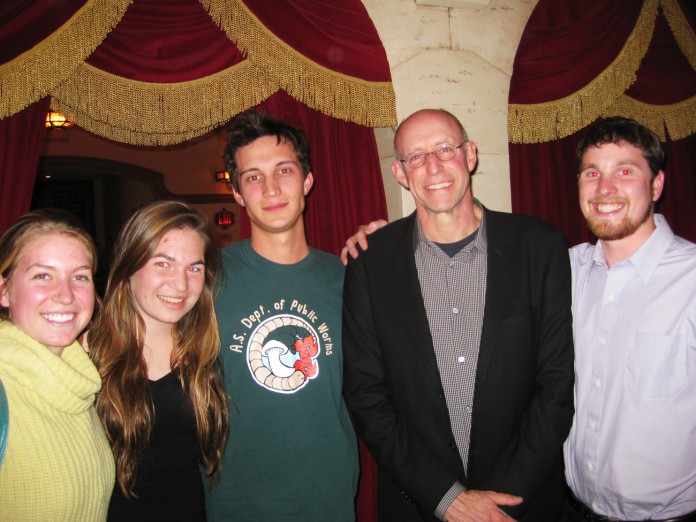 Pollan, a professor of Journalism at University of California, Berkeley and an influential leader in the growing grassroots food movement, has published four New York Times Bestsellers. He is perhaps most well known for The Omnivore’s Dilemma and In Defense of Food: An Eater’s Manifesto. In the latter, he proclaimed the now well-known mantra of the food movement: “Eat food. Not too much. Mostly plants.”

In 2010, Time Magazine included Pollan on its list of the world’s 100 most influential people.

Pollan spoke of the failings of the conventional food system and the inspiring individuals around the country who are stepping up to create real change in the food industry to a packed theater. He stressed the reality of the current situation that many people can simply not afford to support organic and local practices three times a day.

The discussion ranged from Michelle Obama’s White House garden and nutritional advocacy to the impacts of conventional farming on climate change. Pollan also talked generally about the negative practices of the food industry, and its detrimental effects on Americans’ health.

“Their [the food industry’s] business model and our waistlines are in conflict,” said Pollan.

A major theme in Pollan’s work is the importance of sustainable food education in America’s schools. He emphasized that teaching kids about food is just as important as teaching math or reading.

“We will not bring about the food changes we need unless schools are addressed and children are educated about the food system,” said Pollan. His statement was followed by an enthusiastic round of applause.

“Young people are on fire about these issues!” said Pollan, addressing the strong momentum from youth in the food movement. Some UC Santa Barbara students who attended the event may prove him right, thanks to actions taken around the UCSB campus and as the community continues to foster an expanding sustainable food movement.

Anthony Rum, a fourth-year student and leader in UCSB’s Student Food Collective, was inspired by the lecture.

“Pollan’s words highlighted the importance of the grassroots food movement and reinforced our efforts to build a community around sustainable food at UCSB,” said Rum.

The Student Food Collective plans on opening a student-run restaurant in Isla Vista in the coming months, featuring food cultivated through environmentally-friendly practices.

Nick Allen, UCSB graduate and past chair of the Environmental Affairs Board, also attended the event. He expressed immense excitement to see that the environmental movement at UCSB has shifted its focus to food, and that his previous club has taken on such a pertinent issue.

Santa Barbara County is a hub for food culture and its industry, and many examples of sustainable agricultural and responsible consumer practices are mere minutes from the UCSB campus.

UCSB students fought hard in the 1970s, when the environmental movement was taking off, to establish a local and organic Food Cooperative in Isla Vista, which has flourished since.

Fairview Gardens, just off of Fairview Avenue, was founded in 1895 and is considered to be the oldest organic farm in Southern California.

Orella Ranch, fifteen minutes up the Gaviota Coast, practices permaculture farming and, according to the owners, the ranch uses methods that respect the delicate balance between natural ecosystems and human habitation. It also uses a minimal waste system to ensure that the land remains fruitful and the environment unharmed.

Pollan’s speech fit perfectly in a place where the local, organic food movement is already taking off. Many Santa Barbara residents, including a strong force of UCSB students, are already conscious of the choices they make surrounding food.

The author and activist was very well-received, and ended his talk to a resounding applause from a community eager to create real change in today’s misdirected food industry.