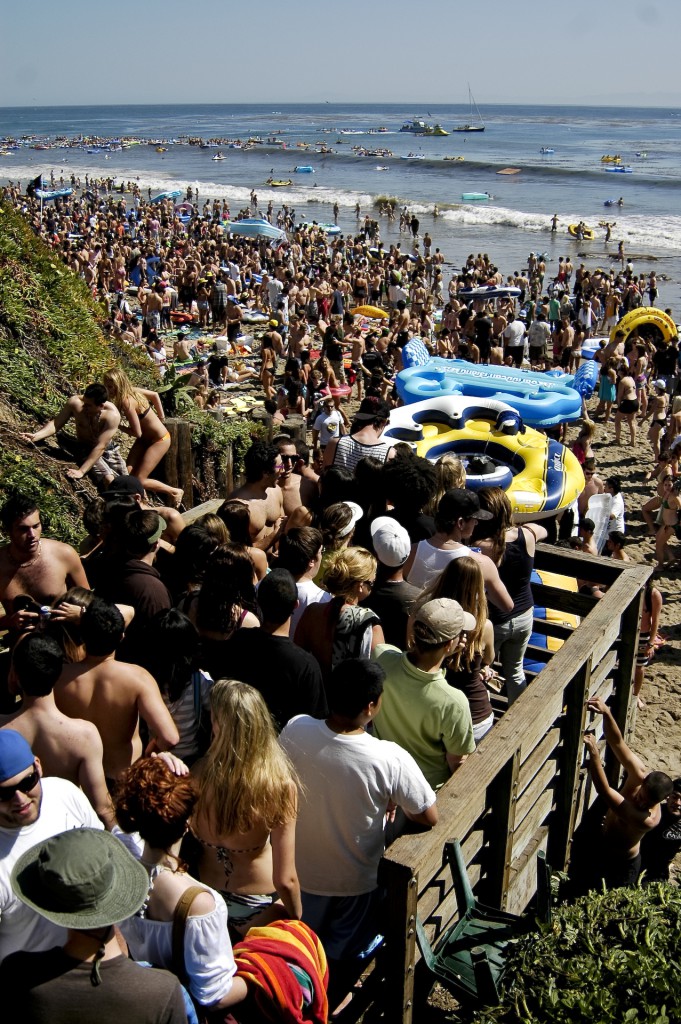 On Tuesday, November 3, 2009, the Santa Barbara County Board of Supervisors unanimously approved the alcohol ban on the beaches in the Isla Vista area after the temporary emergency ban implemented as a result of last yearâ€™s Floatopia expired.

â€œSome of the beaches already had a ban,â€ said William Boyer, the Communications Director for Santa Barbara County. â€œBut this decision was specifically regarding the beach that borders along the Isla Vista area.â€

Since the 12,000 person event beach-and-booze known as Floatopia, the Board has had an emergency six-month ban of alcohol on the beaches. Floatopia cost law enforcement alone $20,000 and it served as the basis of the boardâ€™s initiative to set up boundaries along Isla Vista where alcohol was prohibited.

These â€œtemporaryâ€ boundaries ran from the western point of Del Playa Drive, along the eastern border to Isla Vista and UC Santa Barbara, reaching north to the coastal bluffs facing D.P., and stretching a hundred yards south of the mean tide line. Boundaries also included beach access points from 6773 and 6769 D.P.

The Board’s unanimous approval has made these boundaries permanent, but whether that will stop Isla Vista residents from bringing booze to the beach is yet to be determined.

â€œI think if people want to drink, they will find a way,â€ said Emily Oâ€™Dell, a second year French major. â€œI mean itâ€™s illegal for people under 21 to drink and they still find a way. People are creative sometimes.â€

Though students may still find a way to drink on the beach, Floatopia may have seen the end of its infamous run.

â€œI donâ€™t think Floatopia is going to happen [this year] because drinking was the main part of [the reason for] it [the ban],â€ said Colin Burke, a fourth year cellular biology major. â€œIt just sucks that one day made [the Board of Supervisors] change their mind.â€

However, not all students agree that the alcohol ban is a bad measure for the Board to have passed. In addition to putting an end to costly events like Floatopia, the ban may have a positive effect on the local beaches, preventing additional pollution.

â€œPersonally, itâ€™s not going to prevent me from drinking [on the beach],â€ said Christopher Benham, a third year. â€œI think the mess that was left was terrible, and that we have this really beautiful beach; weâ€™re lucky to go here. We should have more measures to keep it clean. Itâ€™s a shame the study body doesnâ€™t respect [the beach].â€