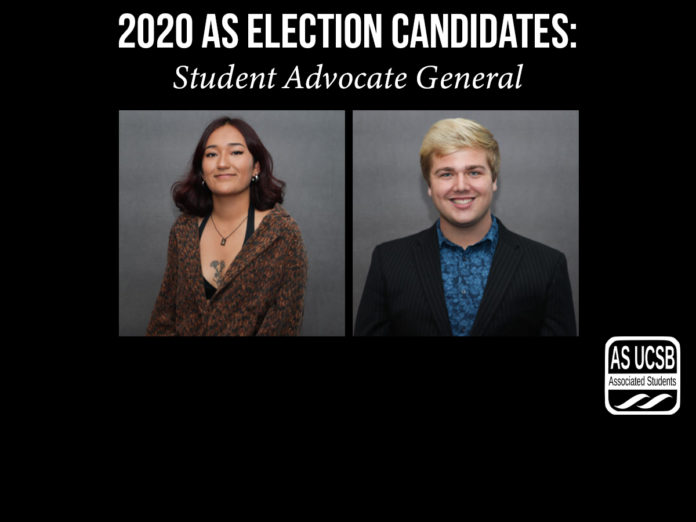 Associated Students (AS) of UC Santa Barbara (UCSB) will hold their general election this week from April 20-23. One of the executive positions up for grabs is student advocate general. The student advocate general is responsible for educating the student body about their rights as well as university and AS policies, laws, and regulations. They advocate for student rights, rules, and other areas of student conduct, and represent students in their dealings with university administration.

For this election, there are two independent candidates vying for the position of student advocate general, and both candidates sat down with The Bottom Line to discuss their platforms.

Ferguson’s main platform is facilitating diversity and inclusivity within the office. “We are supposed to serve all students, so I really want to work for historically underrepresented and underserved students on campus,” he said. “I’m advocating for those who don’t have someone who believes in them.”

He will focus on getting more international students involved in AS, noting that they currently make up 14 percent of the student population. “I understand how marginalized communities have been silenced; they’ve been treated as lesser than and they haven’t been included in the conversation,” he said. “I really want to facilitate inclusivity by increasing awareness of the office to more students.”

Ferguson has already shown his commitment to this platform by authoring a bill that allows students voting in the 2020 general election the option of adding an international student senator to AS Senate.

Ferguson hopes to create a team of outreach coordinators to expand awareness of the office as well as hire a director of public polling and data analysis to study the issues that are impacting students most. Other items on Ferguson’s agenda if he were to be elected would be: working on lowering student fees and eliminating the UCSB Drug and Alcohol College Alcohol and Substance Education (CASE) program fee by creating an online version of the course.

“With the way [the student advocate general office] is structured now, there’s so much more potential to actually bring about important change,” he said.

Melissa Perez also emphasizes the need to expand awareness about the student advocate general role and the resources that their office provides, saying that it is the “executive office that probably has the most direct impact on students on a one-to-one basis.”

“AS is often an inaccessible space for students,” she said. She hopes to raise visibility and provide transparency between the office and students. If elected, Perez would establish a division of caseworkers specifically for undocumented students. She will also work on lowering the GPA threshold for academic probation to ensure that students don’t lose their financial aid if their grades drop below the minimum requirement.

Similar to Ferguson, Perez has found a way to offset the CASE fee. She would create a grant that would be funded through the executive office so that students aren’t financially withheld from completing the program. “I think everybody should have equitable access to that and if they can’t afford it, the grant will really help,” she said.

If elected, Perez’s main priority is to expand the online appointment system that already exists. Perez added that because the 2020 academic fall quarter is likely to be online as well, Perez sees it most important to establish a way for students to still take advantage of the office’s benefits.

“I want to make sure that all corners of the university are reached and that everybody knows their rights and has access to their resources,” she said. “Students should still have access to the resources and the office and I think that is definitely feasible through establishing that web connection.”

Voting for the 2020 AS General Election opens on GOLD at 8 a.m. on Monday, April 20. Students will have the opportunity to vote for all of the candidates, including the Office of Student Advocate General, until 4 p.m. on Thursday, April 24.