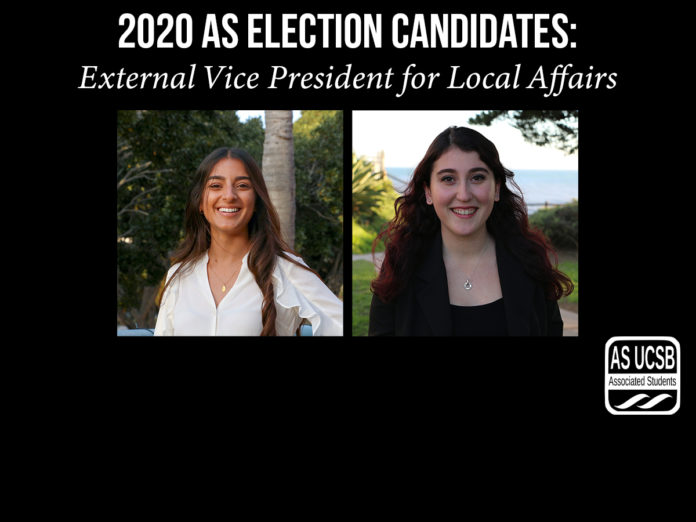 It appears the candidates in the upcoming Associated Students (AS) general election for the next external vice president for local affairs (EVPLA), Yasamin Salari and Lea Toubian, have had their ear to the streets of Isla Vista (I.V.). Both have placed addressing poor housing conditions in I.V., improving student-police relations, and increasing community safety to fight against sexual assault as priority policies in their statements on the 2020 AS election supplement.

Campus United candidate Toubian states she is seeking to take proactive action against sexual assault and domestic violence. Isla Vista Party candidate Salari expands upon this proactive action by seeking to form a monthly meeting of relevant organizations who may be able to come together to update the community on what they are doing about sexual assault and student safety.

The successes seen through community policing efforts by the school and relevant organizations over the years are areas of improvement in law enforcement relations that both candidates want to continue.

Salari, a former Isla Vista community services district coordinator (IVCSD), hopes to expand an anonymous student reporting effort called the Police Advisory Board. Students would share their concerns or safety issues with the police and report any incidents to the EVPLA office who would take those concerns  to the police organization involved in the incident to try and resolve it. Salari states, “It’s a way of working with the police, but also holding them accountable because they’re ultimately working for us and not the other way around.”

Salari also organized with the police to formulate their response to a typically busy Deltopia weekend that was never able to happen due to COVID-19. No horses would have been present to patrol the streets, and the number of police or vehicles used would not have been likely to intimidate the student population.

Toubian spoke to the power of less police presence, but highlighted that students across campus keep getting fenced in on weekends and still feel effects of over-policing during major or minor events. Gentler treatment of Isla Vista residents would most likely create more trust, a reality that Toubian is “hoping that the position will allow [her] access to have real negotiations and real talks about what the demands of the student body are, and to work with all the other entities that are already attempting to do that.”

Sustainability and minimizing cliff erosion are Toubian’s lead issues, with the former senator looking to hold I.V. landlords along Del Playa accountable, as some landlords have had oceanfront decks collapsing into the sea for years now. Her priorities include the performance of inspections and repairs as needed in regards to “enforcing the bluffs and their balconies.  Then if tenants do have to be evicted, [they] are given the proper resources; they’re not just kicked out and left to their own devices.”

Overall improper maintenance is a common theme within Isla Vista as Salari stated in her time at the EVPLA office this year about a conducted survey on what students felt about their houses, a potential mold situation, and how they would want to fix it. The office had planned to confront landlords about the mold issue during spring quarter this year but the action will be delayed to the following fall quarter.

Salari sees an affordable rent cap for properties within Isla Vista as a solution that can be feasibly implemented in combination with improved housing conditions through maintenance. Salari states that a rent cap will “make sure that people in I.V. are getting treated the same and we’re paying for what we’re getting out of our houses.”

Campus United’s Toubian is looking to expand Wi-Fi hotspots in I.V. and bolster student resource programs to make them emergency ready and operating year-round. She’s seen the resources offered from the variety of student organizations over the course of the COVID-19 pandemic and made a list to “use, if [she] hopefully get[s] elected, to know exactly who to contact, who’s offering these resources, what are they doing, and where could the collaboration have been and where should it be in the future.”

Salari created a change.org petition, currently with under 6,900 signatures, to implore university administration to perform tuition adjustments in light of the closure of facilities like the UCSB Library and Recreation Center. After a UC Regents meeting at UC Los Angeles, Salari said they told her tuition adjustments would not be granted because facilities were operational and the board had feared adding to existing uncertainty in students’ lives.

Voting for the 2020 AS General Election opens on GOLD at 8 a.m. on Monday, April 20. Students will have the opportunity to vote for all of the candidates, including the Office of AS External Vice President for Local Affairs, until 4 p.m. on Thursday, April 24.