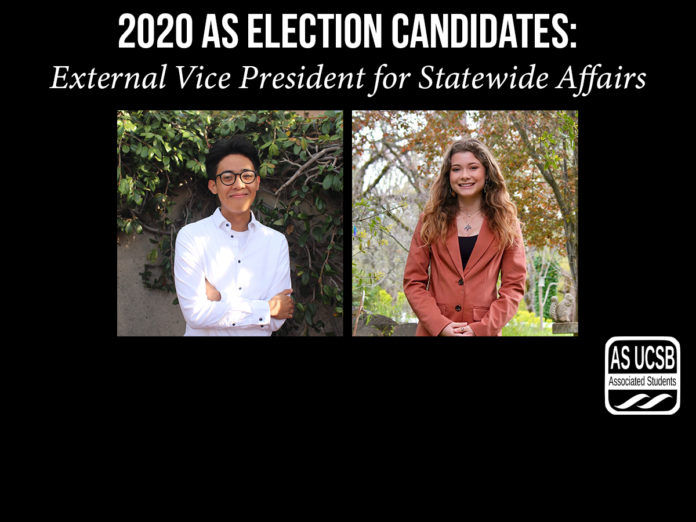 The EVPSA office takes part in governmental affairs beyond UCSB/Isla Vista and delves into policy at the county, state, and national levels.

As stated in the AS Legal Code and EVPSA website: “The External Vice-President for Statewide Affairs (EVPSA) acts as a liaison and official Associated Students’ representative to the federal Government, Statewide Government, UC Regents, System-Wide Administration, the UC Student Association (UCSA), US Students Association (USSA), and state and national student coalitions.”

The Bottom Line spoke with both candidates to gain insight on how they would navigate their connections with the mentioned organizations and how they plan to service the students of UCSB.

The Isla Vista candidate, Alia Reynolds is a third-year global studies and philosophy double major with an emphasis in ethics and public policy.

One of Reynolds’ main focuses as EVPSA would be to create support resources for survivors. For the past two years, she served as the president of the 501(c)(3) Students Against Sexual Assault (SASA) organization, the director of the UCSB SASA Chapter, and also as the undergraduate representative for the UC-Wide Title IX Student Advisory Board. These are issues that she has been fighting over and wishes to see real change for.

“The first thing that I think is important to do with [supporting survivors] is protecting student survivor’s rights by fighting with everything to uphold current Title IX standards and even reform those standards,” stated Reynolds.

Another major focus in Reynolds’ platform is to reallocate funds towards vital student resources, especially for mental health purposes and survivor counseling.

“I want to prioritize student needs,” Reynolds explained, “requiring the university, either through policy or through activism and advocacy to reallocate money that they currently give to private and for-profit companies.”

Reynolds wants to hold the university accountable for the misuse of funds towards private associations and wishes to instead apply these funds for vital student resources. On the topic of accountability, Reynolds further stated her desire to reallocate funding away from the salaries of the UC Board of Regents and towards greater student resources. She went on to explain how she would work to enact these policies by personally lobbying on this platform.

A main responsibility of the EVPSA is to act as a liaison for outside organizations such as the UC Student Association (UCSA), an organization dedicated to the betterment of the University of California. In addition, the EVPSA acts as a representative to the US Students Association (USSA), which focuses on giving national representation to student voices, particularly those from underrepresented communities.

On the connections to UCSA, USSA, and other liaison connections Reynolds commented: “I want to … make sure that those entities which hold so much power over us as students are truly reflective of what we want. We pay those entities’ salaries, so we should be the ones that are able to tell them what we want.”

Reynolds went on to explain how she feels these entities are not currently being held accountable, stating “I think that needs to happen in order for students to receive a more equitable education and just access to education in general. Especially for marginalized communities.”

The Campus United candidate, Beau Karnsrithong, is a second-year double major in environmental studies and film and media studies. His platform focuses on improving student voter turnout for the upcoming presidential election, maintaining the UC budget surrounding COVID-19, and continuing to improve the contract with USSA.

Prior to running for EVPSA, Karnsrithong was a voter registration coordinator for the EVPSA Office, a resident assistant at the Anacapa residence hall, and was a founding member of the GauchosVote Coalition.

With UCSB’s historically high student voter registration Beau Karnsrithong remarked: “I want to increase civic engagement on campus so students have the opportunity to enact positive change. My goal is to increase our voting rate through collaboration with campus orgs in order to best prepare for the upcoming presidential election.”

Beyond voter registration, Karnsrithong also explained he wants to ensure that students have “access the resources needed to thrive during online instruction and when we return.” He went on to state his hopes to ensure that the UC system continues to receive funding and maintain their budgets throughout COVID-19.

Karnsrithong further stated he wants to increase the number of students who know how to be involved in this process, namely by making lobbying training accessible to all students, regardless of prior experience. “I would hate for someone with an issue to get lost along the way cause they do not know where to begin and how to properly lobby,” he stated.

Karnsrithong also wants to work on improving the current contract with USSA. He primarily wants to focus on maintaining the USSA lock-in fee which funds organizations and clubs on campus.

Voting for the 2020 AS General Election opens on GOLD at 8 a.m. on Monday, April 20. Students will have the opportunity to vote for all of the candidates, including the Office of External Vice President for Statewide Affairs, until 4 p.m. on Thursday, April 24.