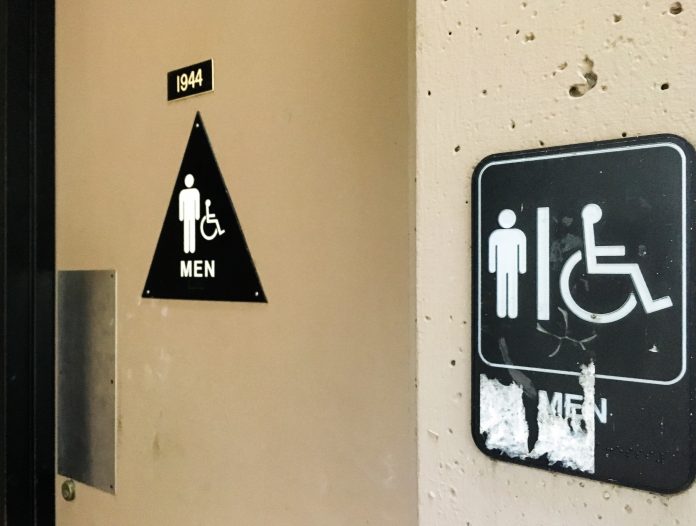 Among students, a common complaint is the deteriorating state of campus bathrooms. Complaints such as this one are often shared on social media, where other students can commiserate and sometimes inform others about the cause of what they complained about. These deteriorating bathroom conditions are caused by a lack of funding for the maintenance of state-funded buildings.

Ruby Preciado, a third year psychology and sociology major, was on her way to an 8 a.m. class in Buchanan Hall on Tuesday, May 15, when she stopped to use the bathroom in the building and found a stall door off its hinges, on the floor.

In an interview with The Bottom Line, Preciado explained that she posted a picture of the bathroom on the school’s Facebook meme page because she knew the student population would relate to the situation. The post garnered over 900 reactions.

The Facilities Management department of the UCSB Design, Facilities & Safety Services is responsible for routine maintenance and repair of “state supported, general funded buildings,” including Buchanan Hall. Work requests for non-emergency and non-safety issues can be made through email or by phone, with online requests only being allowed for authorized users.

However, Facilities Management is limited in its capacity to address all maintenance problems concerning bathrooms. As stated on the Facilities Management’s Services & Funding section of the webpage, their “priorities undergo constant re-evaluation in light of budget and other external factors.” They must operate and maintain facilities that obey the University of California Office of the President Facilities Manual.

Plumbing fixtures are included in “deferred maintenance,” which is “maintenance that was not performed when it should have been or was scheduled to be,” as stated in the manual. Currently, there are no state funds dedicated specifically to deferred maintenance.

Deferred maintenance started during the Great Recession in 2008, where the state deferred higher education maintenance projects because there was no money, as Julia Stevens, second year political science major and member of UCSB’s Lobby Corps, explained to The Bottom Line. Now, ten years after the recession, the state continues to defer funding.

Governor Jerry Brown’s recently revised budget plan for higher education in 2018-2019 includes a one-time $100 million increase for deferred maintenance, which stands in contrast with its history of being chronically underfunded. However, this extra funding will be split among all the UCs, and is still not enough when considering all that needs to be fixed.

Stevens believes student involvement and advocacy makes a difference. She encourages students to share their stories with legislators and vote for representatives who promise to fund the UCs.

As Stevens said, “There have been multiple legislators who have said, ‘We’ve heard students’ needs — that’s why we’re pushing for this.’ The lobbying that we do really ends up being impactful. For legislators, being able to [hear] our real stories and not statistics [is] really impactful.”