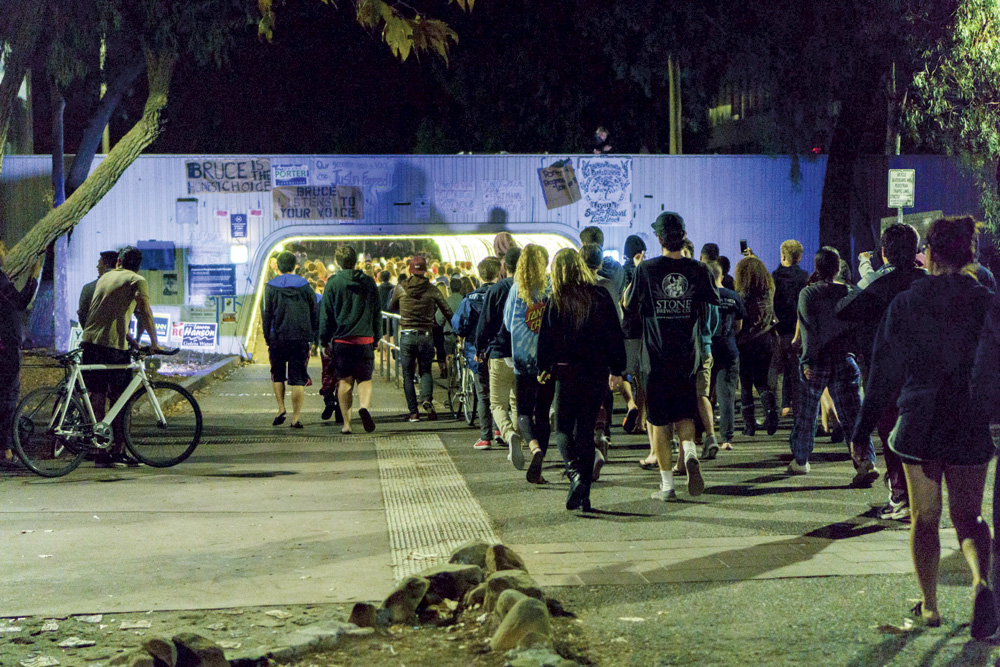 On early Wednesday morning, 2016 election results confirmed that Republican nominee Donald Trump would be the 45th President of the United States. Within the same hour of Trump’s acceptance speech, student protests erupted across all UC campuses.

Shouts of  “Not My President” and “F*ck Donald Trump” rang through the night, from UCSD students marching onto Interstate 50 to UC Davis students chanting through Russell Boulevard.

“[Trump] may have won the presidency, but he’ll never win our generation,” said Keith Lemus, a sociology student at UC Merced that marched alongside other UCM students on Wednesday, as reported by the Merced Sun-Star.

According to Bloomberg, Democratic nominee Hillary Clinton won 55 percent of voter support, in comparison to Trump’s 39 percent, among the younger portion of millennial voters (between the ages of 18 to 29).

The student marches were largely non-violent, resulting in either minimal or no arrests on UC campuses.

Few incidents of damage and injury were reported; one woman was hit by a car during a UC Berkeley protest; some UCLA protesters tried to tip over a car but stopped after noticing a passenger inside. There have been reports of Trump doll and Trump pinata burnings at UC rallies, but with no auxiliary property damage.

Most impromptu student protests were followed up with organized rallies; UCSB students and community members joined at Storke Tower to voice their fears and frustrations on Wednesday afternoon.

At UCSB, some professors chose to delay midterm exams that Wednesday due to students dealing with emotional distress from the election results.

Antony Nguyen, a first year history major, reached out to one of his professors in an email when the election results were coming in.

“With the imminent doom of everything I support and stood for, I have not been in the right mind in order to study,” Nguyen wrote. His midterm was delayed.

The rally was organized by a UCLA student activist group Young Progressives Demanding Action. The YPDA president, Gabby Martinez, said that students should use civil disobedience to effect change.

“We will continue to work and strategize for how to deal with a Trump presidency,” said Martinez, a fourth-year political science student, according to the Daily Bruin.

UC faculty and administration have come forward after Trump’s victory to vocalize their shared discontent and to exhibit support to all UC students.

On Thursday afternoon, UC Berkeley professors and faculty equity advisers led a follow-up rally of a crowd of approximately 400 people.

The Daily Californian reported that the rally opened up with faculty members expressing their disappointment in Trump’s election.

“We should come together to show students that we support diversity, equality, inclusion — to show that we’re stronger together,” said rally organizer and associate professor Mary Wildermuth.

“This is a time to hold each other with respect, and dig deep to support one another. There will be time later for us to strategize how to respond to the challenges we as a university may face,” Blumenthal wrote.

UC President Janet Napolitano and all UC chancellors issued a statement on Wednesday to reassure students of the university’s commitment to diversity.

“The University of California is proud of being a diverse and welcoming place for students, faculty, and staff with a wide range of backgrounds, experiences and perspectives. Diversity is central to our mission,” it said.

Napolitano reaffirmed that the University is committed “to foster an environment in which all are included” and that all students “are given an equal opportunity to learn and explore.”