Home A & E ‘The Revenant’: A Master Class In Film 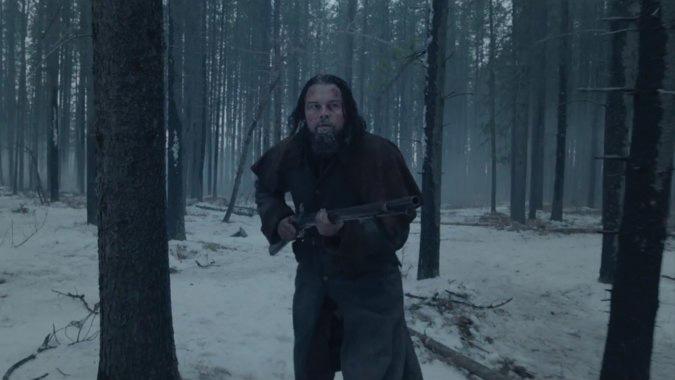 The Revenant is a film that checks every single trigger warning — this is not a film for the fainthearted. Even the toughest human beings will squirm as they watch what is without a doubt the most gut-wrenching film of the year (and possibly all time).

To give you an idea of how gruesome this film can get, during one of the brutal scenes (which there are plenty of, and they come in long, vivid sequences), an audience member was so traumatized they left the theater to throw up. However, when it’s all over and done with, the audience is left gratified (and maybe a little scarred) having witnessed this grit-filled cinematic masterpiece. This is the kind of film that future generations of filmmakers will and should study.

The script for this film was in Hollywood limbo for 14 years before Alejandro G. Iñárritu dared to go where most directors wouldn’t. It is hard to believe the same man who made Birdman also made this film. While both are chefs-d’oeuvres, the two films could not be any more different; one is a witty, meta-fictional comedy dabbling in magic realism, and the other is literally a death-defying, true tale that is bound to haunt whoever watches it. If Iñárritu’s goal was to establish himself as the greatest filmmaker of the twenty-first century, he is well on his way to dethrone any contemporary vying for the title, including Christopher Nolan, David Fincher or even Quentin Tarentino. His boldness resembles that of a young Stanley Kubrick or Francis Ford Coppola. Directing this film was a daunting task, and only Iñárritu was capable of doing it.

This film required intense outdoor shoots in remote corners of the earth, with the harshest of living conditions and in critically low temperatures. Iñárritu gives the audience scenic wide shots of the landscape, but doesn’t give them enough time to admire the natural beauty as he immediately cuts to contrasting shots with grimy images of bloodied human beings and animal rotten animal (and some human) carcasses. Either way, you can’t take your eyes of the screen. Iñárritu especially lets his inner artist thrive during the hallucination and dream sequences. The spellbinding scenes are made possible thanks the incredible cinematographer Emmanuel Lubezki, who used only natural lighting for this film. The CGI team must also be acknowledged for the gripping, vicious bear attack scene.

The commitment from the crew is matched by the commitment from this cast. Tom Hardy finishes off an incredible year in acting with a near perfect performance with a flawless northern accent as the films frustratingly sadistic antagonist. Will Poulter delivers a touching performance as Jim Bridger, the one character with a hint of purity. However, this film belongs completely to Leonardo DiCaprio as the film’s protagonist Hugh Glass.

Any memory of DiCaprio as the reigning teen heartthrob of the nineties will be wiped clean after viewing this film. It’s hard to imagine that the same man who once delicately lifted Kate Winslet on the bow of the Titanic is the same man who cut up his dead horse, removed its insides and then proceeded to sleep in it. Naked. The Internet is about to have a field day because Leo is finally going to get his hands on that Oscar. If anyone ever doubted this man’s acting talents and wrote him off as just a pretty face, they should watch this film and (like Glass) eat dirt. Aside from one moving scene where he attempts to catch snow in his mouth, there is nothing pretty about this performance.

Hugh Glass refused to die. His journey consisted of an infinite amount of close calls with death, and so it makes sense that making a film about him would also bring any actor portraying him to the brink of death. That is what happened with Leonardo DiCaprio, but like Glass, DiCaprio persevered and was made stronger. If Iñárritu has established himself as the number one director of his generation, DiCaprio has established himself as the number one actor; it’s a match made in cinematic heaven and the final product is proof that (although it could never be described as heavenly) this is definitely a once in a lifetime film. Watch it if you dare.