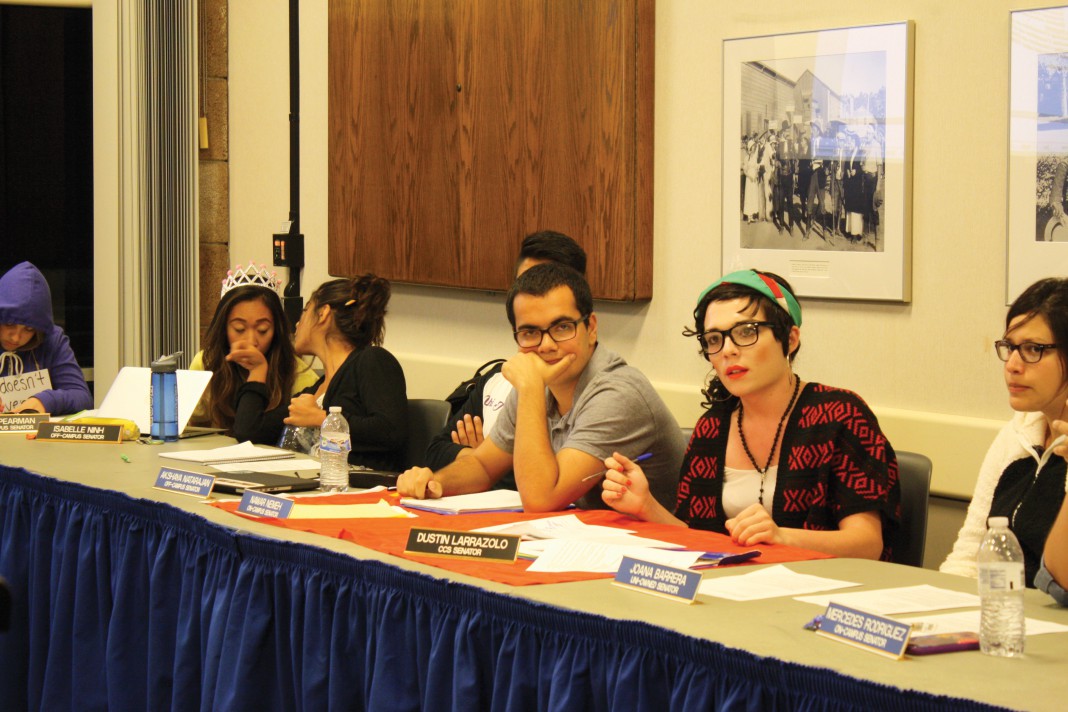 The Associated Students Senate tackled elections code reform at their Oct. 28 meeting, leading to a discussion about the reasons for the drastic reforms.

Five bills were introduced by On-Campus Senator Nawar Nemeh and College of Letters and Science Senator Stevan Abdalmalik when Senate reconvened for fall quarter. All five bills were designed to revise AS Legal Code and ensure fairness in student government elections.

Senate unanimously passed the first of the five bills at the Oct. 14 meeting. Among these was A Bill to Switch Associated Students Election to a Single Transferable Vote System (STV), which changed the voting system from First Past The Post, where candidates who receive the most (but not necessarily the majority of) votes automatically win, to STV, which ensures that candidates who receive the majority of the votes are elected and allows students to rank their choices for electable offices.

Last year, the Open People’s Party (OPP) was the only political party to run a full slate of candidates for AS executive offices and Senate. A new party, the Free-Thinking Patriots (FTP), ran a partial executive slate, and a couple of candidates for Senate, but only one FTP on-campus senator candidate, Brendan Korbas, was elected to Senate. However, Korbas has since not served on Senate. The Democratic Process Party (DP), which has functioned and ran multiple slates in years prior, did not submit any candidates for the 2015-2016 election. As a result, AS has been criticized for only having one political party, which may not truly represent their constituents.

The redefinition of political parties within the Office of Student Life would also establish parties year-round. At a prior Senate meeting, AS President Jimmy Villarreal worried that this would invite more animosity on an already divided campus. Off-Campus Senator Natalie Jordan expressed a concern that political parties housed under OSL would lack transparency.

“I don’t understand the point of registering as an OSL,” Jordan said. “I know that technically, [parties] could not be year long, but I think that there would be this unspoken belief that they’re an OSL and a year-long thing and I think that could create a lot of tension within AS outside of elections time, which is something we really don’t need. Making political parties a part of an OSL group as an entity that has control over parties kind of disturbs the autonomy of this Association. It’s this power that undermines us, and I feel that that gives decision making to an outside entity.”

However, Nemeh has previously stated that political parties like OPP do exist year-round on UCSB’s campus, in an informal manner that approaches individuals to run for elected office as early as halfway through fall quarter. In a survey of the members sitting at the table, over one-third of the senators present believed that parties did not exist throughout the entire year.

Allegations of hazing and racism within OPP were among the issues brought up by senators at the meeting. Many brought up how senators would be required to attend frequent party meetings in the evening and then be forced to wake up at 3 or 4 AM to do lit drops (going door-to-door with informational voting pamphlets and flyers) in Isla Vista, while being threatened and demoralized. Within the Senate, there seemed to be some confusion on how this could occur given that university employees, including those who receive honoraria, are mandated reporters. Some found it hard to believe that, given this information, adults in AS would not have stopped it, since they are required to report allegations of harassment such as the cases described at Senate.

Off-Campus Senator Jerel Constantino acknowledged the painful experiences that some faced in their campaign and Nemeh’s efforts to combat this.

“Last year was definitely unique in many different situations, but especially in the way that people handled it,” Constantino said. “However, with all due respect, I think that a lot of it came just from the campaign. When I was waking up at four in the morning to do a lit drop, I was tired. I was barely trying to keep awake. […] The way that people treated me when I got there didn’t make that any better. […] A lot of the methods that they made us do work. They made us go out there and motivate people, and I’m not saying as in screaming, but as in the process itself, which many define as hazing, I don’t exactly see it as that. I see it as just the way to run a campaign because we are running a campaign and we have to win, and that involves waking up early in the morning and sometimes getting screamed at. My point is that, are we looking at this as purely one scenario, or is it throughout the system?”

In response, Nemeh shared his story of how he worked during that election cycle and got sick during his midterms. After returning from the Student Lobby Conference one weekend, he stayed up late studying and campaigning, and despite a lack of sleep, was informed that he would have to do a lit drop in the early morning.

“These campaign strategies are fine,” Nemeh said. “This is not the issue. The issue is when I came up to these people, some of whom are in this room I may say, said ‘You need to come.’ They called me. They picked me up, still in my pajamas, to take me door to door. Do you know how much I reevaluated my life decisions? I was with former [On-Campus] Senator [Lacy] Wright. She’s honestly one of the best people to have ever existed. She held my hand as I was throwing up in a backyard in Isla Vista. Because of how sick I was. I have gastric acid reflux because of this election. This is not just me talking sh** or me not wanting to do my work or not understanding my campaign is stressful.”

Abdalmalik shared a similar story to Nemeh’s from campaign season. During spring quarter, the Letters and Science Senator was on academic probation, and in danger of being ineligible to run with OPP if he failed another course.

“AS does not have a culture of inclusion,” Abdalmalik said. “I, as well, experienced this. The day that I had two papers due [during campaign season], I was on academic probation. I told them, ‘If I don’t finish these papers, I will be ineligible to run.’ Their response was, ‘You have to f***ing go, or else. Period.’”

Off-Campus Senator Akshaya Natarajan said that upon receiving her OPP candidacy photo, campaign managers had edited it to look lighter than it appears. “As a senator that ran with OPP this past elections cycle, I’ve felt tokenized and I felt whitewashed as a woman of color,” Natarajan said.

Of the four bills on the table, only A Bill to Update the Status of Write-In Candidates was passed. A Bill to Update Article XVII Section 5 of the Associated Students Legal Code was tabled indefinitely, while the other two were tabled for a week.