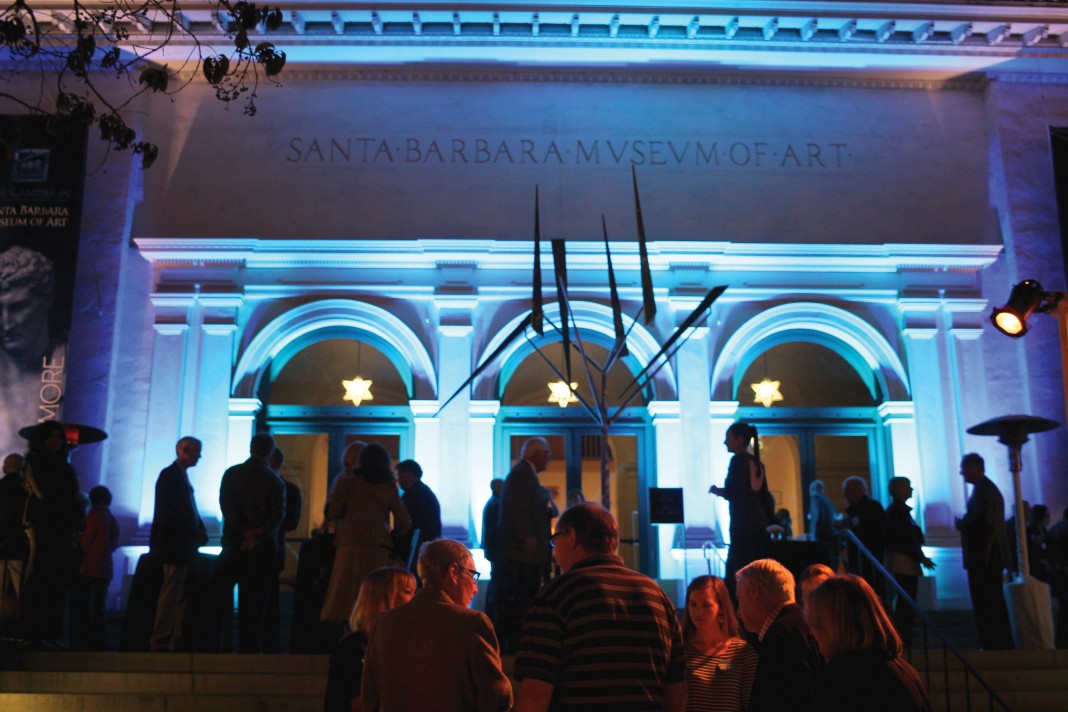 Art is important. There is no denying this. So when the local art museum begins a plan for renovation and expansion, everyone should be excited.

This past Saturday, the Santa Barbara Museum of Art (SBMA) held a wall-breaking ceremony. The wall-breaking symbolized the beginning of renovation and expansion that the SBMA plans to do over the next five to six years called “Imagine More”. Members of the community, as well as the museum’s, donors gathered together to celebrate the start of this new project.

The front of the museum was beautifully lit up, and had a jazz band on the side greeting the guests with music. Before the walls were broken, guests could go explore some of the open galleries in the museum, including a new exhibition that opened Nov. 8 and will continue on to Feb. 21 of next year that features Peter Halley’s non-objective geometric paintings. Small delicious snacks were also available and waiters went around offering guests exquisite delicacies. There were also art activities, and a place where one could have their picture taken in front of a wall that held construction materials.

At around 6:15 PM, a few speakers, including Museum Director Larry Feinberg, went up to speak about the museum’s plans for the future. After they finished talking, the main event of the night began. The wall-breakers put on goggles and helmets, and began to break down the wall while music played in the background. After a few seconds, blue balloons fell from the ceiling. The wall-breakers included Santa Barbara Mayor Helene Schneider, major donors and other important people behind the project. After the main wall-breakers were finished, raffle ticket numbers were called so that a few lucky guests could have the opportunity to break down the wall further. A social media contest winner also was allowed to participate.

The SBMA has been around for 75 years and is a collection of six separate buildings that have been constructed over that period. This plan for renovation is not only for the museum’s growth, but also for its safety, given that some of its buildings have been around for quite some time. The project consists of five stages, with the first beginning as early as January of next year. This first stage will focus on seismic retrofitting for earthquake protection, roof replacement and the creation of a Contemporary Art Gallery, as well as other important upgrades.

During its renovation, the museum will still remain open to visitors as well as to new exhibitions. Occasionally, the museum will offer free admission when some galleries are closed off. Its upper level, the Asian Art Galleries, as well as its antiquities, which are held at the Ludington Court, will be taken down in order to protect them from the construction. Some of the antiquities, such as the impressive marble Lansdowne Hermes, will be borrowed by the J. Paul Getty Museum to be conserved and displayed at the Getty Center and Getty Villa.

The museum contains many collections that cannot all be displayed due to its small size. The renovation will add 25 percent more space so that these works can be shown. Also, its café and gift shop will be expanded and renovated, and three new galleries will be added. The museum’s Luria Activities Center, which offers outreach programs for students and teachers, will also be tripled in size, and a new rooftop will be added as a place for private events and wedding receptions.

The project is entitled “Imagine More” for a reason. The people behind it feel as though the museum has great potential and room for growth; it imagines more for itself and for the community. The project hopes that its impact affects the community of Santa Barbara in a positive way by introducing them to ancient and contemporary art, and by having them engage with art in general.

Overall, the museum plans to become a great metropolitan place of art that will hold great exhibitions in its future. The SBMA will continue to act as an important and central part of downtown Santa Barbara, alongside the public library and the stunning County Courthouse.