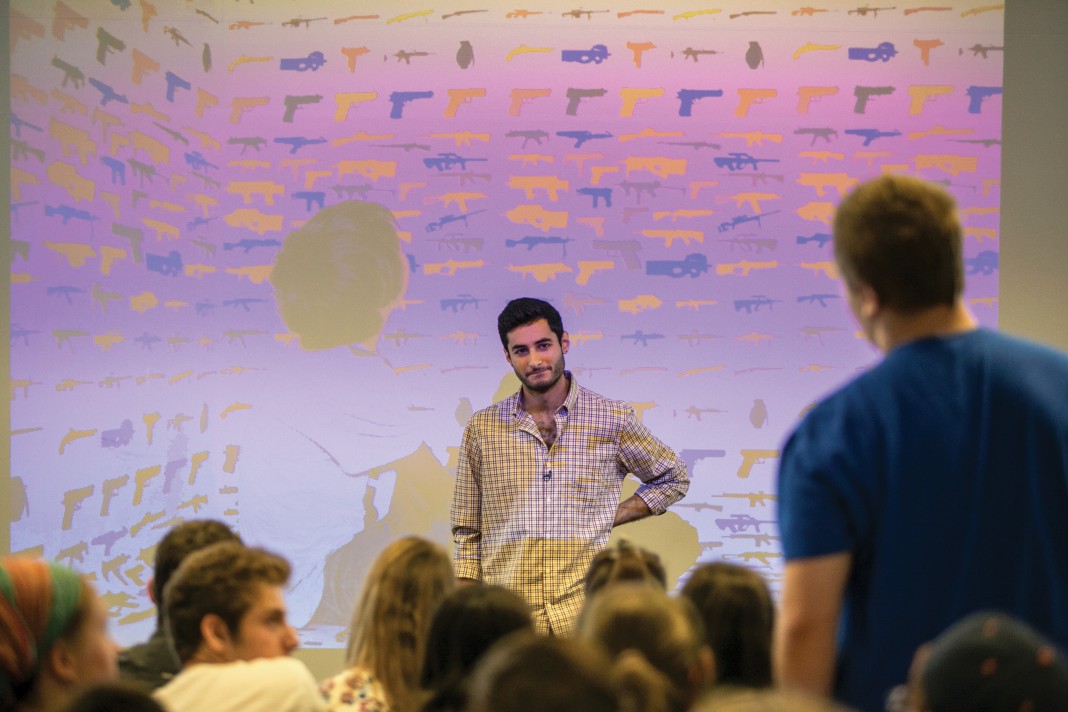 The following article contains a testimony regarding the events of May 23, 2014.

Fourth year sociology and economics double major Siavash “Vash” Zohoori had just finished getting a gyro at now-defunct Pita Pit on May 23, 2014. He’d been unsure if he had heard firecrackers or gunshots coming from the direction of Pardall Rd., so he decided to take a different way home to his dorm in San Rafael Hall.

Then a second year, Zohoori biked down Trigo Rd. to pass by Isla Vista Theater on his way back home. As he paused at the stop sign next to the 7-Eleven, a BMW pulled up across the street. Zohoori remembers the window rolling down and the gunshots echoing in the night, three at a time. He threw down his bike and began running along parked cars on the street, along with two other girls, and witnessed some others fall as a result of gunshot wounds. They entered the 7-Eleven, hatching an escape plan should things go wrong.

In the days following, Zohoori sought support from his family and friends, but his most prolific source of solace came from University of California, Santa Barbara sociology professor Victor Rios. Rios, who had seen his share of violence growing up in Oakland, Calif., empathized with Zohoori, who experienced several nightmares soon after. “Victor was the first person to empathize with me,” Zohoori said. “It was so powerful that we said that we wanted to create a program based on empathy.”

In the weeks, months and years following, Zohoori has begun to cultivate a mental health campaign that aims to change the conversation about mental health. Zohoori currently serves as the undergraduate student adviser for the UC Office of the President Mental Health Oversight Committee, as well as one of two undergraduate students on the Counseling and Psychological Services Advisory Committee. He additionally serves as the Statewide Campaign Coordinator for #HowAreYou, a UC-wide campaign to reform mental health on college campuses. At UCSB, #HowAreYou focuses on improving the services that are already in place on campus, in one-on-one interactions, outreach and diversity.

So far with CAPS, he’s working with the group to get two more therapists available for housing; one each for undergraduate and graduate housing. CAPS is working with the UCSB Academic Senate to place CAPS and CARE in their syllabi, which would be important in reaching out to students. UCSB has just been approved to hire ten new therapists and in the near future will be creating a committee to select qualified applicants, including a candidate interview section for students to facilitate.

What Zohoori is perhaps best known and loved for, however, is his lecture on what it means to be male in today’s society. It covers a culture that glorifies men who are seen with multiple women, the objectification of women and the things men can do not only to help women, but also to help themselves. The focus of his lecture is to get men to think critically about how they treat each other, and how they view themselves — perhaps a rarity when men are conditioned not to show emotion or be empathetic in fear of societal retribution.

“I think Vash has learned to turn personal struggle into social transformation,” said Rios, who has allowed Zohoori to speak during his classes. “He is really trying to impact his generation in making a better world for young men and boys, to improve the way they think about masculinity.”

So far, Zohoori has given the talk to UCSB classes, various Greek life organizations and even a local high school campus, and he plans to expand even further, if high schools and colleges will have him. He begins with a personal recount of his experiences on May 23, 2014 and then ties it to a larger issue with masculinity and interpersonal treatment.

“The oppressions that feminists are trying to fight, or the interpersonal violence with men is a result of the pressures that we feel inside us as men,” Zohoori said. “That doesn’t validate any of the things that are serving them in terms of their oppression, [it just serves as an explanation for why people are doing these things].”

When Zohoori connects with groups of men (for example, in October he sat down with the Interfraternity Council and hundreds of fraternity brothers in Campbell Hall), he aims to go beyond scolding someone for embracing the culture of entitlement that many learn from and play into. He creates a space for vulnerability and honesty, designed to make his audience think more critically about how they act and why they do it.

“We don’t go there and tell them, ‘Don’t sexually assault or do these things,’ we go and see what’s going on and talk about the underlying reason,” he said. “Because when we do that it’s more therapeutic, and you’re not forcing them into anything. You’re changing the train tracks a little bit so they can talk about it.”

For more of Zohoori’s work, visit his blog at http://www.vash.me. If you are interested in working with him to better the mental health environment, whether on a local or national level, contact him at (408) 204-4010.