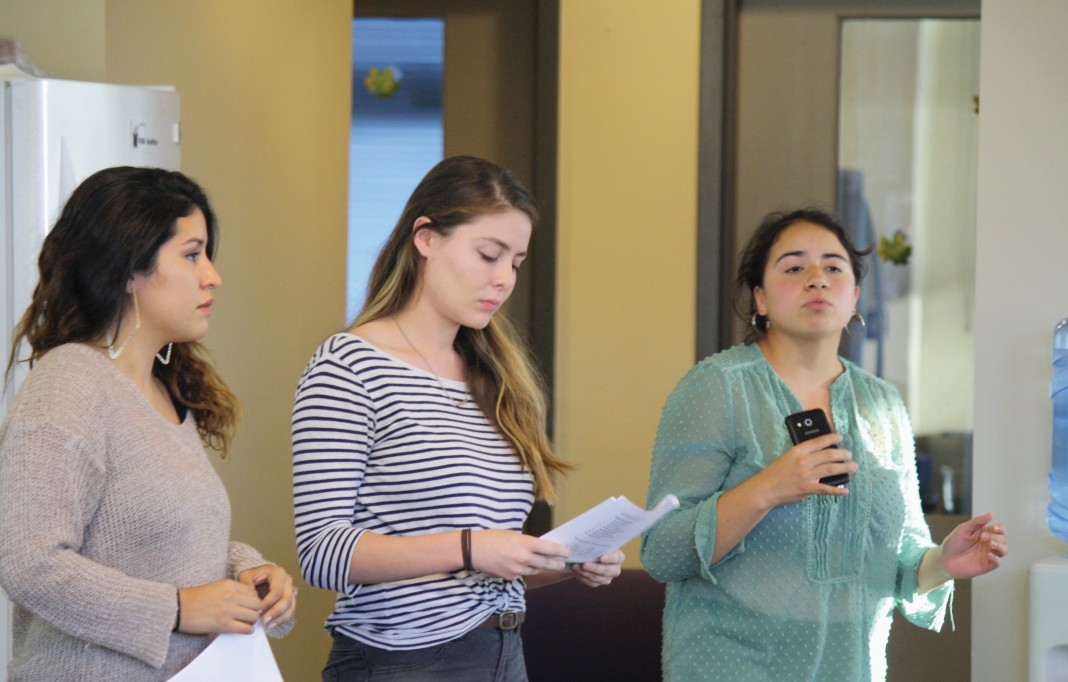 Students, faculty and staff gathered in the Graduate Student Association Lounge on Oct. 19 for an open forum entitled Sexual Violence and the UC. Representatives from Student Affairs, Campus Advocacy, Resources and Education (CARE) and Now UC SB joined the audience to go over and suggest feedback on current statewide policy regarding sexual assault on campus.

California aims to be a leader in creating and rewriting effective sexual assault policy. The UC Office of the President (UCOP) is currently working on reforming the system’s sexual assault and violence policy, including clarification of the definition of consent and assurance of financial and housing options for survivors, regardless of if they have reported their perpetrators. Five UC campuses are currently under investigation for Title IX violations, including Berkeley, Davis, Los Angeles, San Francisco and Santa Cruz.

Led by undergraduate students Ashley Morgan, Alejandra Melgoza and Gema Hernandez Nava, and graduate student Timothy Irvine, the forum presented the draft policy sent out to all of the UC campuses, pointed out its strengths and weaknesses, and provided potential revisions for said policy. An open document exists with all the criticisms of the Now UC SB team on how the current draft of the policy can and should be revised, and the team welcomes input from members of the community.

At the open forum, speakers pointed out some strengths in the newly revised UC policy, and criticized where the UC policy could be more inclusive. Many points, however, such as mandated reporting and the proposed use of a survivor fund, were up for discussion between the participants.

For example, UC employees are mandated to report cases of sexual violence and assault. This includes graduate students (who work in a TA capacity), undergraduate students who receive honoraria and students who are employed in other capacities by the university. This requirement blurs the lines between being a mandated reporter and being a confidant to a survivor of sexual assault, and makes it difficult for a survivor who wishes to keep their assault private to find personal support. While, in theory, mandated reporting should strengthen and hasten judicial sanctions on perpetrators, many shared the ways it could continue to be problematic.

“Another thing that’s not made clear or explicit in this policy is whether the staff members at health centers on campus are mandated reporters,” said Jennifer Selvidge, a graduate student in the Materials Department. “From the sexual harassment training I received here it seems that they are, and if that is part of the UC policy, it is an interesting choice, because many survivors would assume that they have doctor-patient confidentiality … That’s definitely something that I would be interested in looking into for people who just want to go to their doctor and potentially get a sexually transmitted infection test and don’t necessarily want to go to CARE or anything else.”

As for the survivor fund, the University of California, Santa Barbara is the only UC with a fund for sexual assault survivors, intended to cover unexpected, short-term expenses incurred as a result of sexual assault (e.g., medical bills, temporary relocation fees, etc.). In order to receive funds, survivors must have a recommendation from CARE or the Vice Chancellor of Student Affairs. The fund draws its money from Associated Students, which allocates to the fund $10,000 per year, and donations made via the CARE website. However, the fund is not well-publicized and is not implemented at other UCs, which is what those attempting to revise the policy are pushing for.

“I just don’t see why tuition shouldn’t be funded during this layover time, when the administration is not reacting to removing the perpetrator during this interim period between the date an attack occurred versus action by the university,” said Marisa Salinas, a TA and Ph.D. candidate in the Department of Sociology. “I have students who are triggered by recent events in IV and students who are not directly affected, and so you have survivors, who have been directly affected, see their perpetrators across campus. As an instructor, I can’t sit there and keep having my students paying their tuition and coming to my classes, and expect their [work] level to be [high]. I think that there has to be a sort of responsibility that we have to take to at least say, ‘You know what, you’re not responsible for what happened to you.’”

The event follows a series of national and statewide campaigns (UConsent, #ItsOnUs) and student-led protests and informational events beginning with spring quarter’s protest regarding Melgoza’s assault case handling and culminating with last year’s 13-hour sit-in at Cheadle Hall, where survivors of sexual assault made 13 demands of UCSB Chancellor Henry Yang.

Other items up for discussion included whether or not to include minimum sanctions for perpetrators, and how to determine whether or not survivors should report or name their assailants. Feedback from the UCSB community is due Oct. 23, while comments must be submitted to the President’s Task Force on Preventing and Responding to Sexual Violence and Sexual Assault by Oct. 31. The final UCOP policy report will be released in January.

Survivors who wish to receive money form the Sexual Assault Survivor Fund can visit Title IX, CARE or Judicial Affairs, but the official recommendation must come from the Dean of Students’ Office.