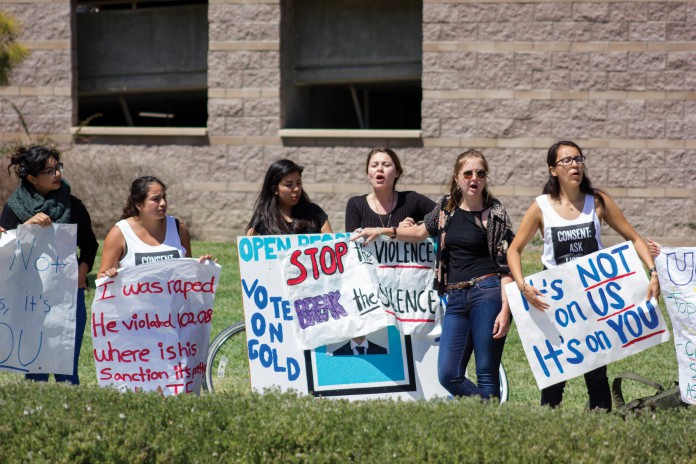 Students from the University of California, Santa Barbara gathered on April 13 on the lawn across from the Student Resource Building to protest Judicial Affairs’s handling of UCSB second-year history of public policy and Chican@ studies double major Alejandra Melgoza’s sexual assault case.

Melgoza’s assailant was suspended for the duration of two quarters—spring and summer of 2015—but is reportedly still on campus, even though he is not concurrently enrolled in any classes.

Melgoza, who was assaulted on Jan. 18, 2014, led the protest with chants such as “Yes means yes, no means no. Break the silence, end the violence,” and “Whose university? Our university. It’s not on us, it’s on you.”

According to Melgoza, Judicial Affairs discouraged her in pursuing her case from the first time she went and spoke to them.

“I went on March 13 [2014], but I was discouraged because they thought that it was just bad sex unfortunately,” Melgoza said. “They said, ‘Maybe there’s not enough evidence. We don’t think that it’s possible and it’s going to be a long and arduous process and so we don’t think you’re going to win.'”

Melgoza, who works in the dining commons, said that one of her first petitions to Judicial Affairs was the removal of her assailant from her dorms and a denial of entry to where Melgoza worked.

“I asked for him to be removed, but they said that would not be possible,” Melgoza said. “They told me that maybe if I could transfer, it would be easier. Also, I wanted them to remove him from where I worked… he would come all the time, especially during the investigation that started in October of 2014. Unfortunately, they said that they couldn’t do that because they said he has to eat as well. Eventually, the negotiation that we settled with was that I would send them my work schedule and they would send it to him.”

The protesters sported signs that read “2 Quarter Suspension Not Enough” and “Survivors Deserve To Continue Their Education Without Fear,” and they were active from 8 AM to 6 PM.

According to Melgoza, the perpetrator left in spring of 2014 because of personal reasons, but returned fall of the same year. His return was what prompted Melgoza to officially file an investigation with Judicial Affairs in Oct. 2014. The investigation ended with the decision of a two-quarter suspension on Feb. 6, 2015.

“[The decision] was supposed to be effective and enforced,” Melgoza said. “Unfortunately it was not properly enforced because my perpetrator is still on campus property.”

Melgoza stated that when the decision came in, she felt it was an unjust sanction and that it was not enough, since she is currently only a second-year in the university.

“I decided I wanted to meet with Vice Chancellor Mary Jacob,” Melgoza said. “I left her a message with her secretary, but she never got back to me. The Vice Chancellor just never got back to me. So then what I did was that I decided to appeal the sanction. I wrote [Chancellor Yang] a letter with a list of demands telling him that I wanted my perpetrator either expelled from campus or suspended from UCSB until I graduated so that I could finish my education.”

Melgoza said that the Chancellor’s response she received on April 1, 2015 did not meet any of her demands.

“He sent me a letter,” Melgoza said. “It was only a paragraph and a sentence long, not acknowledging any of my demands.”

Third-year sociology and communications double major Risa Jensen stated why she believed the protest was important.

“It is important that survivors be allowed to continue their education without fear, and enforcing and improving UCSB’s sexual assault reporting procedures and policy is essential to that,” Jensen said.

Third-year feminist studies and English double major and Co-Chair of UCSB’s organization Take Back The Night, Kelty Kauffman, said that the protest’s aim was to change the way policy is handled.

“Currently, the policies to handle sexual assault cases through Judicial Affairs are not followed,” Kauffman said. “They are not very consistent. Nobody has a very good idea of how or why they work the way they do. The few survivors that come in are treated very poorly and ultimately aren’t convinced to go through any type of proceedings.”

“I decided I need to fight back,” Melgoza said. “I need to stop conforming to all these unjust policies. I know that they don’t serve the students. I’m going to start demanding them to make better policies. That’s why I’m in this protest.”