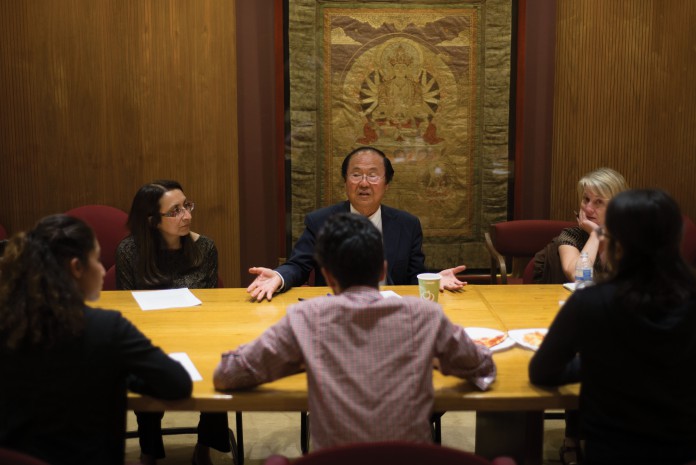 Sexual assault survivors and their supporters left the fifth floor of Cheadle Hall in triumph at almost 3 AM on Thursday, May 14, after a 13-hour sit-in ended with a signed agreement between the three students leading the movement and University of California, Santa Barbara Chancellor Henry Yang.

Second-year history of public policy and Chican@ studies double major Alejandra Melgoza, and fourth-year sociology majors Lexi Weyrick and Melissa Vasquez, organized the sit-in at the chancellor’s office to protest the mishandling of their respective sexual assault cases by the UCSB Office of Judicial Affairs.

Attendance remained fairly stable at around 30 people throughout the demonstration, though many came and went to tend to other obligations. As the afternoon unfolded, Melgoza, Weyrick, and Vasquez prepared a list of 13 specific demands calling for university policy changes and redress for the suffering they have been through following their assaults. In all of their cases approximately a year or longer has passed since each of their assaults.

The protesters, who arrived at the chancellor’s office at 1:15 PM on Wednesday, May 13, refused to leave when staff clocked out after hours. They insisted on speaking with the chancellor about their demands that night, though the chancellor had reportedly been driving to Pasadena, Calif., earlier that day. 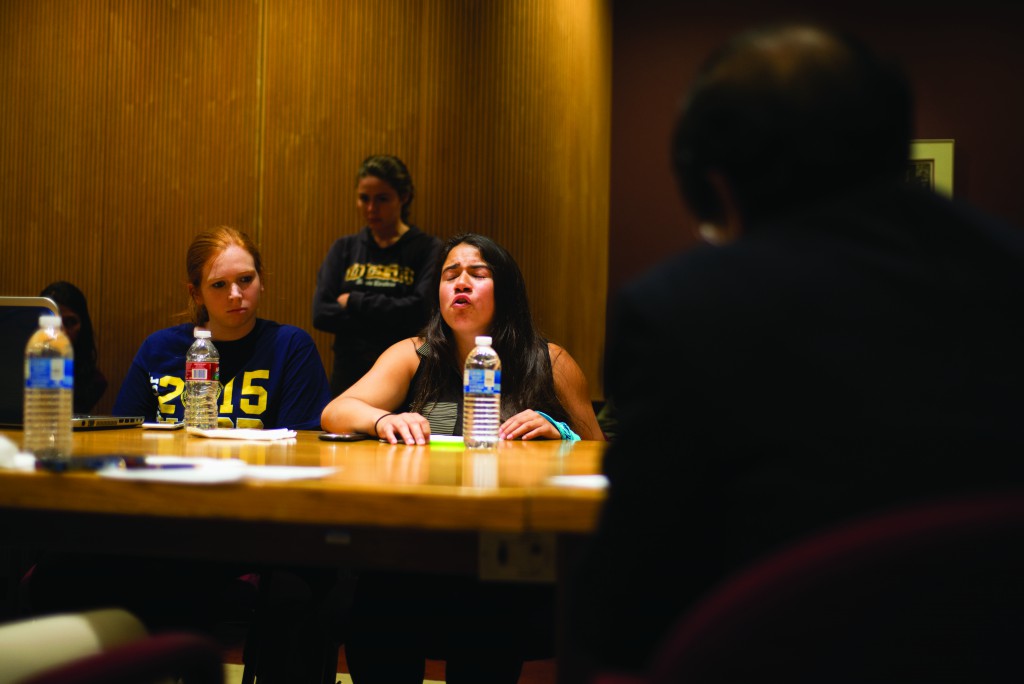 “I will pour my heart out to you, Chancellor Yang,” Melgoza said.

Yang returned to his office at 8:30 PM, the result of negotiations mediated by Associated Students President Ali Guthy over the phone earlier that evening. Yang, Melgoza, Weyrick, Vasquez, AS Executive Director Marisela Marquez, and Chican@ Studies Department Chair Denise Segura then assembled into a conference room down the hall to begin discussion. The walls were lined and the room overflowed with advocates from the sit-in and other supporters intent on listening.

“I will pour my heart out to you, Chancellor Yang,” Melgoza said.

Melgoza’s assault occurred in January 2014, though she did not first visit Judicial Affairs until March 2014. At that point, she says staff members dissuaded her from reporting the assault, chalking it up to “bad sex” that may simply not have satisfied her. Melgoza was shocked to see her trauma so belittled.

“Coming from my cultural background as a Latina, losing my virginity to my assault was the most horrible thing that could have happened to me,” she said. “I thought my value as a woman was completely gone.”

Though her assailant left school the following 2014 spring quarter for personal reasons, he returned in the fall, compelling Melgoza to act. The Judicial Affairs proceedings began in December 2014 and lasted about four months, during which time Melgoza recalls seeing her assailant around campus often, including at her workplace, Carrillo Dining Commons.

Ultimately, Judicial Affairs awarded a two-quarter suspension, a punishment Melgoza feels is insufficient and which she has since made many attempts to appeal, including through a letter to the chancellor. However, she was content to know that she would no longer see her assailant on campus during the 2015 spring quarter; until, that is, three friends reported that they had seen him on campus on three separate occasions. Upon reporting the sightings to Judicial Affairs, the office’s only response was to give her assailant a warning call.

“Going home is not an option for me,” she said. “I have to get my diploma and I have to graduate because I have nothing out there waiting for me. Providing for my family is my first priority, and [I do] that by getting my diploma. So my only chance of succeeding is if my perpetrator is no longer on campus.”

In response to these grievances, Yang and administrators have agreed to pursue suspension for Melgoza’s assailant until her graduation from UCSB. They have furthermore promised to amend the UCSB student code of conduct to specify a minimum required sentence for those found responsible for student code violations. Yang says he will push for a four-quarter minimum for sexual assault. Officials will also explore the possibility of immediate suspension of the survivors’ assailants, effective for the remainder of the 2015 spring quarter. 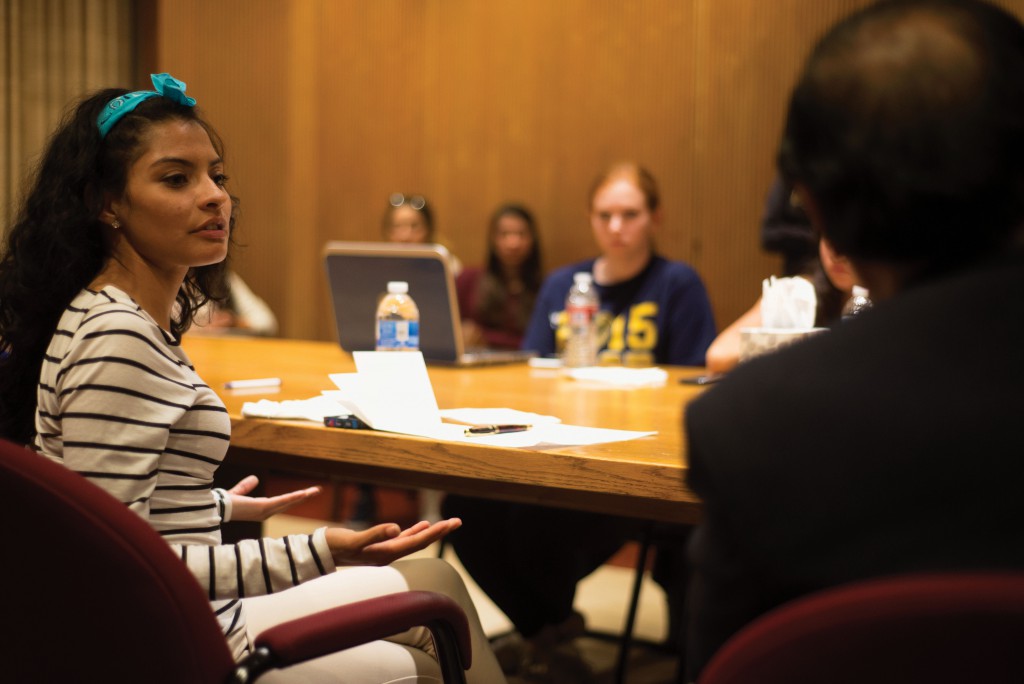 “These aren’t issues that we need to be constantly tapping your shoulders about. Once this is on your desk, this is your concern. It’s the safety of a student. What if my perpetrator would have killed me this year? What then?”

Vasquez shared her story next, a brutal account in which police found her partly strangled with a bloody nose, inside her university-owned apartment last spring. When her parents came to pick her up from her first year of UCSB as a transfer student, they were met with a much more bruised and swollen version of their daughter.

“It’s not fair that someone who did that to someone they ‘love’ will be allowed to leave this university with value to their life, while taking value from someone else’s life,” Vazquez said of her assailant.

Vasquez’s assailant, who was arrested by UCPD the same night of the assault, received a one-quarter suspension as his sentence. Like Melgoza, Vasquez sent an appeal letter to Yang, an effort that reflects the futility she perceives in all her dealings with the administration.

“It’s very absurd that we have to be fighting for our rights for this long,” said Vasquez. “These aren’t issues that we need to be constantly tapping your shoulders about. Once this is on your desk, this is your concern. It’s the safety of a student. What if my perpetrator would have killed me this year? What then?”

Per another of the group’s demands, Yang and administrators will facilitate discussion with the Isla Vista Foot Patrol about issues such as hiring more female staff and implementing cultural sensitivity training. Furthermore, the UC Police Department will explore options for “safe spaces” for survivors, to be constructed during events such as Deltopia and Extravaganza. The university will also pursue a formal investigation of the Office of Judicial Affairs.

Weyrick was the final survivor to share her experience. Her assault occurred during Halloween 2013, shortly after she had begun a “friends-with-benefits” relationship with a friend. On Halloween, Weyrick became intoxicated to the point of blackout. The following day, she learned that she had unwittingly had sex with the friend, which unsettled her a great deal.

“I don’t know if anyone has ever experienced being told that you had an intimate experience with someone and not knowing it,” Weyrick said, “but it’s incredibly violating. And I sat on it because I didn’t want to spend my only two years at this university dealing with sanctions, dealing with policies, dealing with reporting it… but I couldn’t sit on it any longer.”

Because she decided to report later, Weyrick fell prey to the 12-month statute of limitations for filing claims under Title IX. Additionally, at the time the assault occurred, sexual assault was classified as harassment under Title IX, making it unclear what sanctions are appropriate. She may not see sanctions for her assailant before they both graduate, but she is committed to the cause nonetheless.

“This is a really great opportunity that we’re giving you right now to be a leader on sexual assault on campus,” Weyrick said to Yang. “Instead of reacting to us and trying to deal with us as if we’re a problem, I feel like this is a great opportunity for you to actually listen to the students who you care about and who you represent.”

Per their demands, the three women will receive compensation as part of a Survivor Fund for school and living expenses, and the university has been tasked with finding a permanent funding source to sustain it in the long term. Each woman has also been granted a prepaid plane ticket to Sacramento so they can bring their advocacy to the UC Regents.

Officials responded receptively to the idea of enhanced sensitivity training. Staff training programs that are already in place to combat rape culture will be expanded to include student employees. Additionally, the university will ask the Academic Senate to implement cultural sensitivity training for UCSB faculty and staff.

Furthermore, the administration has agreed to the public distribution of quarterly statistics about sexual assault on campus. Student Affairs will explore funding for the hiring of new CARE staff, and a half-time advocate will reportedly begin working at the county-owned IV Clinic building over the summer. Overall, the three leading survivors saw unprecedented success in administrative response to the demands.

Once the three women announced their triumphs to other sit-in participants, the already lively scene got a second wind. Cheers and tears in equal measure flooded the room with joy.

“I’ve been dreaming of this night for so long,” Melgoza said, “so to have it realized is unbelievable.”