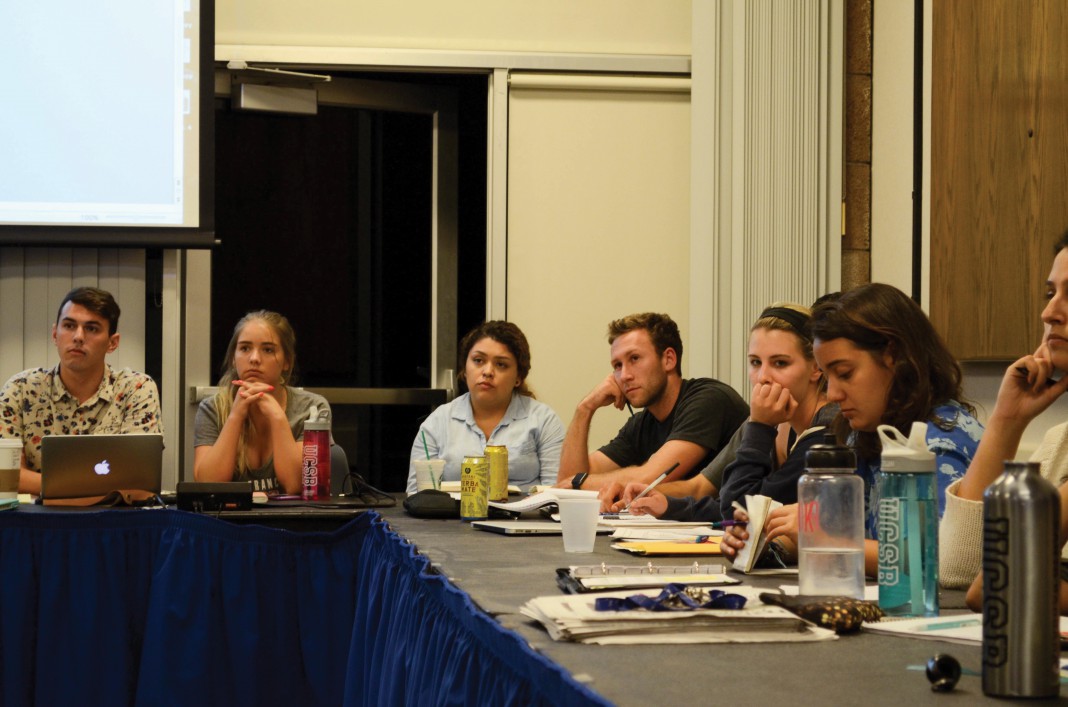 Currently, student councils for the two smaller colleges are registered campus organizations under the Office of Student Life. However, these student councils are not sponsored by AS and therefore do not currently receive funding, as mandated by the bill. According to Larrazolo, the senate liaison to CCS, the CCS student council does not exist, and the CoE student council only fundraised for t-shirts during the duration of its existence.

Two CCS students attended public forum in support of Larrazolo’s bill. “CCS is not well-understood by the campus, and there’s a lot that CCS does for the campus,” said third-year CCS physics major Tyler Postle. “There’s a lot of disconnect between CCS and the main campus, and so we really want to work and use funding to both fund research that will benefit the campus just as we have been before and also to host social events that can integrate the majors within CCS […], and to kind of let the college, the UCSB campus, know as a whole what we’re about.”

Postle also believes that it would be important to streamline funding for the purpose of hosting social events. It aims to inform the rest of campus on what CCS students are up to, while maintaining autonomy. So far, the push has garnered a lot of support from CCS students and faculty alike.

However, some opposed the creation of such student councils. Fourth-year political science major and former Off-Campus Senator Brandon Lee spoke in response to the introduction of the bill at public forum. He questioned why senators want to create more bureaucracy during a time when government has been restructured to streamline the process of serving students, and ambiguity remains regarding the status of various AS entities.

“In so doing, we would also have to stipulate which, if I read it correctly, and I’m sorry if I didn’t, an enormous financial amount per group that would arbitrarily be created,” Lee said. “I think that could potentially set some sort of precedence to trigger an ulterior motive.”

Lee clarified his statements in an interview with The Bottom Line, in which he expressed concern over where the funding was coming from and the language used in crafting the bill. “I admit I was not as caught up to date or sensitive to the needs of CCS,” Lee said. “I also thought that members would be requesting and arbitrarily awarding it based on needs of council. I also realized that my tone came across as persecutory as opposed to being genuinely questioning and skeptical.”

Should the bill be passed, students from any college would be allowed to attend open forum student council meetings, and so long as they attended at least one meeting, would be allowed to request funding for independent projects. At the moment, the bill has been sent to the Committee on Campus Affairs.

Last week’s bills regarding an update of elections code have been sent to the Campus Affairs Committee. Elections committee wishes to meet to discuss the ongoing elections code reform. To accompany the five bills at committee, Off-Campus Senator Mika Kawakami authored A Bill to Create a Self-Care Portion for the Declaration of Candidacy Meeting, which aims to educate AS candidates during election season on self-care for stressful times. The plan would incorporate a 15-30 minute presentation by UCSB health educators during the declaration of candidacy meeting.

“There have been instances in the past election of party leadership being insensitive to the needs of candidates and campaign managers, and disregarding their mental health needs,” wrote Kawakami in the bill. “Associated Students must ensure that students who are running in an election do not feel victimized or are subject to any treatment that puts their mental health and academic achievement in jeopardy.”

The bill was sent to the Committee on Campus Affairs and will be discussed and voted upon in an upcoming meeting.