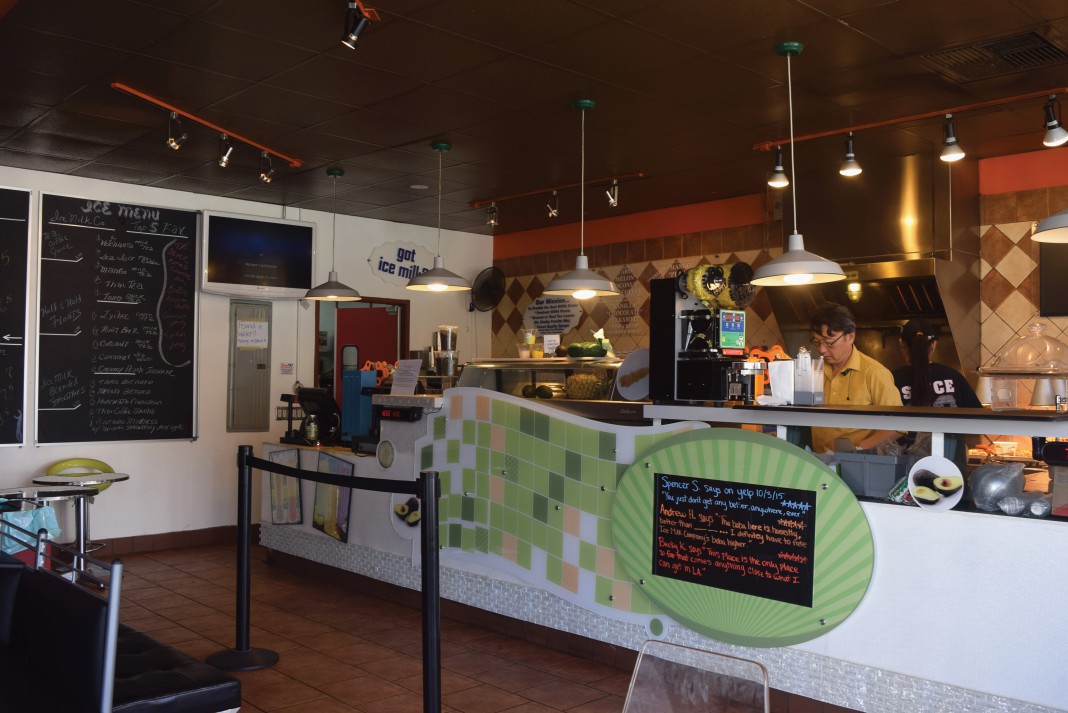 Ever since Pita Pit closed down, there have been rumors about who would take over that building. One rumor that especially caught my attention was that the boba shop in Albertson’s would be moving over to Isla Vista. I was more than ecstatic to walk by the building and find that it was inhabited by Ice Milk Company (also known as Fire and Ice).

My photographer, Candice, and I ventured out to explore this curious, new restaurant.

The inside’s main feature is the boba bar, where your orders are taken and made. Behind the bar is a grill where they charbroil chicken and a large wok full of oil for deep frying. Around the bar are pink salt blocks, which give the business a unique touch. Along the wall next to the register are the “Fire” (food) and “Ice” (drink) menus. It’s written in chalk, so the menus are subject to change every once in a while.

One thing the owner prides himself in is using real ingredients. His face lit up as he proudly told us that they don’t use any powder mixes or fruit flavorings for tea and drinks.

In fact, he says their philosophy can be found on the white sign wedged between a cup holding milk tea powder and another cup holding tea leaves. Part of it reads: “We brew all our teas every day using real tea leaves. If you like your tea stronger or sweeter, just request us. We will do our BEST to meet everyone’s unique taste.”

If you’re unhappy with the flavor, the sign sassily adds, “If you are used to the imitation milk tea boba, please let us know. We can use fake milk tea mix to make your drink.”

The difference is crystal clear in the flavor. I had previously tried the Thai tea with boba, an absolute classic drink that’s helpful in judging boba shops. I was pleasantly surprised by the tea because it actually did taste like tea. This wasn’t the overly sweet, unnaturally orange, chemical tasting Thai tea. It was less sweet and slightly bitter in taste, which fit my personal tastes. The boba itself was cooked to perfection. It wasn’t sweet because it was freshly made and didn’t spend tons of time soaking in a syrup mixture. It was chewy and had that little bounce to it.

This time, I ordered the peach jasmine milk tea float. It contains jasmine milk tea, peach syrup, a scoop of ice cream and boba. The drink was pure bliss; the ice cream added the perfect touch with a new element of creaminess. With each sip I was immediately greeted with peach flavor followed by the creaminess from the ice cream. The jasmine milk tea creeps up like an afterthought, adding a layer of sophistication. The peach became slightly overpowering after a while and the sweetness built up.

Candice ordered the mango milk tea and noted the strong natural tea flavor. She described her drink as more of a mango tea due to the overwhelming mango flavor. She felt like hers wasn’t too milky, but she didn’t mind all that much. She was impressed by the lack of color in her drink. A lot of places use artificial colors to make the color of the drink match the fruit. Both of our teas were a pale brown color — a great indication of the lack of artificial colors.

If you’re familiar with making your own boba, you can tell this boba is the real deal. It may not be sweet at times, but that’s because the boba is made mostly of tapioca starch. I left my boba to sit in the fridge thinking it would be okay for later. To my dismay, I was left with hard little lumps of coal. Natural boba does this; boba that is sweet when boiled in water or soggy after being refrigerated is full of artificial sweeteners and preservatives.

We shared the super trio combo, as I felt it gave the most variety at once. It came with the shake-and-go charbroiled chicken over rice, four potstickers and one BBQ chicken bun.

One fun thing about the chicken bowl is that it’s served in a large boba cup. If you’re on the go, they seal it the same way they seal boba: with an airtight heat-sealed lid. The bowl came with chicken, crispy wonton noodle strips, and rice. The chicken really packed a punch; it was clearly marinated in teriyaki flavor for a few hours rather than just submerged in sauce. There were charred bits which gave the chicken a whole new definition of flavor. In fact, the chicken is cooked over a grill right next to the boba station, and you can watch as they take the piping hot chicken off the grill and chop it on large pink salt blocks.

The dumplings were more like potstickers since they were deep fried instead of steamed, resulting in a crispy outside. I highly recommend eating the potstickers with the ponzu sauce found on the condiment bar. The bar also features sriracha, soy sauce, and sriracha mayo.

Overall, I’m happy with my experience here. Because they’re relatively new, they’re still experimenting with things (like the frozen yogurt bowls). You can visit Ice Milk Company at 971 Embarcadero Del Mar. Be aware of their hours before you go because their opening and closing hours vary. You can be sure, however, that they are open until 2 AM Thur. – Sat.

Why Are Book-To-Film Adaptations Always So Bad?