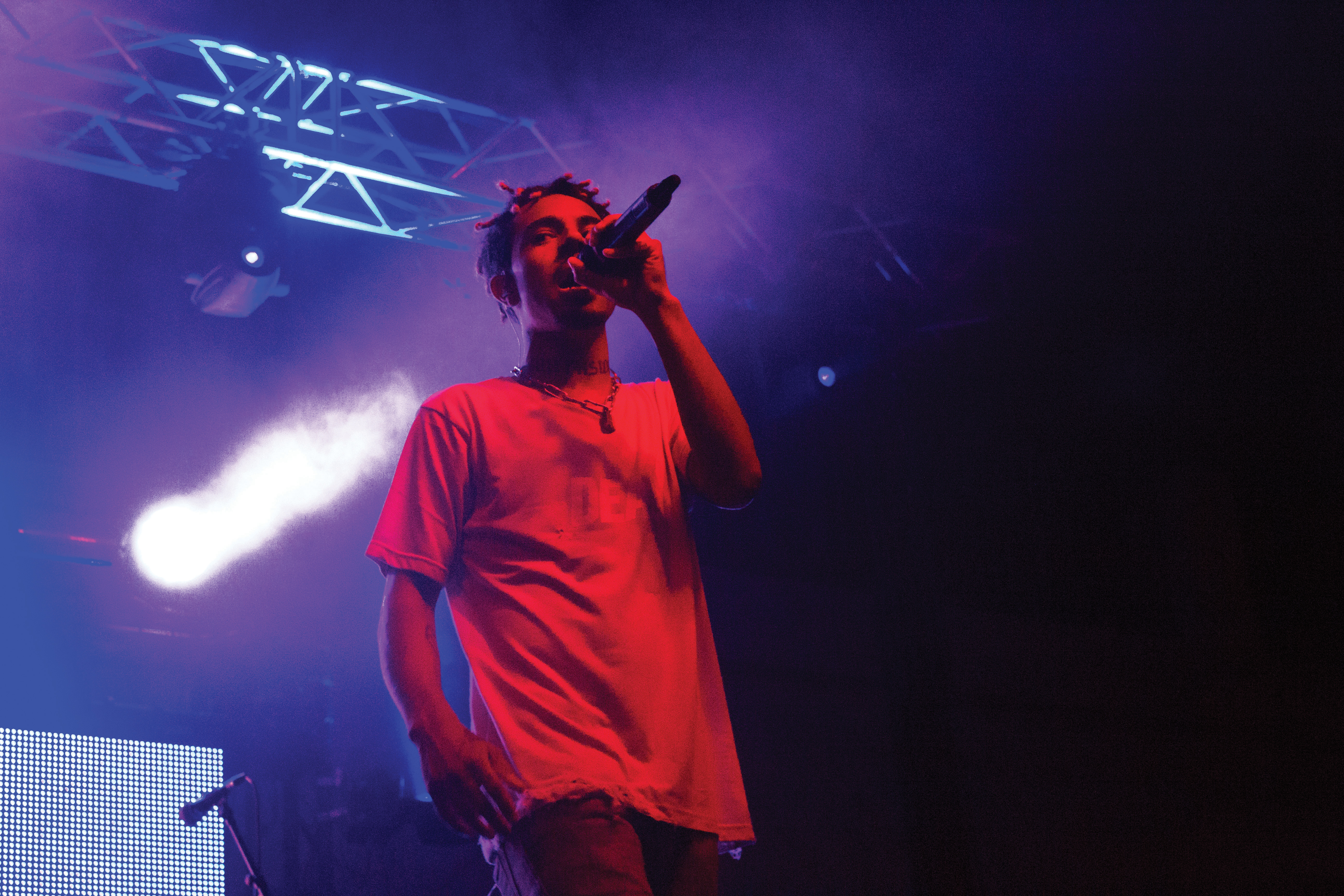 Legions of energetic University of California, Santa Barbara students crammed the sidewalk leading up to Storke Plaza last Saturday for Associated Students Program Board’s annual Welcome Back Concert. Headlining thing year’s rendition of the famously banger-heavy concert series was Chicago rapper Vic Mensa, the first non-electronic music headliner since Big Sean played in 2011. For many first years, the Welcome Back Concert serves as an introduction to the type of music they will hear blasting out of the ocean-side subwoofers and heavily crowded backyards of Isla Vista for the next four years.

That being said, it wouldn’t be Welcome Back without a solid dose of electronica, provided this year by Ashkan Karimloo, better known by his stage name Kuro, a DJ based out of Los Angeles. Karimloo is a recent UCSB graduate, and got his start as an artist playing parties around IV, providing a direct flavor of UCSB’s party culture. His set ranged from bouncy house music to trap, with cymbals so rapid they sounded like shuffling cards, balancing heavy, down-and-dirty bangers with rich, immersive chords that made his show as awe-inspiring as it was danceable. Among the tracks he played were remixed versions of Kendrick Lamar, trap duo TNGHT, A$AP Ferg, and Diplo.

Soon though, it was time to hand over the mic to man-of-the-hour Vic Mensa, born Victor Mensah, who rapped in front of an LED screen with bouncing enthusiasm. Backed by both a DJ and a multi-instrumentalist, who switched between a drum machine and an electric bass, Mensa ran through a collection of recent singles and songs off his mixtape INNANETAPE. INNANETAPE’s lyrical content and varied production, ranging from house to boom-bap, along with a little help from big names like childhood friend Chance the Rapper, Boi 1da, and Ab-Soul, helped propel Mensa to mainstream and critical acceptance in one fell swoop. Further aiding his rise to stardom are features from Kanye West and a newly signed contract with Jay Z’s lucrative Roc Nation label.

Despite a few moments where Mensa let a prerecorded backtrack do the rapping for him, his set was electric. Some highlights were his newly unveiled, Skrillex-produced track “No Chill,” where Mensa led the crowd in a braggadocios chant of “Practice? What the fuck is practice?” in an ode to his persistent work ethic and recent success. “Orange Soda,” a psychedelic tribute to weed and Kenan and Kel off of INNANETAPE, was performed in front a screen of synaesthetically orange static, with Vensa lending his sweet singing voice to the mix. Mensa’s music took a socially conscious turn on “Time is Money,” rapping about political corruption, the unpredictable violence of Chicago’s South Side, and the self-destructive drug culture many of his old friends have fallen into. He also played a cheerful cover of Chance the Rapper’s “Cocoa Butter Kisses,” Chance being a childhood friend, in front of the disturbing image of a cigarette burnt to the filter until it was a sagging cylinder of ash.

Mensa concluded the show with his clubby new banger “U Mad,” a chorus of marching trap horns and wall-shaking bass, heralding in a musical direction radically different from his previous tapes. This new party-oriented style made him a fitting headliner for this year’s memorable Welcome Back Concert and an awesome first act in ASPB’s lineup of shows for the 2015-2016 school year.