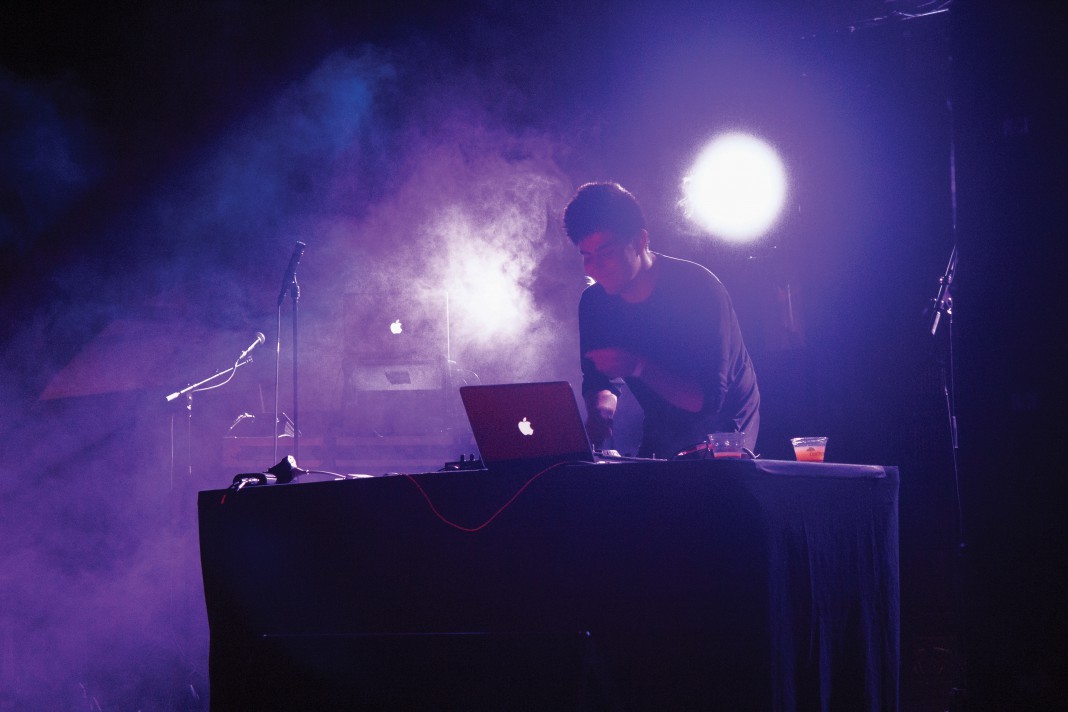 Hip-hop influenced electronica artist Kuro is no stranger to Isla Vista. In fact, after spending the past two years refining his sound in our crowded backyards and beachside parks, you could say he has become an integral part of the city’s culture, contributing heavily to IV’s vibrant electronic music scene. Many of you probably know him as Ashkan Karimloo, a fellow Gaucho and film and media studies and sociology double major who graduated this past May. Lucky for us, he decided to stop by his alma mater last Saturday to open for Vic Mensa at AS Program Board’s annual Welcome Back Concert. Before the show, I sat down with him at Pizza My Heart to talk musical heroes, gear, and what he has coming at us next.

How do you find inspiration for your music?

I kind of just gain it from my influences, and I’ve had an idea of what I’ve wanted to do for years that’s adapted over time with my environment. So like, when I came to SB I changed a little bit and adapted to the Santa Barbara lifestyle, played a bunch of parties, stuff like that. Starting school here I loved playing parties around here, playing music my friends really liked, seeing if other people liked it, and seeing word spread from there. Watching my audience grow little by little, that’s been awesome.

Then there’s the validation you get once you start getting booked for shows. Say you play a show and you know it goes well, or you feel like it goes well, and then the same people call you back like the next week to see if you want to come back and play another show, that sort of thing. It gives you a certain sense of validation that makes it seem like something you want to pursue.

Who are your musical influences?

It varies. Back in high school, I listened to a lot of J Dilla, Tribe Called Quest, stuff like that, but when I came up here things changed a little bit, and I started listening to a lot of electronica. Purely based on the Santa Barbara lifestyle my main influence as a DJ was Diplo because it like perfectly matches [the environment]. Now I’ve gotten past that a little bit, and I’ve been listening to a lot of ballroom and vogue music coming from New York, the UK, and places like that. Like Night Slugs is a record label that I listen to a lot.

Now that I’m located back in LA I’ve started to go back to more underground roots, and that’s been cool, but every time I come back here I realize I’ve found a mixture of two styles: underground music and music that kids here are going to like. I kind of fill a void in between the two, and I feel like that’s led to success down here, because it’s different than everyone else, but still something everyone can relate to.

Were you influenced at all by the LA Beat Scene growing up? I listened to ‘Thank You’ on your SoundCloud, and I heard a lot of sounds similar to music from Beat producers.

As soon as I turned 18, I started going to Low End Theory. Back when I was 15, 14 years old, like a sophomore in high school, I first heard FlyLo, Tokimonsta, Samiyam, and all them, like early Brainfeeder stuff. I thought it was really cool, like a good mixture, since I was already into a lot of old school hip hop like Jay Z and all of that, like not super old school, but that kind of hip-hop, and the Beat Scene didn’t go that far away from that.

A lot of aspects from the Beat Scene just got integrated into more popular music too, y’know? I remember back in like the summer of 2012 you would hear “Harlem Shake” and songs like that at Low End Theory, and Low End Theory’s supposed to be like king of the underground. Over time [Harlem Shake] exploded on its own and became what everyone listens to now, so it’s kind of crazy. You kind of see these stages of growth for sounds.

Who are some artists you’ve enjoyed working or collaborating with?

I haven’t collaborated with anyone yet, but I’ve been really lucky to play with a lot of my influences, at least recently. Earlier this summer I played a show with Falcons and Prom Night, two people from LA I’ve been following for years. Actually the first time I ever went to Low End, Falcons was playing there, and to not just play with them but kick it with them, like we were all at an after-party later just hanging out, shooting the shit, just getting to know all these people has been really cool.

Who else…I remember Snakehips last year at the Goodland Hotel, they were really cool to play with. We ended up going back to back, because they had some malfunctioning with their mixer, so they ended running their stuff through my computer and my mixer. It ended up being like they would choose a track and I would lay it, that sort of thing. So it was a really cool experience, because I was a really big Snakehips fan at that point, and to not just play with them but to actually be a part of [their set] was really dope. It makes it all worth, just being able to play with your heroes.

Actually towards the end of the year, now that I’m working in LA, I got an internship with Salva, who’s a popular DJ/producer, and he’s someone I really molded my style off of back when I started, so getting to meet with him personally on a regular basis, hanging out with him, and actually working with him was awesome. The internship actually turned into more of a professional relationship and now we’re going to start throwing shows in LA, so that’s been cool. It’s also been a way to keep playing and doing cool stuff, y’know, and that’s going to be really underground in LA, so that’s going to be awesome. Exactly the type of vibe that I’m going for.

What equipment do you use to play your music?

Right now I’m running it all through a Traktor S4. I started off with a dead on MIDI controller, and then eventually that stopped working, I mean like the hardware actually stopped working, so I got the S4. I’m looking to move on to CDJs as soon as possible, but I need to invest in that, y’know, and the whole setup’s going to be close to a grand if not more, so right now I’m using an S4.

How many of the sounds in your songs are sampled vs. created on your own?

Well I haven’t started producing yet, that’s another thing. Before I start producing, because I know people who are just using Ableton, FruityLoops, Logic, who are doing it straight off their computer with no hardware, I really want to get to a position where I have the hardware to make some really cool stuff, instead of releasing stuff that I know could be better.

So a lot of that is just building the cash flow and getting all of the equipment that I need, and once I have all of the equipment and feel comfortable with it then I can start releasing my own stuff. It’s all about timing I realize. I got to a point where I was about to start putting stuff out, but I realized I didn’t want to put something out unless it was something I could really, really get behind, y’know? So that made me decide to wait it out a little.

What genre would you say your music is?

Electronica foremost. Hip-hop influenced. To get specific, it’s more future-based music, mixed with a lot of ballroom vogue-type music, with a little bit of dancehall rhythm. Mixed with hip-hop, always.

Do you think your music becomes a different genre when you play live, or is that just the live genre of the music that you record?

What inspired you to start DJing?

I started DJing when I was a sophomore in college, I would say around December 2012 or January 2013. I’d wanted to get into it ever since high school, but again I needed the equipment. I got really lucky because my roommate is the one who actually invested on my first mixing set, and if he didn’t do that I wouldn’t have started anything. A lot of it has relied on cash flow, and before I came to college I didn’t come from that much, I didn’t have money to just buy all the equipment I wanted to have.

So I really owe a lot to my roommate for getting my feet wet. From there I started making money from playing shows, so it’s all kind of worked itself out. I was always really motivated to do it, I was just waiting for the opportunity to start. IV’s also a really good environment for DJing, because as soon as you start playing you have a built-in audience, so you can try things out and see what works.

Should we be looking forward to any new projects soon?

Yes. A lot. I’m going to be in LA throwing shows. Look up Moony Habits, I’ve been throwing shows there for the past few months. We’re going to keep going with a monthly concert series in LA. Throwing shows with Pacemaker, Salva, the Future, and I’m going to start releasing stuff very soon, in the next couple months. There’s plenty of things to look forward to.

How do you like to get ready for a show?

Hanging out, having a good time, laughing with friends, keeping the good energy up, because if I go up there on stage and I’m in a bad mood then you could actually kind of see it and hear it. So I tend to hang out, get some good food, some good drinks, have a good time, but not in an irresponsible way, but literally just crack jokes, laugh, smile. So once I get up there I can translate that into the crowd, and make sure everyone there has a good time.