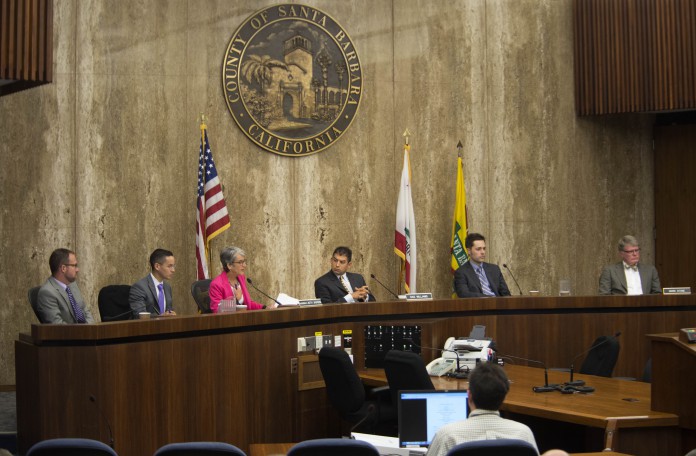 Several parties involved in the cause, response, and clean up of the Refugio Oil Spill in May were subject to questioning by state lawmakers on Friday, June 26 in a joint oversight hearing. The event was spearheaded by State Sen. Hannah-Beth Jackson, who chairs the Senate Select Committee on the Refugio Oil Spill, and State Assemb. Das Williams, who chairs the state Assembly Natural Resources Committee. The hearing focused on examining the cause, response, and impact of the spill.

The board hearing room in the County Administration Building was filled to capacity and many stayed standing in the back and side aisles. The room grew warm and slightly humid as the hearing continued longer than anticipated. Though the hearing did not result in any concrete legislative action, it allowed for Democratic lawmakers to get answers to questions regarding Plains’s knowledge about the condition of the  pipeline and when it burst.

Director of Safety and Security for Plains All American Pipeline Patrick Hodgins provided the key testimony of the hearing. While polite and cooperative, Hodgins still managed to frustrate the panel of lawmakers. He claimed to be unable to answer some key questions because his answers depended on the results of a federal investigation into the oil spill.

Plains employees remotely shut down the pipeline at around 11:30 AM on the day of the spill, after noticing pressure irregularities in the pipeline. Plains did not notify the National Response Center until approximately 2:56 PM, after having identified the origin of the spill at approximately 1:30 PM. Local county agencies, including the Santa Barbara County Fire Department and Sheriff’s Office, had already contacted emergency services long before Plains did.

Hodgins insisted that the lapse in response time was due to the need to identify the source of the spill beforehand. “Aren’t you a little embarrassed […] ?” asked Williams regarding the fact that the county fire department was the first to notify emergency personnel about the spill and not Plains. Hodgins simply replied that Plains “deeply regret[s] what happened here.”

According to documents released last week, Plains employees in Bakersfield — who were responsible for contacting federal emergency services — had trouble contacting employees on the ground near the site of the spill.

In his testimony, Mark Ghilarducci, director of the Governor’s Office of Emergency Services, cited a state law that requires companies to report incidents like these within 30 minutes. “They did not meet that criteria,” he said, when Williams asked whether he believed Plains had observed the law.

Hodgins provided similar answers when asked about the advanced levels of corrosion found in the ruptured section of the pipeline. Hodgins stated that Plains saw no reason or indication to assume that there had been such corrosion. “The first time I heard anything about corrosion was when I read the newspaper,” he said, even stating that he was “shocked” when he heard about the measurements.

Jackson questioned Hodgins about a 2012 Plains investigation into the quality of their own pipeline, as well as the reports that emerged in the aftermath of the spill indicating that the pipeline had corroded to unsafe levels. Hodgins replied that the results of the investigation were in the possession of federal investigators with the Pipeline and Hazardous Materials Safety Administration, and that he could not comment in detail about the state of the pipeline until the results of the federal investigation came in.

When asked why Plains had remotely shut down the pipeline from their facility in Texas instead of using an automatic shutoff system, Hodgins stated that the use of that technology was not required by federal law, and that Plains’s system met the industry standard.

Dianne Black, Assistant Director of the county’s Planning and Development Department, stated in her testimony that nearly every major pipeline operator in the county used automatic shutoff systems in their pipes, except for Plains. Black concluded that if Plains had equipped their pipes with said system, it would have cost less than they have spent so far on clean up efforts for the spill.

As of June 27, Plains All American Pipeline had spent an estimated $96 million on cleanup efforts.