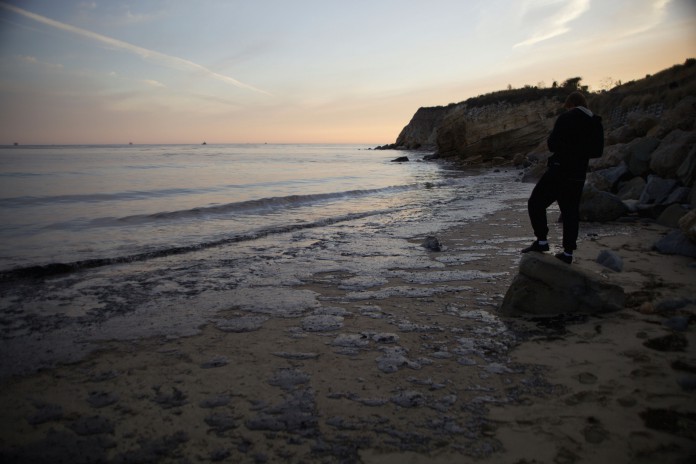 An oil pipeline ruptured and sent thousands of gallons of crude flowing toward the ocean at Refugio State Beach on May 19, roughly 14 miles north of the University of California, Santa Barbara campus. The spill created an oil slick stretching nine miles along the pristine coastline, endangering wildlife and closing down beaches as they became covered with crude. Cleanup efforts continue as officials try to skim the ocean for oil, remove crude from soiled beaches, rescue affected wildlife, and find the cause of the spill.

While the leak has now been contained, the rupture sent an estimated 105,000 gallons of oil spilling from the broken underground pipeline, roughly 21,000 of which ended up in the ocean, about one-fifth of the total oil spilled. The pipeline in question was installed over two decades ago and has been owned and maintained by Texas-based Plains All American Pipeline, which claims that the ruptured pipeline had its last inspection a few weeks prior to the spill.

Plains All American Pipeline has had a history of federal safety violations, The Los Angeles Times reports. Based on an analysis of data from the Pipeline and Hazardous Materials Safety Administration, Plains has had 175 safety and maintenance infractions since 2006.

“Plains’ rate of incidents per mile of pipe is more than three times the national average,” reads the Times piece. “Among more than 1,700 pipeline operators listed in a database maintained by the federal agency, only four companies reported more infractions than Plains Pipeline.”

Greg Armstrong, chairman and CEO of Plains Pipeline, visited the site of the spill the day after the pipeline broke. He stated that the company “deeply regrets” the accident, according to the Associated Press. “We apologize for the damage that it’s done to the wildlife and to the environment,” said Armstrong. He added that Plains Pipeline had received the go-ahead to continue ongoing cleanup operations, and that they “will remain here until everything has been restored to normal.”

Federal authorities launched an investigation into the conditions of the ruptured pipeline, issuing a corrective action order on May 22 against Plains asking them to send a section of the ruptured pipe for testing, conduct a root cause analysis of the spill, and have an outside group review the results of past pipeline integrity tests.

On May 20, Calif. Gov. Jerry Brown declared a state of emergency in Santa Barbara County, allowing more funds for aid and more environmental response units to help with the cleanup efforts.

“This emergency proclamation cuts red tape and helps the state quickly mobilize all available resources,” said Brown. “We will do everything necessary to protect California’s coastline.”

It’s likely to take months before the full extent of the environmental damage becomes clear, but the accident has already been shown to affect local wildlife along the Santa Barbara Channel. The Santa Barbara Channel is a roughly 70-nautical-mile-long and 24-nautical-mile-wide stretch of the Pacific Ocean that separates Santa Barbara and the neighboring coastal cities from the Channel Islands. In addition to being a scenic location and attracting thousands of tourists, the Channel is home to many threatened and endangered species, including blue, fin, and humpback whales, as well as sea otters and sea lions.

As the cleanup efforts continue, cleanup workers and volunteers continue to find more and more wildlife afflicted by the oil. Fish, crustaceans, and even octopi join the list of affected species. Officials say one sea lion, nine pelicans, and an unknown number of fish have died, as of May 25.

The last time a major oil spill occurred in the Channel was the Santa Barbara oil spill of 1969, in which nearly four million gallons of oil spilled into the ocean after an underwater blowout occurred on the ocean floor under Union Oil’s Platform A. It was the single largest offshore oil spill at the time, killing nearly 3,500 birds, as well as dolphins, elephant seals, and sea lions. The 1969 oil spill is widely credited for sparking the modern environmentalism movement.

Federal government orders Plains to clean up spill. On Wed. May 28, the U.S. Coast Guard and the Environmental Protection Agency issued a Clean Water Act order for Plains All American Pipeline to ensure that the company continues to clean and contain the contamination from the oil spill. The order also requires Plains to submit a plan by June 6 that outlines how the company intends to analyze the spill’s impact on the environment.

Pipeline was severely eroded, investigators say. The preliminary findings of an investigation by the Pipeline and Hazardous Materials Safety Administration reveal that the pipeline was “experiencing active external corrosion.” The portion of the pipeline that burst had a metal erosion level of 45 percent. Other portions have lost an estimated two thirds through external metal erosion.

City of Santa Barbara retains high-powered environmental lawyer. As of Wed. July 22, the City had retained the services of nationally known environmental lawyer Scott Summy for a potential lawsuit against Plains All American Pipeline. Summy was a lead litigator that sued BP on behalf of areas affected by the Deepwater Horizon oil spill in 2010.