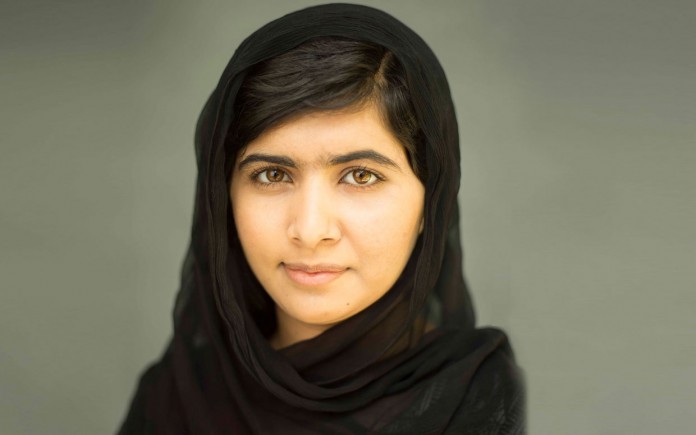 Malala Yousafzai, the 2014 Nobel Peace Laureate, spoke at Arlington Theatre in Santa Barbara on June 27th. The Arts and Lectures event was sponsored by Susan and Craig McCaw, and involved a speech, interview, and Q&A with Malala.

The 15-year-old has achieved worldwide recognition for her unwavering dedication in fighting for girls’ rights to education. Her crusade began when she was just ten years old, in October of 2012, when the Taliban targeted her in a brutal attack for her beliefs. Since her recovery in England, she has established an international fund, named the Malala Fund, and has been honored in countries all over the world. Her book—I Am Malala—is a bestseller, and she is now the subject of a documentary film scheduled to be released Fall 2015. During the event, Malala touched on a myriad of subjects, including missing her homeland, meeting world leaders, and balancing daily life in school with activism.

Malala’s frank and honest analysis of her experiences provided a sense of authenticity and, overwhelmingly, a humanization that resonated. Her speech commenced with a discussion of her abrupt relocation to London, along with the practical and emotional turmoil that followed. Malala grew up in the Swat Valley of northern Pakistan, a place she described as “a paradise.” She recollected how, once she was conscious, she looked out her London hospital ward window and was dismayed to see a dense urban landscape as far as the horizon. She described the trees and rivers and streets of her childhood in her beloved homeland. The move to Birmingham was also an adjustment for her parents and two younger brothers.

A portion of the conversation was focused on her family life, complete with relatable stories that drew both awe and laughter from the audience. Malala did not hesitate to state that her empowerment comes from not having “ordinary parents” that ascribe to conventional roles and limitations for daughters. She described watching her mother become more independent in their new country, and, in one humorous anecdote, recounted how her youngest brother’s reaction to her receiving the Nobel Peace Prize was to caution her that it did not mean she could be bossy.

In her quest to secure the rights of the 66 million girls worldwide who are denied access to education, Malala has not neglected her own schoolwork, and currently attends high school in Birmingham. When asked about the high school dropout rate in the U.S., Malala remarked that American teenagers should keep perspective, and understand they have rights that their peers around the world are fighting for. If she had continued with a more normal life, she would have pursued studies in political science, philosophy or economics. In preparation for college admissions, Malala cited working on her resume and taking a month-long exam in the UK as her priorities.

The conversation soon turned to the role of Islam in her life and in her stance on education. Malala denounced the notion held by the Taliban that denying access to education, as well as devastating homes and cities, was in the name of religion. “Islam means peace, wars are political,” she said. She went on to describe that, according to Islamic belief, it is not only a right, but a duty to seek an education—“a duty for all, not just the men,” she asserted.

The Q&A portion of the event used previously selected questions posed by students at local schools, with topics ranging from Malala’s fears, to her beliefs and influences. Malala’s fears are relatable and common; she hates roller coasters, and dogs frighten her—including the dog of Jon Stewart on the set of The Daily Show. She procrastinates with Candy Crush and struggles to keep her brothers out of her room.

In explaining her beliefs, she addressed men and how their treatment of women shapes their lives and the cause for which Malala is fighting, just as Malala’s unorthodox upbringing shaped hers: “Do not clip their wings,” she said. “It’s for the better future of everyone; neglecting women is to neglect the future, our society. Allowing women to have an active role is to the advantage of men.”

She knew her activism made her a target, but still pressed on. She described how she knew she was in danger regardless, and chose to speak up, rather than stay silent about the injustices around her. She imagined ways to retaliate if the time came, perhaps using words to appeal to the attacker’s humanity and stating that she wanted these basic rights for his daughter.

She stated that she has no regrets in her fight for education, though it has been embarrassing for her to speak as directly to world leaders as she has. Such was the case when she called out the President of Nigeria for his lack of acknowledgement of the girls who were kidnapped by Boko Haram. He made a statement on the affair shortly after.

The campaign for the Malala Fund calls for twelve years of free compulsory education, as well as a focus on secondary education rather than just primary. The Malala Fund is building a model school with the hope that many more will be constructed in the coming years.

Malala’s love for her country is apparent, and she spoke of her desire to return and see it changed.

“We should be proud of [our] culture of hospitality and bravery and helping others,” she said. “Culture is not coming from God in the sky. People make it and can change it when it goes against the best interest of people and basic human rights.”