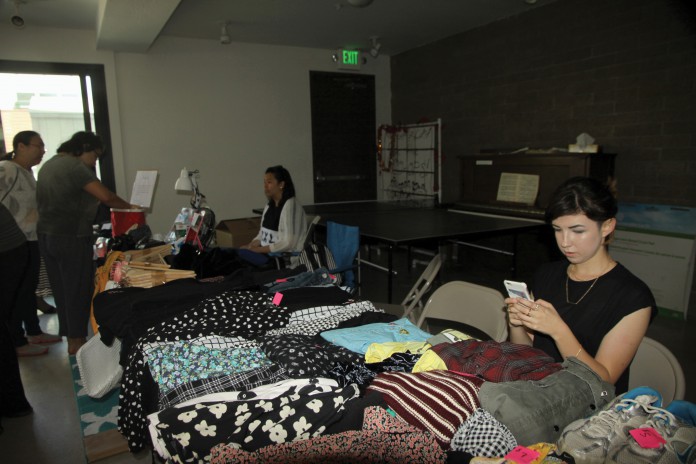 Through devoted social media marketing, Senga Park coordinated a humble yet successful Isla Vista Flee Market on Saturday, April 18. The second-year student at University of California, Santa Barbara wanted to create an opportunity for the community of Isla Vista to purchase or sell second-hand goods.

Frustrated with the ambiguous process of online bartering, Park single-handedly organized the event. Initially a clothing-swap idea, she expanded the thought to be more inclusive to all types of audiences. The venue held sales of hand made creations, posters, iPod chargers, as well as an abundance of clothing and accessories.

“When I was younger my mom would take me to thrift stores, and it was always really cool looking at everyone’s stuff,“ said Park. “I thought it’d be cool just to have [an opportunity] that people of Isla Vista could come together.”

The turn out was also better than anyone expected. Nearly 1,100 people asserted their attendance on the Facebook page. Within the auditorium of one of Isla Vista’s co-op houses, however, there was an effortless flow of 30-40 people through the doors throughout the day, captivated by the chance of a bargain. Various customers were among those that marked they would be attending the event over social media, but there was also a handful of people who were unintentionally drawn to the venue. The exact number of people that attended is uncertain—but according to Park, it exceeded any expectation she and vendors had.

Determined to sell, vendors were optimistic and open-minded. Various tables accepted Venmo, were willing to bargain, and were eager to make sales. Megan Helsel, an Isla Vista resident, heard about the event through social media.

“If this is a continuous thing, I’ll definitely come back for sure,” said Helsel, enthusiastic from her sales.

If things turn out the way they’re planned, the April 18 event will be the first of many. Though tentative, Park affirmed that she is working on making the function bi-monthly. Despite the stress from communicating with copious sellers and seeking various venues, she was assured that all of the hard work paid off. Park stated that her hopes include making the market a “regular thing so that we get to know each other in the community.”

Customers were welcoming the local atmosphere with open arms as well. Navid Yousefian, a first-year doctoral student, was one of many people who stumbled across the flee market during a stroll in Isla Vista.

“I like local stuff, local shops, and definitely supporting the artists,” Yousefian said.