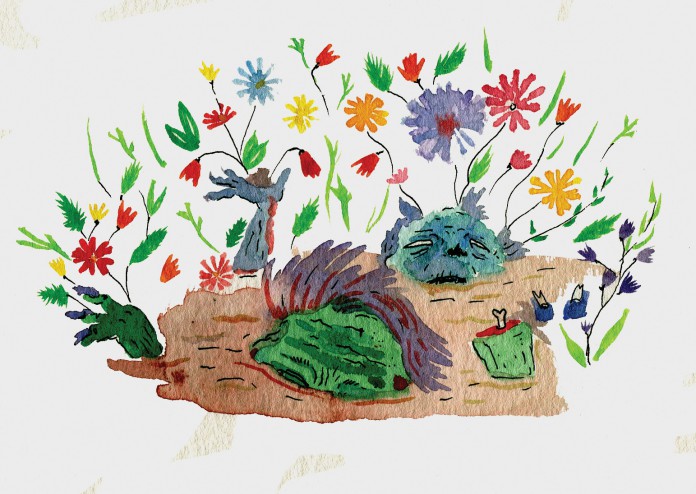 The musical Once on this Island concludes with the protagonist transforming into a tree after her death—and the Urban Death Project is making this a reality by turning human corpses into compost.

According to the official website, the process begins with the deceased being stored in a refrigerated space for up to 10 days before the ceremony starts. Then, the deceased is wrapped in simple linen by their loved ones. At the laying in, mourners enter the facility and walk to the top of the core to say goodbye. The body is then laid into a mixture of woodchips and sawdust, where the body decomposes over the next few weeks and turns into a nutrient-rich compost. This is a continuous process, as new bodies are laid into the system as finished compost is extracted from below. Loved ones are encouraged to take some of the compost back to their own homes and gardens, and the rest of the compost is used to nourish the site and fertilize plants and trees in city parks.

“Composting makes people think of banana peels and coffee grounds,” said Urban Death Project’s founder, Katrina Spade, according to the New York Times, “[but] our bodies have nutrients. What if we could grow new life after we’ve died?”

In traditional burials, bodies are drained of blood, injected with preservatives, encased in wood and metal coffins, and lowered six feet into concrete-lined graves, according to Vice. 90,000 tons of steel, nine meters of hardwood, and 1.6 million tons of concrete get buried every year in the United States alone. Cremation, on the other hand, can result in a conspicuously large carbon footprint from the sheer amount of fossil fuels released during the process.

Spade researched how to turn people into soil faster, instead of slower. The Urban Death Project was inspired by previous research on composting dead livestock; while it is possible to compost a human, what Spade says is a societal fear of decay prevents people from embracing the idea.

“You don’t get back just your person,” said Spade, according to Vice, “you’re going to get back a really beautiful material, something you can use to memorialize the person you miss. We’re all part of a collective ecosystem anyway.”

Spade has released a Kickstarter campaign to raise funds for the Urban Death Project, with a goal of $75,000.

“We aren’t just creating a new system that turns bodies into soil,” says the Kickstarter campaign page, “we are striving for an entirely new paradigm of death care. We are creating a new model where people are treated equally as they are folded back into the earth’s embrace. It is an exciting time to be alive!”