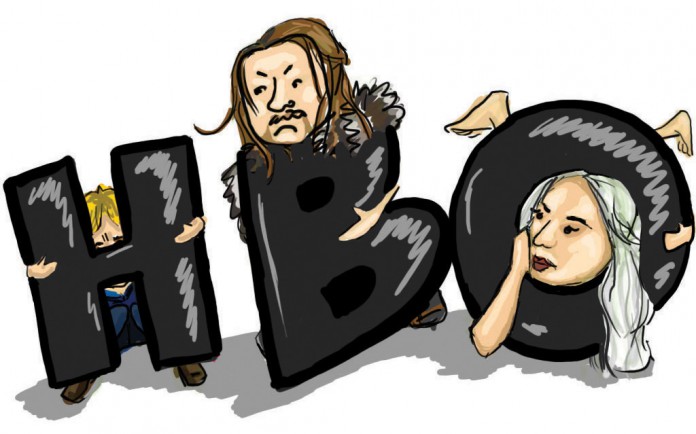 Winter is coming yet again! The fifth season of Game of Thrones, the television series based on George R.R. Martin’s book series A Song of Ice and Fire, will premiere this Sunday, April 12, on HBO.

Game of Thrones has become something of a cultural phenomenon since its debut in 2011. Positive word of mouth surrounding the show has helped its ratings steadily increase since its series premiere, which debuted at 2.2 million viewers. The final episode in season four upped that number to a whopping 7.09 million viewers, making it the most watched cable show the night it aired. Based on the show’s track record, it would not be surprising to see that number easily surpassed for the season five premiere. Note that these numbers do not take into account HBO Go, a streaming service that gives HBO cable subscribers online access to HBO’s extensive library of content, including newly-aired episodes. If those numbers were included, the amount of viewers would increase.

In fact, viewership for Game of Thrones may be even higher thanks to recent developments. Last month, HBO announced HBO Now, a $14.99 per month standalone subscription service that essentially gives subscribers the perks of HBO Go without also having to sign up for the cable subscription. Although the service has not been released yet at the time of writing this article, HBO’s CEO Richard Keplar has stated that HBO Now will be available in time for the season five premiere of Game of Thrones. While the service will be limited to people with Apple devices for the first three months, HBO Now will certainly have a positive impact on the viewership for the fantasy series.

It’s no coincidence that HBO wants to release their new service right before the premiere of Game of Thrones, as it is arguably their most popular show currently airing. Each new season is an event, and this season is no exception. IMAX theaters around the country even showed the final two episodes of season four in January in anticipation for the upcoming season, earning $1.5 million during the weekend it played.

Despite being one of HBO’s most popular shows, it is also one of HBO’s most expensive. Each episode reportedly costs around $8 million to produce, making it one of the most expensive drama series ever produced. However, it’s clear to anyone that watches the show that the budget is well spent. HBO’s rendition of the world of Westeros is stunningly realized down to the smallest details. The production value of the show is on par with the show’s complicated but well-executed narrative.

For those who might be tempted to come to the land of Westeros and Game of Thrones, it would probably be best for you to start at the beginning of the series as opposed to jumping right into season five. It is the kind of show that asks for dedicated viewership, and jumping straight into the most recent episodes will leave you undoubtedly confused. It also isn’t for the faint of heart, either, as it the show is notorious for often having gratuitous amounts of graphic violence, sex, and profanity. The show isn’t afraid to kill off characters that you love, which can often make the simple act of watching the show emotionally exhausting.

However to all of the people who can’t get enough Game of Thrones, season five is shaping up to be the series’ biggest. With so many ways for fans to watch the show, this new season looks like it is going to have the highest viewership the show has ever had. Now if you’ll excuse me, I have to go re-watch season four in gleeful anticipation.